As the owner of Highgate Hill institution Lucky Duck Cafe and Bar, Kate Smith knows what the suburb needs. For a long time, that’s been a local-produce grocer. So when the small office space next door to her cafe became vacant during Covid, Smith pounced at the opportunity.

“I’ve wanted to do this for a long time,” Smith says. “[At] the cafe we use all local farms [for our produce], so I’ve always wanted to open a grocer and [promote] “farm to face”. It’s so hard in the city to get food straight from the farms.”

At All My Friends Grocer, you might find giant oxheart tomatoes from Neighbourhood Farm nestled between rainbow carrots and spinach from Loop Growers; eggs and meat from Piggy in the Middle in the fridge alongside carrot and sesame kimchi from Redhot Kimchi; or strawberries from Mt Cotton Organic Farm with a variety of mushrooms from Little Acre Gourmet Mushrooms.

The farms are located in suburbs around Brisbane such as Oxley, Samford Valley and Mount Cotton. The proximity means most things can be picked in the morning and dropped off at the grocer within hours. Smith says the offering will continue to evolve with seasonality.

“One week we’ll have snow peas, the next it’s a bit too hot and we don’t have [them],” Smith says. “[Even] when we open five days, what’s stocked on Thursday is not going to be what was stocked on Tuesday.”

The fit-out was a team effort: one friend did the sign writing, another custom-made the tables and a group of people chipped in to repaint and move in the equipment.

The result is a small, sunlit shop bursting with colour. On the right of the entrance is a low table brimming with jars of house-made preserves and pickles, including chai-poached pears, and orange, tequila and rosemary marmalade. Loaves of freshly baked Indie Treats bread are on display next to an exposed brick wall. A large table in the middle holds boxes full of potatoes, onions and bananas, while the fridge is stocked full of eggs, meats and strawberries. Colourful plants and flowers – grown by Smith’s sister – stand out against the wooden floorboards.

In December, a new, much larger kitchen will be built out the back of the grocer, and a section of wall between All My Friends and Lucky Duck will be cut out to create an even flow between the spaces. The new menu will be bigger and more comprehensive, changing regularly based on whatever produce has been delivered that day. Events such as Tuesday Trivia – which Lucky Duck launched pre-Covid – will return, and Sunday Sessions will kick off.

As the name suggests, everyone involved in the grocer is a friend. So much so, Smith and a group of mates are heading to Mount Cotton Organic Farm in the coming weeks to help plant a whole range of produce that will eventually end up on the shelves. The link between grocer and farmer has rarely been closer. 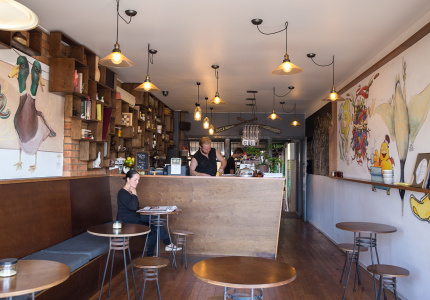