What to See at Brisbane Festival 2018 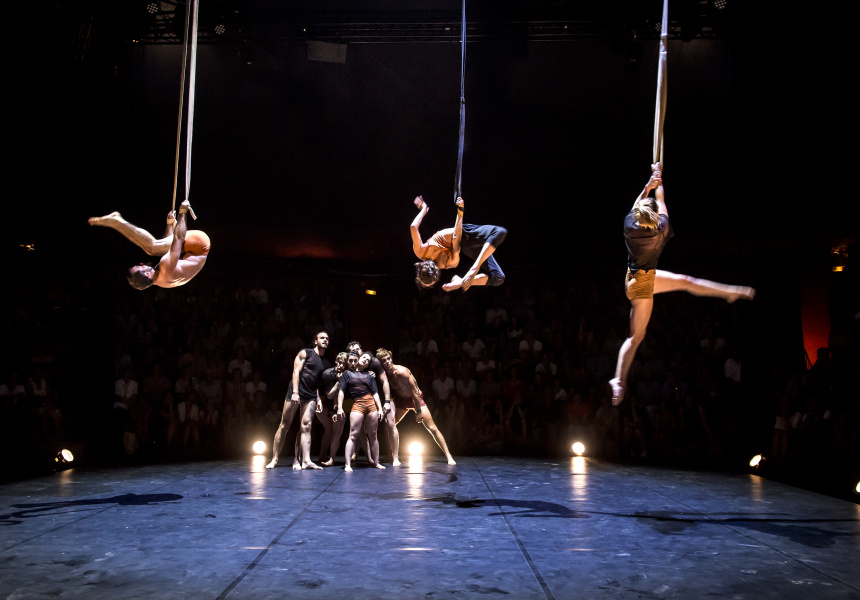 Brisbane Festival returns this Saturday bigger than ever. With an eclectic program of almost 70 shows spread over 17 venues, deciding what to see won’t be easy. Here are a few picks to help get you started.

Tkay Maidza
The Courier Mail Spiegeltent, September 15
Adelaide singer-rapper Tkay Maidza brings her rapid-fire flow and genre-busting beats to town for one night only as part of a new Australian tour.

Séance
Treasury Brisbane Arcadia, September 8 to 29
Set in a pitch-black 40-foot shipping container, this supernatural theatre show is not for the faint-hearted. Melbourne producers Realscape Productions keep the vibe creepy, merging the experience of a traditional séance with sensory and audio deprivation. Book ahead if you’re brave.

River of Light
Treasury Brisbane Arcadia, September 8 to 29
Time poor? Or just poor, poor? With a free 10-minute water, light and laser show taking place three times each night during the festival, there’s no excuse not to join in. Inspired by the Aboriginal creation story of Maiwar – a traditional word widely used to describe the Brisbane River – River of Light is co-created by the Nunukul Yuggera Aboriginal Dance Company.

En Masse
QPAC Playhouse, September 19 to 22
Circa presents settings of Schubert’s Winter’s Journey and selections from Swan Song as well as Stravinsky’s Rite of Spring, and in the process blurs the lines between dance, theatre and classical music. Swedish electronic composer Klara Lewis, Australian pianists Tamara-Anna Cislowska and Michael Kieran Harvey, and leading English tenor Rob Murray will all be performing live.

House of Mirrors
Treasury Brisbane Arcadia, September 8 to 29
Take a good, hard look at yourself and try to find your way out of 40 tonnes of steel and 15 tonnes of strategically arranged mirrors in this mega walk-through installation. House of Mirrors is by Melbourne masterminds Christian Wagstaff and Keith Courtney. It’s a simple yet cunning concept that is equal parts confronting, fascinating and frustrating.

Ode to Man
Theatre Republic – La Boite Studio, September 11 to 15
Award-winning theatre makers Emma Mary Hall and Prue Clark stage a series of personal-meets-political vignettes that explore romantic ambition and the state of modern man. Ode to Man blends projected animation, poetry and confessional storytelling to challenge conceptions of masculinity. This is the second show from the makers of critically acclaimed We May Have to Choose, seen at Brisbane Festival in 2016.

Horror
QPAC Playhouse, September 26 to 29
A young woman returns to the scene of her tormented childhood in Swedish director (and trained magician) Jakop Ahlbom’s homage to the horror movie genre. Expect loads of special effects and illusions, a striking set design and no dialogue – Horror lets the power of the genre do the talking.

My Family: Not the Sitcom
The Tivoli, September 13
Comedian David Baddiel makes his Australian debut, bringing his Olivier-nominated stage show to Brisbane for a night of truth-telling and disrespectful celebration. My Family: Not the Sitcom puts the “fun” in dysfunctional family, sharing stories about his sex-mad mother and dementia-prone father.

Brisbane Festival Closing Party
Riverstage, September 29
Finish the festivities under the stars with an all-ages gig held alongside Brisbane’s biggest annual public event – Sunsuper Riverfire. It will involve a strong homegrown music line-up including Violent Soho, Meg Mac, WAAX and Methyl Ethyl. Throw in 20 minutes of fireworks and you have the mother of all wrap parties.