Produced by Broadsheet in partnership with Jaguar E-PACE.

We all have our little hideaways around the city – those places that make us feel like ourselves. In partnership with the Jaguar E-PACE – powering you to discover your city's fearless creativity – the chef-owner of Fortitude Valley’s special 10-seat eatery Joy shares some of her favourite low-key destinations. If anyone appreciates the small, quaint hideaways of Brisbane, it’s chef Sarah Scott. Her Japanese-influenced eatery Joy – which is tucked into a Valley laneway – has just 10 seats, doing two sittings a night with a surprise set menu and optional beverage pairings.

The 36-square-metre space is split evenly between the bar and the kitchen, which means diners can see everything that happens in the kitchen (even dish-washing). Modelled after similar eateries in Japan (this style of dining is still quite rare in Australia), this close-quarters gem feels all the more special for its painstaking attention to detail and quality.

We asked Scott for her low-key favourite spots to eat, shop and play around the city.

EAT
Alba Bar & Deli, CBD
This cosy laneway bar focuses on jamón and the unlikely bedfellows of hip-hop and sherry. “They play pretty much exclusively hip-hop, and they have one of the biggest sherry ranges in Brisbane,” says Scott, who praises chef Savannah Sexton and the robust range of cured meats.

Highlights on the share-style menu are the individual baked scallops (usually done with a jamón crumb or XO sauce) and a cracker called “yesterday’s bread” (served with snapper) that she likens to puffed tuile. As for the vibe? “Not pretentious and very chill,” she says.

SHOP
Alice Nightingale, Fortitude Valley
Hidden in another laneway near Joy, Alice Nightingale’s eponymous shop is a bright, quirky oasis of handmade clothing and jewellery. “She reuses and repurposes other materials, so she’ll make shirts out of towels or curtains,” Scott says. “She unstitches wool and redyes it. And she does really funny little slogans on the shirts.”

Scott’s a fan of the funky patterns and textiles (which come in dresses, jumpsuits and playsuits); the crochet earrings (there’s a pair that says “nah mate”; as well as weekly social sewing classes in the laneway. She says Nightingale is always there in the tiny shop, smiling and stitching away.

SEE
Sunset at New Farm Park, New Farm
While scenic New Farm Park is reliably busy on a Sunday, it’s less crowded during sunset – when the view is majestic. Scott loves to picnic in the rose garden (also less crowded than other sections) as the sun dips down.

“There are rows and rows of different rosebushes,” she says. “You can also cross the road and sit up on a grassy hill facing the river. The sky down there always seems to go a beautiful orange colour at sunset.”

DO
The Brisbane Riverwalk from New Farm to the CBD
A visit to New Farm Park leads naturally into the Brisbane Riverwalk, which will take you to the CBD via an elevated walkway and bike path over the Brisbane River. You could easily spend a couple hours doing it, with lots of options for stops and detours – including ferry-assisted shortcuts along the way. Scott recommends stopping at Howard Smith Wharves and the lookout in New Farm.

With designated lanes for biking and walking, the Riverwalk – which was rebuilt in 2014 after floods washed away the original structure in 2011 – has become a popular fixture in the city. “And I think through Covid, people have really fallen in love with it again,” says Scott.

Editor’s note: If you’re drinking, leave your car at home.

Savile Row – right across the street from Joy – has no signage, just a blacked-out window and orange door. Inside is a three-level bar covered with dark wood, anchored by a stately chandelier and a library-esque spirit collection (complete with sliding ladder).

“They’re always climbing up there,” Scott says. “The service is the best in Brisbane.” Famous for its vast whisky range and hardcover drinks menu (which includes illustrations of the cocktails), Savile Row has bar seats, romantic candlelit tables and upstairs booths with table service. No wonder it’s a favourite late-night hospo hangout.

This article is produced by Broadsheet in partnership with Jaguar.
The E-PACE is a compact performance SUV that is agile, dynamic and always ready for some serious fun. Find out more about the Jaguar E-PACE here. Broadsheet and its partners encourage safe driving habits. Do not drink and drive.

Produced by Broadsheet in partnership with Jaguar E-PACE. Learn more about partner content on Broadsheet. 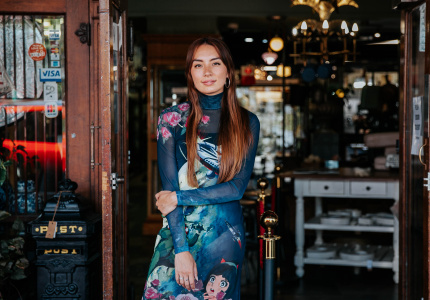 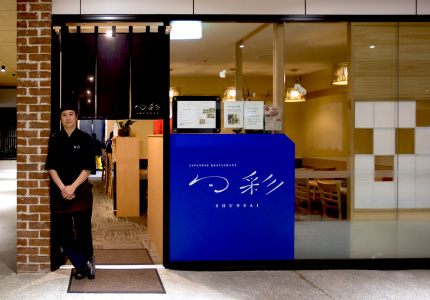