Produced by Broadsheet in partnership with Jaguar E-PACE.

We all have our little hideaways around the city that make us feel like us. In partnership with the Jaguar E-PACE – powering you to discover your city's fearless creativity – multi-talented musician and visual artist Deena Lynch (aka Jaguar Jonze) shares some of her favourite low-key destinations, from a vast vintage mecca to arguably the best yakitori bar in town. Deena Lynch doesn’t limit herself to one mode of creativity – the multi-talented Brisbanite makes music as Jaguar Jonze, illustrations as Spectator Jonze and photography as Dusky Jonze.

Even in a year where she contracted Covid-19 and subsequently struggled with her health for months, Lynch managed to release her debut EP and finish a follow-up EP, written and recorded while in hospital. She also made visual art, a short film commissioned by Christian Louboutin, an AR project for the Festival of the Impossible, and performed in a series of open-air pop-up gigs for Brisbane Festival (where she was transported on the back of a truck). “I felt like U2,” she says with a laugh.

So it’s safe to say Lynch knows her way around Brisbane’s coolest spots, whether she’s working, performing or just hanging out. We asked her for her picks on where to eat, shop and play around the city.

EAT
Bird’s Nest Yakitori, Fortitude Valley
Known for its painstaking touches – such as importing Vietnamese white oak for its grills – this West End yakitori hotspot now has outposts in the Valley and Toowong. Whether you’re catching up with friends or meeting a date, Lynch says it’s “a great umbrella for all occasions”, having celebrated her past few birthdays here.

She praises their yakitori as the best in Brisbane. “And I love that they creatively use every bit of the chicken you can possibly imagine,” she says. “Including the bottom … and it’s delicious.”

SHOP
Empire Revival, Paddington
Set aside the better part of a day to browse at Empire Revival, a market packed with carefully selected vintage fashion, jewellery, collectables and much more. Lynch likes to dig through the vinyl and the massive variety of clothing – sorted by era and culture – while taking in the sprawling historical building, which is tucked away in an unlikely spot.

“It’s this huge, beautiful warehouse in the middle of Paddington, almost like a bazaar,” she says. “I don’t even know how that space is hidden in amongst suburbia.”

SEE
Gallery of Modern Art, South Bank
Brisbane’s modern-art mecca is no secret, but Lynch’s connection to it is personal and long-lasting, dating back to before she even became a visual artist. “This is an art gallery I’ve grown up with,” she says. “Since I was in early high school, I was always going to Goma.”

Besides the obvious drawcard of the permanent collection and changing exhibitions, she points out that the building is a lovely destination in and of itself. “They’ve built this beautiful architectural space that makes for a pleasant time with friends or even by yourself,” says Lynch. “It caters to everyone. There’s always something interactive as well.”

DO
Lone Pine Koala Sanctuary, Fig Tree Pocket
This wildlife sanctuary – which is surprisingly close to the city – transports you instantly to more natural surrounds while you visit platypuses, wombats, dingoes and Tassie devils. You can also feed kangaroos and even hold a koala.

“I was born in Japan, and the first time I came to Australia I held a koala [here],” says Lynch. “When I moved here I did the same. I feel like I grew up with the koalas.”

Editor’s note: If you’re drinking, leave your car at home.

It may be a music venue first and foremost – owned by Powderfinger bassist John Collins, no less – but this converted WWII aircraft hangar is one of the city’s best drinking spots, even if you’re not seeing a gig. It’s the bar Lynch frequents most often as a muso, but she’s just as likely to spend a weekend arvo in the spacious beer garden.

“It’s perfect for that kind of Sunday afternoon gathering,” she says. “And it’s perfect for bringing your dog along. Or you could just steal someone else’s pet for the afternoon – I’ve definitely done that.”

This article is produced by Broadsheet in partnership with Jaguar.
The E-PACE is a compact performance SUV that is agile, dynamic and always ready for some serious fun. Find out more about the Jaguar E-PACE here. Broadsheet and its partners encourage safe driving habits. Do not drink and drive.

Produced by Broadsheet in partnership with Jaguar E-PACE. Learn more about partner content on Broadsheet. 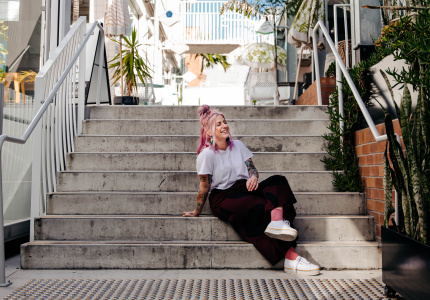