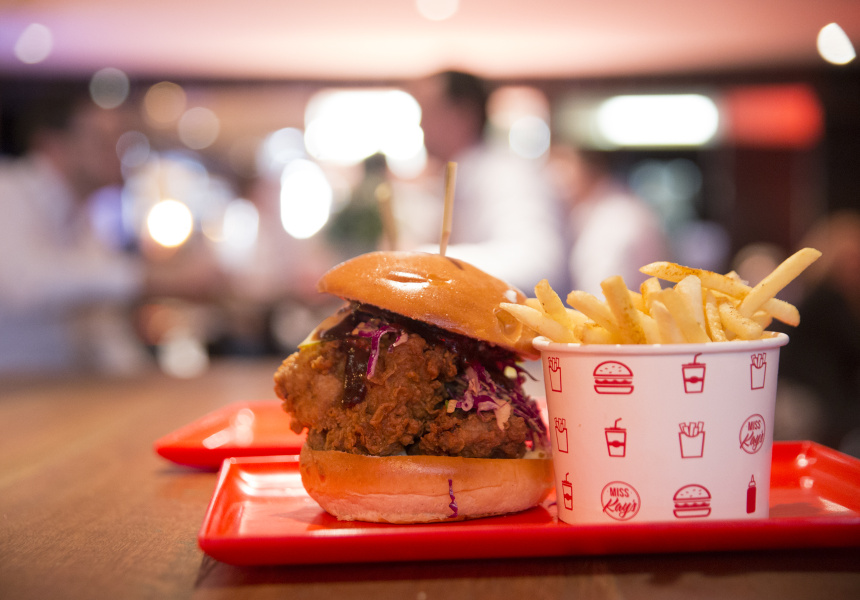 Bread, meat, cheese. Miss Kay’s owners Matt Lee and Justin Kong (both previously at Our Place and Bean) spent 12 months perfecting this golden trifecta before daring to open their Australian take on an American diner in mid-2015.

There’s a constant queue of city workers waiting for a coffee by Milton roaster Odyssey. Those with more time pull up a red-steel stool (downstairs) or red bentwood (upstairs) to drown fried chicken and waffles in maple syrup.

Crowds thicken as the kitchen starts rolling out its signature Mac Daddy burger and MK Special, though the basic cheeseburger remains most popular. Bring mates, order a beer tower (a tall, chilled tube of beer with a tap at the base) and settle in for live music on weekends.

If you dare to take up the Big Kay’s Challenge, you’ll be confronted by a bright red plastic tray stacked with a five-patty, five-cheese burger surrounded by a moat of fries. Fifteen minutes later you’ll be on the wall of fame/shame. Only seven per cent of diners finish, which isn’t as funny when you think about how much wasted food that figure implies.