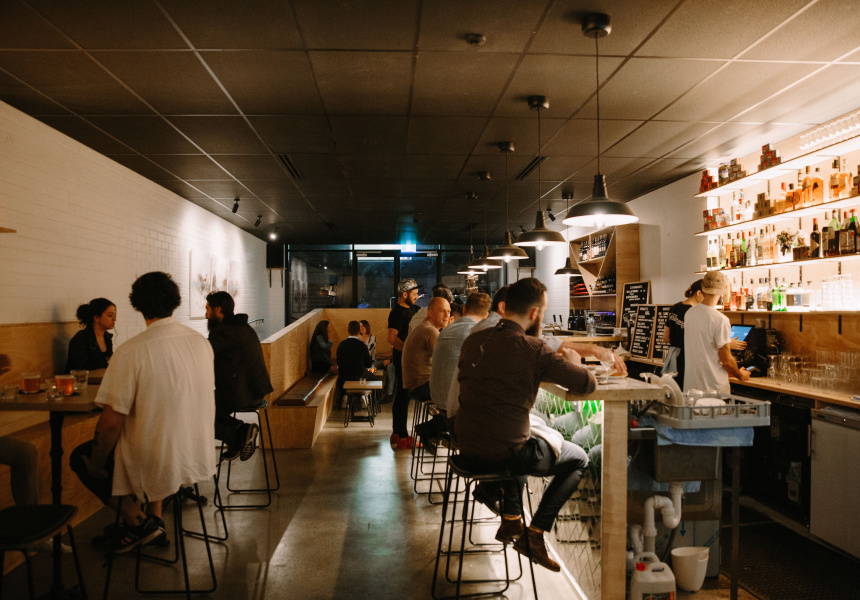 A debut venue it may be, but Fleming isn’t new to hospitality. He’s worked at Maker in Fish Lane and Sydney’s Lobo Plantation. He even appeared on Masterchef in 2014, eventually finishing fourth. The TV show appearance fed into a stint working pans at Wilhelmina’s Liquid and Larder, also in Sydney.

In short, Fleming has hung around some of the better hospitality businesses on the east coast. With Alba, he’s attempted to distill the best of them into something simple and unpretentious.

As for eats, everything is simple, unfussy and designed to be consumed with a drink in the other hand. There’s plenty of seafood, such as Movida sardines and Cuca tuna, as well as single oysters and scallops with pork hock quince gel. Fleming is also flipping croquettes, chorizo and three different types of jamon.

The full menu is available from 4pm until close. Before that there are rotating daily sandwich options using house-made sourdough. But the general rule of thumb? If the bar is open, so is the kitchen.

The venue is a neat little 50-seat brick bunker on Burnett Lane – a former storage area for Rebel Sports on Queen Street Mall. Other than the wooden detailing, low lights and bold stabs of colour, a defining feature is an enormous MF Doom print.