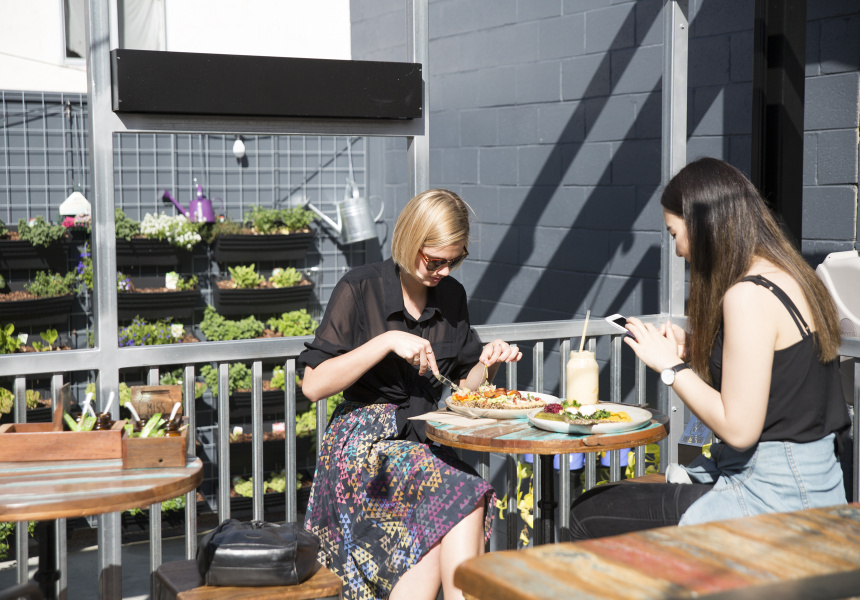 After 12 days in Sierra Leone, Jacqui Toumbas realised how good we have it in Australia. The qualified nutritionist was there to train locals for her father Louis’ charity, Paradise 4 Kids (P4K). Twenty cents from each cup of coffee sold at her cafe, Miss Bliss, is donated to P4K.

West End locals will remember the site as the former Andy’s Fruit Shop, which was there for 45 years. Andy still comes in most days to play cards with a group of his friends, including Toumbas’ grandfather and great uncle. All of them feature in a blown-up photograph, taken during the fruit shop’s glory days.

Before this, Toumbas wholesaled her nutritious Bliss Balls to cafes around Brisbane. These now form a central part of the menu, alongside the popular Not So Nutella Bowl (açaí berries, banana, hazelnuts, choc buckinis, almond milk and cacao).

Also popular is an on-the-go breakfast pot made from brown rice, coconut-almond milk and chai-tea spices. It’s based on Toumas’ grandmother’s recipe for traditional Greek rizogalo.

Family plays a big part at the cafe. Many of the herbs are sourced from the garden out back, lovingly tended to by Toumas’ great uncle. Her grandmother washes and irons the aprons delivered by her grandfather each morning. Her graphic-designer cousin did the Miss Bliss branding, and if Toumbas ever needs a fill-in, there’s always another cousin on hand.