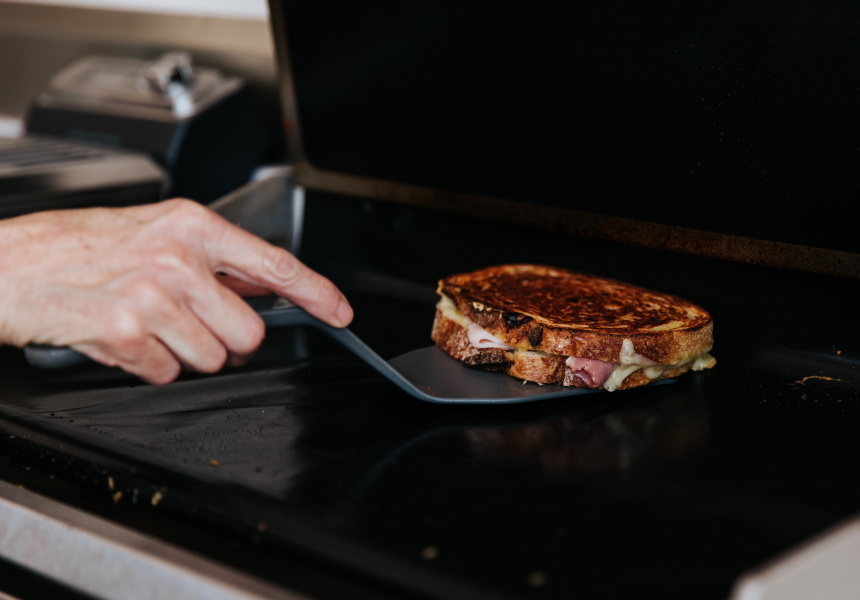 Jordan Trottemant loves sandwiches. He wanted to open up a shop that did a more Australian style of sanga – something lighter than the big American sandwiches, which can be heavy and awkward to eat. So when a small tenancy became available on Oxford Street in Bulimba, he opened Crumbs Sandwich Bar.

In terms of fit-out, there’s very little to this place other than a cute, wood-lined shack in the local Place Estate Agents forecourt and a couple of picnic tables with umbrellas. Behind the counter there’s a sandwich press, a coffee machine pumping out Blackstar espresso and a fridge full of soft drinks.

But Trottemant has invested in the grub rather than the looks. So much so that he hired star chef Ben Williamson to write the sandwich menu. The menu they settled on is the humble Australian toastie, elevated. There’s the Roma, with stracciatella, Roma tomatoes and basil; a mortadella sandwich with provolone, green-olive mascarpone and a side of radicchio; and a straight-up deep-fried mozzarella sandwich served with a tomato-garlic dip. There’s also a rotating special. The sandwiches are generously sized without being huge, so won’t leave you with a gut full of regret.