Inside the home of an Australian-art power couple. 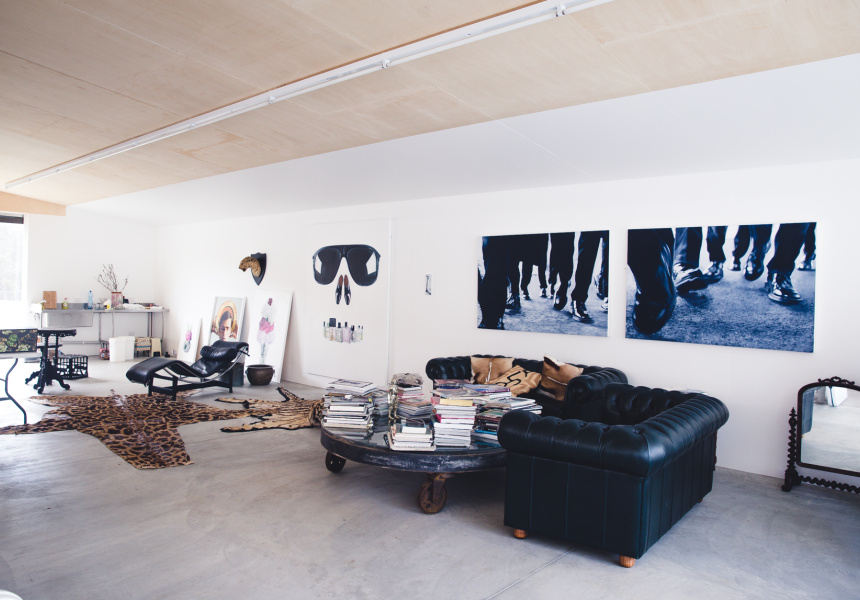 It’s on eight acres in the Brisbane outer suburb of Chandler that you’ll usually find Michael Zavros and Alison Kubler. The house at the property’s centre is a cosmopolitan jumble of a space. Walls are swamped with paintings and drawings, living areas are fattened with art books. Silver heirlooms dot the shelves along the main hallways.

The house tells of a couple’s life enriched by art and travel. But then you’d expect it to. Zavros and Kubler are a tour de force of the Australian art world. He is an artist known for vivid, visual monologues of luxury and beauty. She, a writer and curator dealing in art and fashion.

Zavros enrolled in painting class as a 10-year-old to satiate “an obsession to draw and paint everything in front of me”. The hyperrealist artist is best known for his cryptic portraits and for transforming still-life objects into playful commentaries on modern status. In Zavros’s world, Gucci ties mutate into dancing snakes. Palm leaves spread out to resemble Phoenix wings. Cologne bottles align into a toothy smile. “I like arranging my works into elaborate, nonsensical confections,” he says. “They become part design, part performance – a perfect antidote to a world gone mad.”

Kubler has built a 20-year career based on the notion that “art and fashion are what makes life sing”. Aside from curating exhibitions and writing about artists and creators for magazines, she lectures in fashion at QUT and runs an arts consultancy. Her book Art/Fashion in the 21st Century is about to be turned into a feature-length documentary.

Even though Kubler claims she has no traditional arts-making skills, she has a degree in art history and counts her personal experiments with fashion as a way to be artistic. At 11 she fell in love with a Roy Lichtenstein painting at the Tate Modern during a trip to London with her parents. “I knew in that moment that I wanted to work in the arts when I grew up,” she says.

The couple, now in their early 40s, were introduced to each other by a mutual friend at a hotel bar on the Gold Coast more than two decades ago. The Coast is Zavros’s hometown, and he was volunteering at the city gallery where Kubler was curator. “We hit it off over a few rounds of Long Island Iced Teas,” she laughs.

“All of our professional achievements have happened since we became a couple,” Kubler continues. “It’s amazing to see how far Mike has come from his university days to where he is now.”

Her husband’s successful career – with his string of art prizes, sell-out shows and overseas residencies – has helped give Kubler the freedom to raise their young children, Phoebe, Olympia and Leo while freelancing from home and choosing the projects she’s most interested in. As a writer she has profiled some of the biggest names in art and fashion, including Cindy Sherman, Margaret Zhang, Jonathan Zawada and Romance Was Born (Luke Sales and Anna Plunkett). The couple’s dual lines of work has also allowed the family to visit Spain, Italy and New York to coincide with Zavros’s residencies and Kubler’s research.

Downhill from the Chandler home sits a purpose-built studio full of paint-licked canvases, rolled-up drawings and mounds of magazines. It’s here that Zavros spends most of his time painting, clad in black Crocs and worn-out airline pyjamas – perhaps contradicting the glamorous themes of his work.

“Even though I prefer the simplicities in life, I do like painting beautiful things,” he says. “I find myself drawn to the way middle-class Australians aspire to have palatial homes and luxury cars. Maybe it’s because my dad used to take me on these drives as a kid, where we’d often pass by the Mercedes-Benz dealership. He would point out these cars on parade and tell me symbolically, ‘This is what you need to pursue’.”

Now Zavros owns one of those cars. “But of course the term ‘luxury’ has become more commonplace nowadays,” he downplays. “So, it’s not that provocative.”

Kubler certainly sees the benefit of being in an artist-curator couple. “Sometimes when I write about an artist’s work, I like to get Mike’s perspective,” she says. “At the same time, he understands from me what a curator wants in terms of artwork quality, professionalism and being on time. We see things from different sides of the coin, and we complement that.”