Inside the Hamilton home of a Brisbane fashion power couple. 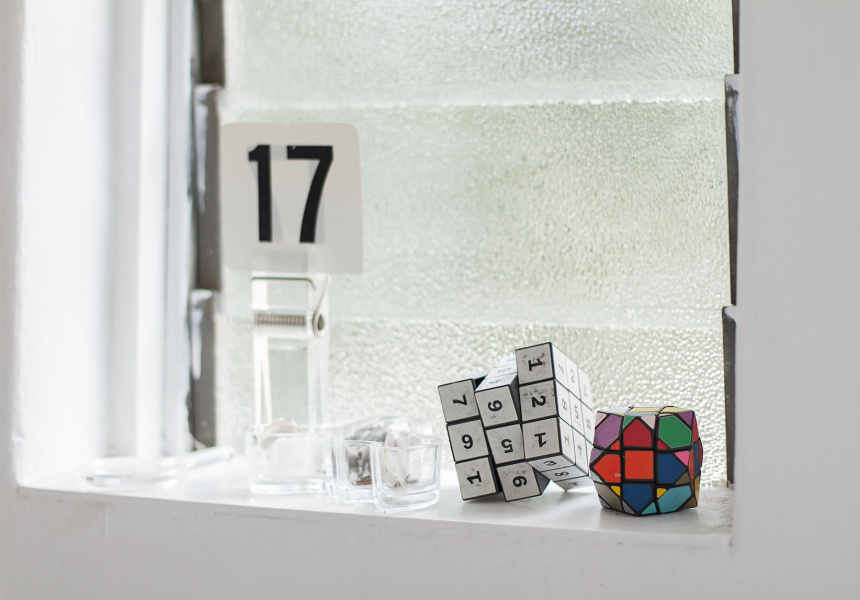 Monochromatic, voluminous and darkly romantic womenswear. That is the hallmark of Gail Sorronda. It’s a style so prized it’s been worn by the likes of Winona Ryder, Lorde and Meg Mac.

But Sorronda doesn’t do it on her own. Not quite all of it, anyway. The Filipina-Australian fine art fashion design graduate is the creative muscle of her namesake label and boutique, but looking after the production and marketing is husband and business partner, Atlas Harwood.

Sorronda and Harwood have been a couple for nine years, and long ago managed to braid personal interests into their main vocations. Since launching Gail Sorronda in 2005 at Australian Fashion Week in Sydney, the designer has tapped into her fixation with the angelic, gothic and paranormal to create dramatic collections such as Holy Water, Oh My Goth! and Angel at My Table.

When he’s not working on the label, Harwood is playing bass for post-punk brood band, Gazar Strips. He names songs after hobbies and must-see places. “I titled Spookies after my favourite surf spot, while Micronesia is a dream destination,” he explains. The band’s name came from a textile strip he found while fossicking through fabric swatches.

“Gail and I constantly feed off the same energy,” Harwood says. “When she was working on our Just Like Honey collection (an ode to bee mythology and The Jesus and Mary Chain) I happened to be fine-tuning a song called Bee Mantis … it’s natural for me to direct a lot of that influence into my music.”

“It's also healthy to have our own separate interests,” adds Sorronda, who often turns to tarot readings for escapism, or to gardening out the back of their Hamilton home and studio. Harwood finds his zen surfing at Stradbroke Island and watching AFL. “I’m training for the Community Cup,” he declares. “It’s this popular national charity event that pits musicians against music media.”

The pair met in 2007 when Harwood strolled into Sorronda’s first store at Fortitude Valley’s TCB building. He became transfixed with a Rubik’s Cube on display, only to be told by Sorronda it wasn’t for sale. Months later, while working for a professional services firm, Harwood came across Sorronda’s picture in a newspaper article about her fashion collaboration with Target Australia. A co-worker noticed an image of a musician she fancied in the same paper. “We both cut out the photographs of our respective crushes and pinned them to our work space,” Harwood says, blushing.

He would later bump into Sorronda at a bar at an ungodly two in the morning and offer to walk her home. “Then the next morning he walked me to my shop,” she says. “Atlas was quite the gentleman.”

A year later the couple were engaged and living in Paris, basing their label in the world’s fashion capital to strengthen its international presence. Their almost four-year stay saw Gail Sorronda tapped by Dolce & Gabbana to feature in its Milan boutique, and declared by Karl Lagerfield as “one to watch”. In 2012, after the Global Financial Crisis, the designer decided it was time to return to Brisbane and go grassroots with the label.

Nowadays, Sorronda is often at her flagship shop on New Farm’s James Street. “To make our business work I need to be physically present at the shop to make connections with our customers and give them a recognisable face to the clothes,” she says. Being on local turf also means she was able to collaborate with Queensland Ballet and Expressions Dance Company on costume design, attracting a new audience for the label.

In a house dominated by bolts of fabric samples and religious and spiritual artefacts, there’s just one bare room. When Broadsheet visits, Sorronda is 18 weeks pregnant, and this is the nursery in progress.

Harwood asserts that the couple have only ever fought once – “during French speaking class” – though he’s eager to see how a newborn baby will affect that harmony. Teasingly, Sorronda vows to re-watch the Netflix series Stranger Things with their offspring as soon as it’s six years old. Harwood looks aghast. “This right now could be our first parenting argument,” he laughs.

Looking around the home, you wonder if they still have the Rubik’s Cube that sparked that initial encounter. Harwood laughs. Although he didn’t know it at the time, Sorronda had actually bought it at a nearby Chinese store that peddled them en masse. “I’ve since kept the cube,” he says, beaming. “It’s here in our home as a reminder of the conversation that started all of this.”