The husband-and-wife duo combine creative passions to document their travels. 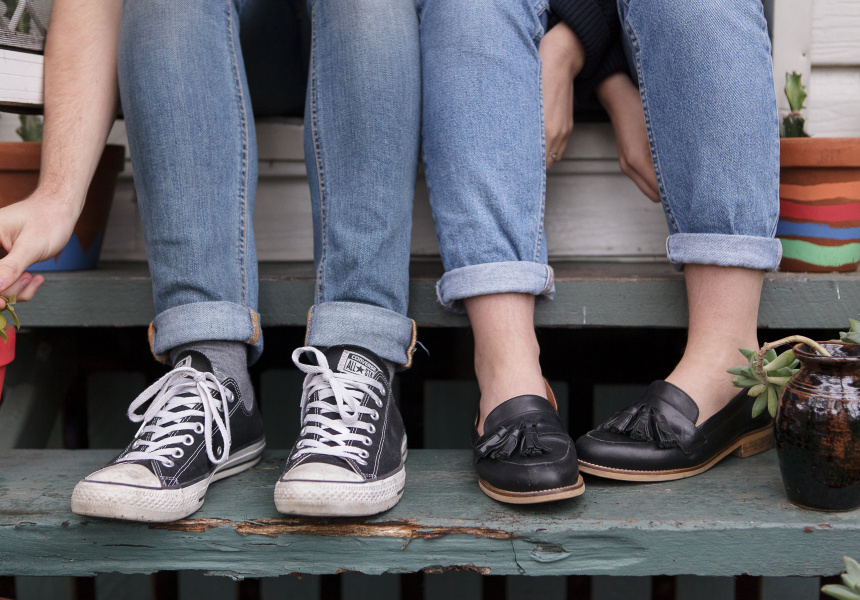 The couple’s wedding was like something lifted from the pages of one of the auteur filmmaker’s scripts. A secluded pine forest. A small wedding party. And a freak thunderstorm that drenched everyone moments after the ceremony began. “Wes couldn’t have scripted it better,” Caggiati’s mother said afterwards.

Step inside Caggiati and Webber’s Wilston home and you start to get a feel for what motivates their creative passions. The Anderson tropes also become more apparent: dinosaurs marching across the stove top, bookshelves piled high with obscure volumes, a living-room wall plastered with magazine cut-outs, ticket stubs and drawings.

Caggiati and Webber both hold jobs in the creative industries: she’s a copywriter and SEO specialist for a boutique media agency (and these days a regular contributor to Broadsheet); he owns a video-production company, creating content for education and business.

They came together initially through mutual friends, a shared passion for the arts fuelling their relationship. “There’s just this understanding between us, of the lifestyle and how we need to make it work,” Webber says.

“All of the stuff we do for fun is creative and if we didn’t have that I don’t know how we’d hang out,” Caggiati adds. “The creative stuff is what most attracts me to Andrew.”

While it’s a dream run for any aspiring creative to utilise their creative skills for a day job, for Webber it can be a challenge getting through some of the more routine workdays. “If you’re not careful it becomes the same thing each day,” he says. “I think you’ve got to get into a habit of having your own ideas in the back of your head that you want to do, to fuel that desire and learn something new.”

Caggiati doesn’t often suffer from the same problem. She’s had to develop a number of skills beyond her university qualifications in journalism and writing. “I’m not just a writer – I draw, I paint, I help make films,” she says. “So for me it’s work but also not work in one sense.”

The couple often work from home. Webber has an editing suite in the front room and Caggiati draws or writes wherever she settles for the day. They talk about their space as a catalyst for creativity – one they’ve fostered since marrying two years ago. “I think being in a really safe environment. A place of love – as lame as that sounds – is actually a good place creatively,” Caggiati says. “You’re not tortured or insecure, you have this safe place to create.”

The house is fertile ground for ideation and the planning of their next adventures. Caggiati’s just started a writing club on Wednesday nights, and the couple are thinking about turning part of the house into a gallery of material from previous trips or other assorted works.

It’s these passion projects that get them animated, and the process of working together often inspires further work. “We collaborate a lot,” Caggiati says. “I’ll second shoot for Andy and sometimes do some editing, and that’s really fun because we can teach each other stuff.”

Conversely, Webber will often be the first to read Caggiati’s writing or help her develop an idea for a drawing or painting.

Their honeymoon to Iceland was the perfect chance for the couple to experience living and working together on the road, and the trip spawned a number of creative projects – a conceptual video the couple made together, and a mixed-media zine that Caggiati is currently finishing.

For Caggiati and Webber a dream career would see them travelling more and using their creative skills to document their journey. “I don’t know what that looks like, but I think it would be really fun,” Webber says. “I want to reflect our actual experience and not just be influenced by media or social media saying ‘this is a cool thing to do’ or ‘this is what you should be doing’. The arts are more important than that.”