Brisbane has an extensive network of bikeways that can quickly transport you throughout the city and its undulating suburbs. Here are seven rides to get you on your bike. 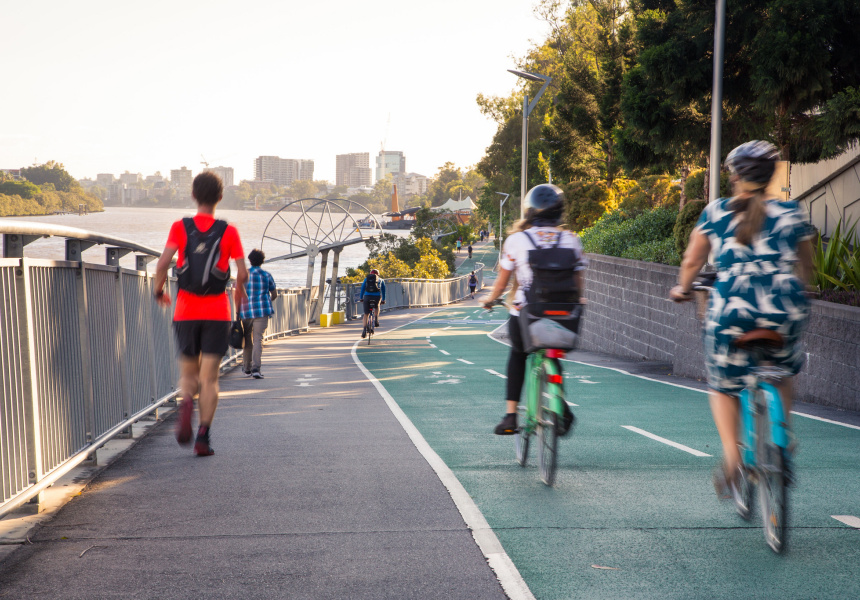 Kangaroo Point to Orleigh Park
Setting off from under the Story Bridge in Captain Burke Park, you’ll have brilliant views of the city’s financial district as you ride south along the boardwalk, past the Riverlife Adventure Centre and underneath the Kangaroo Point Cliffs.

Keep cruising and you’ll hit the busier boulevards of South Bank before heading past QPAC and GOMA for the final stretch of the ride along Riverside Drive. If you’re exploring on a Saturday, the path will take you straight through the heart of the iconic Davies Park Market. It’s a great place to grab some breakfast or lunch, but there’s also Grown and Doc Brown on the nearby intersection of Buchanan and Anthony streets if you’re in the mood for coffee and cafe eats.

Either way, throw your booty in the front basket and continue along the river to finish in Orleigh Park. This beautiful greenway on the corner of the river has plenty of shady trees and picnic areas with terrific views across the water towards Toowong and St Lucia.

There are City Cycle stations at either end of this ride, making it widely accessible.

Once past the Brisbane Powerhouse, you’ll follow the river as it curves north towards Teneriffe and Newstead. There are a number of cafes along this part of route, including Kin + Co and Yolk, but try to hold your hunger until you get to Mica, which is selling pastries, bread and coffee from a winsome spot overlooking Breakfast Creek.

You’ve already ridden a few hundred metres beyond the final City Cycle station, but if there’s plenty of gas in the tank, keep cruising along the newer Lores Bonney Riverwalk cycle path to Portside Wharf, where there’s a clutch of eateries open for takeaway food and drinks.

North Brisbane Bikeway
This ride is more of a commuter route than a scenic bypath, but it’s a great way to get to grips with just how extensive Brisbane’s bikeway system really is.

Start with a pedal past the Roma Street Parklands before turning onto the North Brisbane Bikeway. The route climbs up the hill, crosses under College Road and will have you picking up steam as you zip through Victoria Park.

From there you’ll wend your way past the Royal Brisbane and Women’s Hospital, snake underneath the ICB Bowen Hills spaghetti junction and cruise on into Windsor, Albion and Lutwyche. Here, you can either turn back for the city or really go for it and pick your way through the bucolic Kalinga backstreets to join up with the bikeway’s northern section, which navigates a series of paths and suburban street as far as Westfield Chermside.

Just keep in mind that at this point, you’re well beyond the range of the City Cycle network.

Norman Avenue to Tarragindi (or Salisbury, if you’re game)
This path starts at Norman Avenue in Norman Park and quickly works its way along Norman Creek before shooting you south towards Tarragindi and Salisbury beyond.

Stop at the cafes on the fringe of Stones Corner if you need refreshments early. Otherwise, power on through the AJ Jones and Thompson Estate reserves, slip under the freeway and continue south on towards Shaftesbury Park.

Make time to stop at Bruno’s BNE for a coffee before deciding whether to head back or hit the Tarragindi backstreets and Toohey Mountain for a trip into Salisbury – southside favourite Cups & Wells is out this way and while Ballistic Beer Co’s bar may not be open, it can at least sling you some sweet takeaway frothies.

Kedron Brook Bikeway
One of Brisbane’s best known bikeways runs for kilometres from the north-western suburbs right out towards Moreton Bay.

If you’re keen to do it properly, take your bike on the train all the way to Ferny Grove Station. From there, wind your way along the backstreets past the Keperra Country Golf Club and towards the bike path proper.

Now, prepare for an adventure as you follow Kedron Brook through Arana Hills, Everton Park, Stafford, Grange, Kedron, Kalinga and on towards Toombul Shopping Centre. At Nundah Cemetery you can either head back the way you came or continue following the Moreton Bay Cycleway all the way out to Nudgee Beach (grabbing some very good fish and chips from Pam’s Cafe 88).

The train connection means the most dedicated among you can take a City Cycle on this ride, with an easy trip back to the CBD via Toombul Station.

City Botanic Gardens to the University of Queensland
Shadow some of the more serious two-wheelers on this popular riverside route that takes you through the City Botanic Gardens, underneath the freeway along North Quay and then on to the Bicentennial Bikeway, which runs parallel to Coronation Drive.

Riding all the way to the University of Queensland may seem ambitious, but you’ll fly along the river before settling into a more leisurely pace heading through the St Lucia backstreets and onto the uni’s John Oxley River Walk.

There’s a City Cycle station near here if you didn’t BYO, but the more adventurous should keep cruising around to St Lucia Golf Links (and, once Brisbane’s bars are allowed to open again, have a drink at Hundred Acre Bar – it’s one of the prettiest spots in town) before turning back towards the city or catching a train from Indooroopilly Station.

South Bank to Brisbane Corso
The greenways and handsome residences along Brisbane Corso aren’t often visited by those who live outside this neat pocket on the river.

A good way to check them out is by cycling from South Bank along Stanley Street, on to Annerley Road and through to South Brisbane Cemetery. Yes, there’s a bit of a push uphill as you head into Dutton Park, but it’s all easygoing once you reach the cemetery and amble your way onto the corso next to the river.

Ride to the end of the road, gawking at the crazy big houses as you go, and then head back along Orlando and Hyde roads. From there, either return to the corso and back the way you came (or use Eleanor Schonell Bridge to cross over to the University of Queensland) or head a few blocks over to Yeronga Station and hop on a train back to the city.

Update: Brisbane's CityCycles will be decommissioned from February 2021 and replaced with a new fleet of e-bikes. Feeling Burnt Out and Stressed? Luxe Wellness Retreat Soma, Set in Byron’s Lush Hinterland, Could Be the Answer