Angler might just be Adelaide's most ambitious fish and chipper. Owners Amanda Prance and head chef Sam Prance-Smith (Amanda’s nephew) were spurred by a lack of quality seafood options beyond the coast. Their menu features classics such as chip butties; scallop pies; and crumbed, grilled and beer-battered King George whiting and Coorong mullet alongside smoked sashimi tasting plates; seafood sausages (smoked then grilled on the woodfire); fried prawn dumplings; and snook red curry.

All of the fish are dry-aged, a process that takes anywhere from three days to three weeks, depending on the species.

Prance-Smith trained under Heston Blumenthal at The Fat Duck in the UK. The chef’s 17-year culinary career has also included stints at Star of Greece in Port Willunga and Attica and Cutler & Co in Melbourne. His years working in high-end kitchens opened his eyes to the ongoing ethical and sustainability issues in the seafood industry.

Angler is sourcing its produce direct from local fishers through Fair Fish SA, which supplies more sustainable species such as carp and blue weed whiting, alongside the usual suspects such as garfish, barramundi and kingfish. Waste is minimised by using parts that would otherwise be discarded – prawn shells go in the stock used in a Spencer Gulf prawn and carrot soup, and fish scales are turned into crisps. The shop is also accredited by sustainable seafood guide Goodfish.

The petite space is geared towards takeaway, but there are a handful of stools and a bar-top overlooking the street for those who want to dine in. 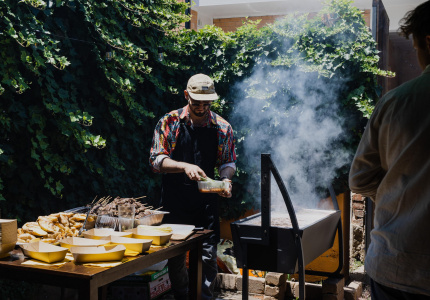