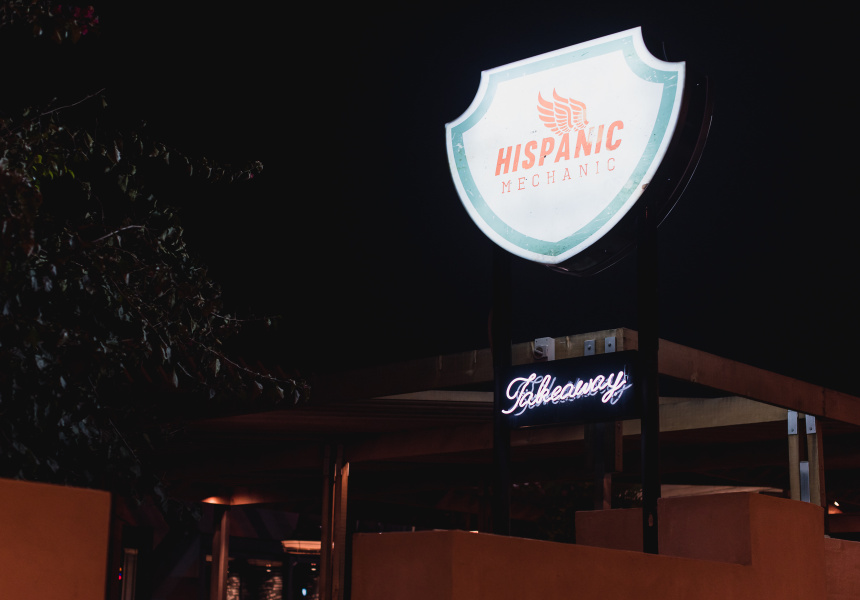 Say what you like about Walter Ventura. The man behind United Latino Cocina, Lucky Lupitas, Ruby Red Flamingo and Tony Tomatoes isn’t complacent. Hispanic Mechanic sits on the site of his former Italian restaurant, Osteria de Mesa, which was given a new name and Latin American direction in 2015 with help from chef and co-owner Greggory Hill.

Entering through the gate, you’ll first encounter a giant courtyard reminiscent of South American bars. Then there’s a restaurant clad in bright white tiles, giving it a mechanic showroom feel, and a bar that’s dark and cavernous.

Combined, the three distinct spaces are much larger than that of the southern suburbs sister venue, Lucky Lupitas. The menu is appropriately broader, too. There’s an array of tacos, plus snacks such as ceviche tostaditos and albondigas. Larger mains include crispy pork hock and black bean stew.

If you’re not wedded to tradition, a number of Korean-Mex dishes are also available, clearly marked under the guise of Master Kim. Chilli lovers, go nuts. You can spice up your meal with house-made chilli sauces, including jalapeño, chipotle and habanero, which are also available to take home from the Fuel Stop.

The bar offers a range of Australian and South American beers, plus wines from Mexico, Brazil, Uruguay and Chile. All but one wine by the glass is from South America, making Hispanic Mechanic a great place to try something new.