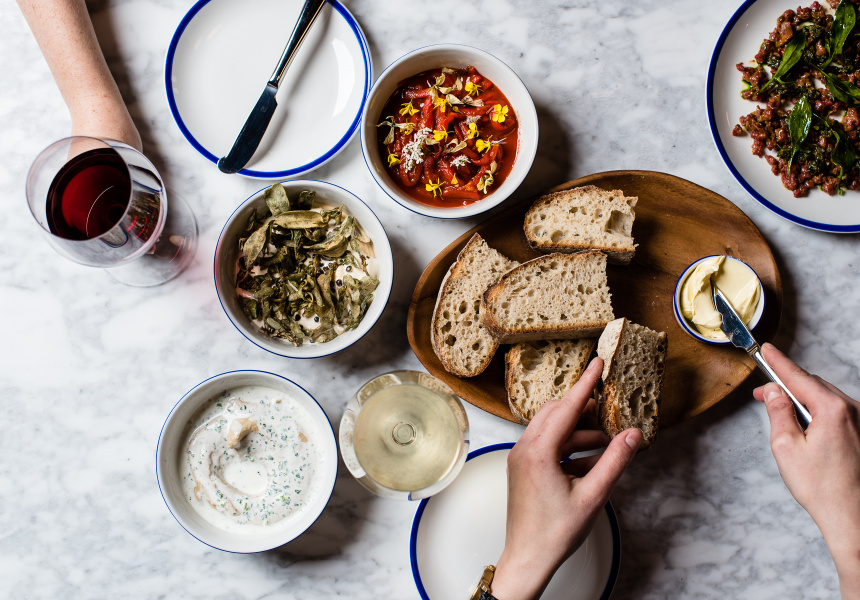 Bistro Blackwood’s menu is hardly the fine-dining spread its owner-chef, Jock Zonfrillo, presents upstairs at Orana. But that’s the point.

Zonfrillo is globally acclaimed for using native Australian ingredients and highlighting Indigenous culture and knowledge. While those flavours can still be found at Blackwood, they appear on a more familiar bistro-style menu.

The 40-strong, low-intervention wine list leans towards local producers. If you're keen to splash out you can order off Orana’s 400-bottle menu, selected by sommelier Brent Mayeaux.

The venue was refitted in late 2017 to feature marshmallow-pink and navy blue walls. The 100-seat dining is split into two areas by a wall of booth seating, creating a sense of intimacy in the generous space. The centerpiece is a glamorous, old-world bar with white marble top, navy blue detailing, and mustard and brass bar stools, designed by Zonfrillo himself.

A mural by Milanese artist 2501 has survived the rebrand. It’s a visual link between Blackwood and its upstairs sibling.