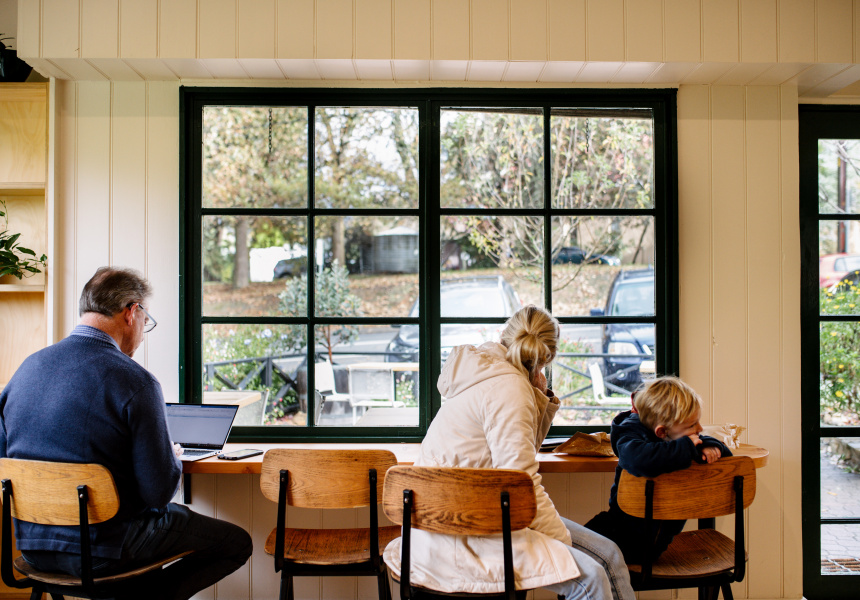 Duncan Reid is a multitasker. He's worked as a barista at Sibling, was a winemaker at Commune of Buttons and is also a noted baker. During the height of 2020's national Covid lockdowns he began selling his loaves at Sibling. The bread was a hit, so once everything reopened he decided to spin the concept off. Brid – a reference to Reid's native Kiwi accent – is the result.

Naturally, the menu revolves around bread – loaves of Reid’s organic sourdough plus sandwiches and toasties – alongside house-baked cookies, apple pie and other sweets. There are also weekly specials: a past highlight includes a stunning loaf of Jerusalem artichoke sourdough.

The result is the work of many hands: designer Alice Were worked with Reid on the venue’s layout, Jam Factory alum Nick Fuller made the cork tables, Taku Kamikawa did the joinery and Braden Murphy worked on carpentry. Bromilow, who makes leather goods under BB Shoemaker, reupholstered the stools, which are from the Salvos. Bromilow’s dad – arborist and sculptor Geoff Bromilow – got involved too, sourcing the cyprus seen throughout the venue from the Marbury School grounds in Aldgate.

The hyper-local community vibes are present in every aspect of the cafe. Ingredients (all organic and/or biodynamic) are from Hills suppliers such as Maggie’s Farm, Ngeringa and Paris Creek. And espresso coffee is by Reid’s ex-employer Mondays Coffee.