Meet Bianca: Designed-for-Delivery Pizza With its Own Delivery Service

How to tackle the pitfalls of a third-party delivery service: cut out the third party and create a service of your own. 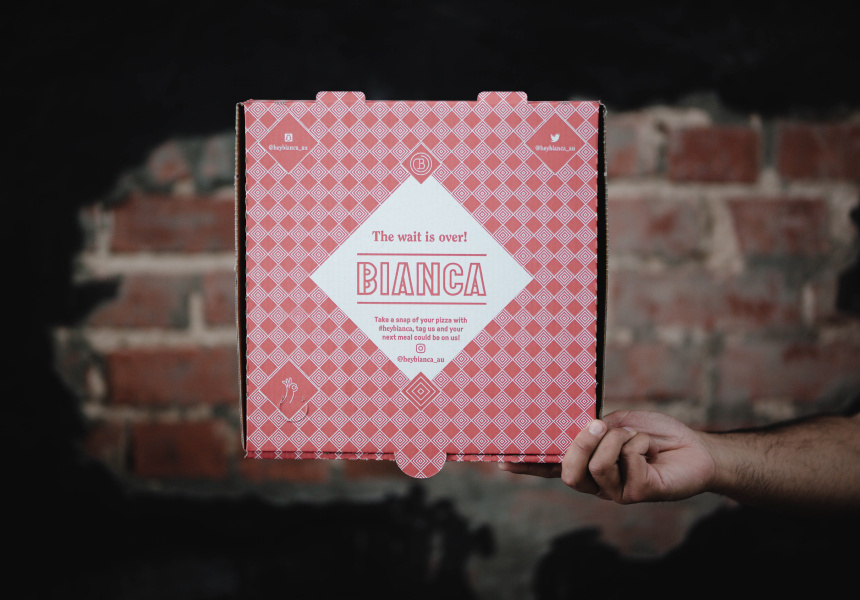 Served piping hot, Neapolitan-style pizza has a chewy, blistered crust and a super thin base that holds up under minimal toppings. But add a third-party delivery service to the mix and you run the risk of receiving a pizza that’s cold, soggy, or both.

Aman Takhar and Jason Cross know the struggle. Why? They love pizza. But more importantly, they developed and ran Mlkman: an Adelaide-based food-delivery service that launched in 2015 before shutting down earlier this year. Unsurprisingly, the closure coincided with the arrival of industry juggernaut UberEATS.

The pair’s latest venture, Bianca, is pizza designed solely for delivery. It operates out of a space on Pulteney Street that once housed the short-lived Muse Bar.

“There are a lot of people doing delivery-only … but are using UberEATS,” Takhar tells Broadsheet. “Being vertically integrated – direct to consumer – we make the pizza, do the delivery, and have built an app around that. We’re not using a third-party delivery service.” It’s something no other restaurant in Australia is doing. Cross chimes in: “The whole supply chain is ours.”

Deliverability is the main trouble spot in this industry. “I’ve got friends who turn their oven on when they [order food],” Cross says. “We’ve removed the friction from the delivery process,” motioning to a wall-mounted tablet in the kitchen. “An order won’t actually go to one of these until our driver’s 10 minutes away.” That’s how long a pizza takes to cook.

“But it’s not just about getting it five minutes up the road and it still being good,” adds Cross. “The question is: can we sit it in a box for 20 minutes, get it to a customer and they still enjoy it?” Bianca delivers within a six-kilometre radius of its CBD kitchen.

Running a wood oven is a specialised skill and, these days, pizza-makers are hot property. In the name of consistency, Takhar and Cross opted for stone-based electric ovens: they make for a more evenly cooked product. “Our dough is made in a way that allows more airflow,” Takhar says. An airier crust and base keeps the pizza warmer by letting heat circulate more freely than in the case of most other pizzas, which are made to eat in-house.

At Bianca, a pizza is boxed up straight out the oven and slid into a purpose-designed insulated bag. It guarantees a temperature fluctuation of only two or three degrees within 30 minutes.

There’s a misconception that a high price tag equals high quality, “particularly with these types of pizzas,” says Takhar. Bianca comes in at up to 20 per cent cheaper than the competition: its margherita is $16.95; a comparable competitor’s is around $23.

“We haven’t skimped on ingredients, though,” says Takhar, rattling off a list of suppliers such as Caputo flour, La Vera cheeses and Marino meats. “That shit’s not cheap … we’ve just figured out a way to reduce overheads to deliver the same product.”

The kitchen is a blueprint for future locations. “We want to do another four in the next 12 months,” says Cross, ambitiously. “The biggest thing … is access,” adds Takhar. “I live in Warradale [so] I had to be in the city to get really good pizza.” Suburban expansion is inevitable.

No stranger to a pizza project is designer Carlo Jensen of Peculiar Familia (Etica: Pizza al Taglio; Sunny’s Pizza). “We gave him a really modern, techy idea, he did the opposite, and we loved it,” says Takhar. The red-and-white diamond check revisits the quintessential Italian tablecloth.

The menu was developed in consultation with Italian-born head chef Alessandro Mazzeo, who’s most recently worked the ovens at Chicco Palms and Sicily Pizzeria.

Forty-eight-hour-proofed dough gives softness and structure to the Neapolitan pizza. Bianca also offers Sicilian, “grandma-style” pizzas with a thicker, more focaccia-like dough and stacked with toppings. “Crisp on the outside – sort of like fried – with a really nice, crunchy crust,” says Takhar. “And then it’s just soft on the inside.”

Looking to the future, the pair plans to experiment with foods that don’t typically deliver well – “like ribs”. There’s also talk of Chicago-style deep-dish pizza.

Bianca is available to download at the App Store now. Orders can be placed from 5pm this afternoon. Delivery is free until Wednesday October 11.