“The word ‘authentic’ is overused. We just want to make what we eat at home.” 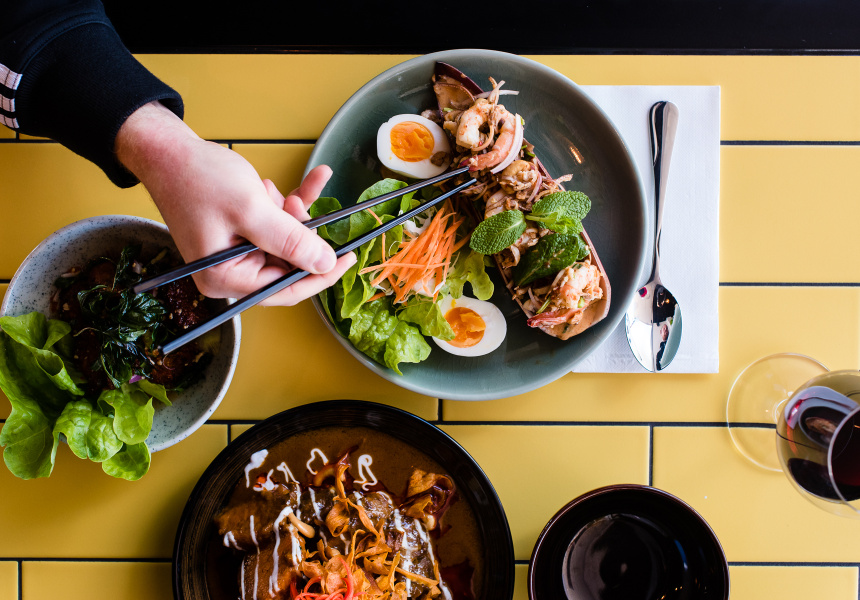 Family is the invisible catalyst behind O’Connell Street’s newest resident – a Thai restaurant that celebrates the simplicity of home cooking.

Zaep (pronounced “zap”) has a double meaning in Thai: spicy and delicious. “Hard to read, easy to remember,” Tee says, with a smirk.

Re-fitting the former chemist started with a haul of Concept Collections furniture. The trio worked backwards from there, settling on a black-and-gold colour scheme. Polishing the bare concrete floor uncovered slick stone detailing that, by chance, fitted the industrial brief. A shrine to Thailand’s king and queen connects the restaurant to its roots.

“The word ‘authentic’ is overused,” Tee says. “We just want to make what we eat at home.” Adapting a Thai dish for a Western palate can dull its nuances. “[People] think it’s all spicy and sweet,” says Tee – “all chilli and coriander,” adds head chef Ekkie – but that’s not the case.

Ekkie is an avid home-cook, taught by an aunt in Thailand, but this is his first commercial gig. Not that you’d know it. He wants to break down the (mostly Western) mentality of habitually ordering “an entree and a serve of pad thai to yourself.” At Zaep, it’s all about sharing.

The classics are served as they are in Thailand. Pork mince-stuffed sago balls are a street-food staple “you can find everywhere in Bangkok,” Tee says.

White wines pair well with Thai food, but the same can’t always be said for reds. “Our food has a lot of spice already,” says Ekkie, so the wine list steers away from full-bodied reds, opting for lighter varieties like grenache and tempranillo. Beers are all Australian apart from a token Singha.