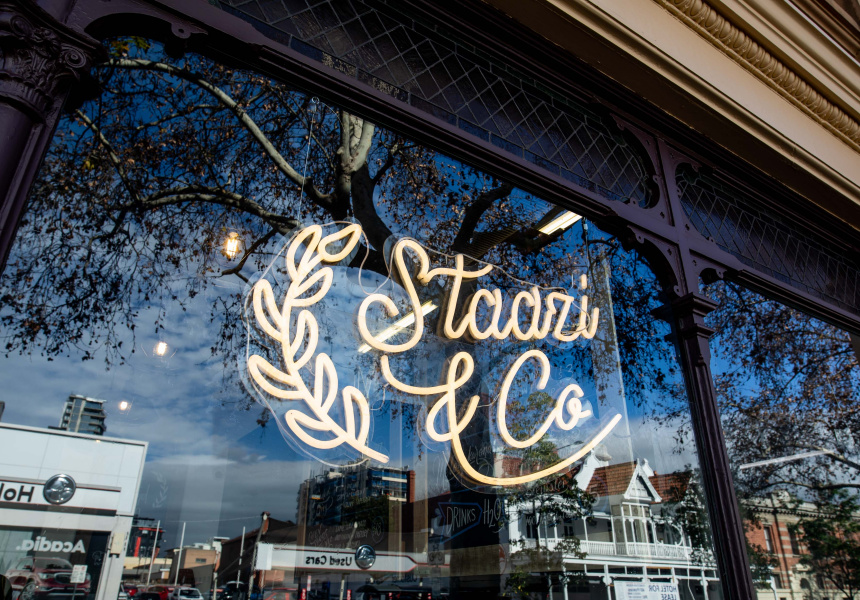 Popular vegan yiros joint Staazi & Co has set up shop in the East End after two years cruising the streets of Adelaide in a food truck.

Owner Anastasia “Staazi” Lavrentiadis opened the bricks-and-mortar shop last week in the old East End Yiros site on Grenfell Street. It'll trade as a three-month pop-up, with the option to extend the lease if business goes well (the truck will continue to operate at festivals and food-truck zones).

The building, owned by her friend’s father, was the perfect location. The fact it was previously a yiros store certainly helped. The store’s functioning kitchen was ready to go – all it needed was a lick of paint, new signage and some pot plants to freshen up the space. Panels of dark wood and diamond stained-glass windows match the cluster of buildings that once made up Adelaide’s East End Markets.

Lavrentiadis earned her hospo legs during a 13-year stint at Rundle Street’s Bimbo cafe. Later, after years of working at a call centre, she was desperate to branch out and work on a passion project. “I found the mundane world of corporate life very depressing,” she tells Broadsheet. “I was thinking, ‘What could I do to make money and … advocate for animals?’”

She took temporary leave from her nine-to-five gig and launched Staazi & Co at Adelaide’s Vegan Festival in 2017 as an experiment. But she soon realised she’d tapped into a lucrative gap in the market. “I think that reaching people through food was in my blood line,” she says. Her old-school loaded yiros offerings have generated a cult following among vegans, who have been known to follow her loyally around town.

Greek food and a vegan diet might not immediately seem like a natural fit, but Lavrentiadis says it’s not as far-fetched as you’d think. “Greeks have got a big reputation for being big meat-eaters – like lamb on the spit and that,” she says. “[But] I think it’s more … something we adapted when we migrated to Australia. If you go back to Greece, back in the day, everything was plant-based – that’s why the Mediterranean diet is considered so healthy. They would eat a lot of beans, chickpeas and potatoes.”

Lavrentiadis adopted a vegan diet five years ago after a lengthy stint as a vegetarian. From the age of 10 she struggled to accept meat-eating as “just what we do”. By creating an authentic Greek menu from plant-based ingredients, Lavrentiadis hopes to reach carnivores and herbivores alike.

“We wanted to be traditional,” she says. “If you went to Greece and bought a yiros, you’d get a thicker-style, smaller pita bread, tzatziki, lamb, chips, onion and tomato. I wanted to replicate that.”

The “lamb” is house-made from a gluten and soy-bean base with other vegetable proteins. Also on the menu is an AB snack-pack (“lamb” layered over hot chips, topped with tzatziki) and loaded fries with slaw and olive tapenade. Sweets include baklava, melomakarona (orange and walnut biscuits), rocky road and Wagon Wheels – all of them vegan.

In the store, Lavrentiadis will have help from her husband Roger, a former antiques dealer who just wrapped up his own business after 17 years and now has more time to support the expansion of Staazi & Co.

Staazi & Co will initially trade – cashless – on Tuesdays, Wednesdays and Thursdays from 12pm to 8pm.