The “casual fine dining” of Charlick’s has made way for woodfired lamb and pita, crisp fried quail, natty wines, and free ouzo shots. 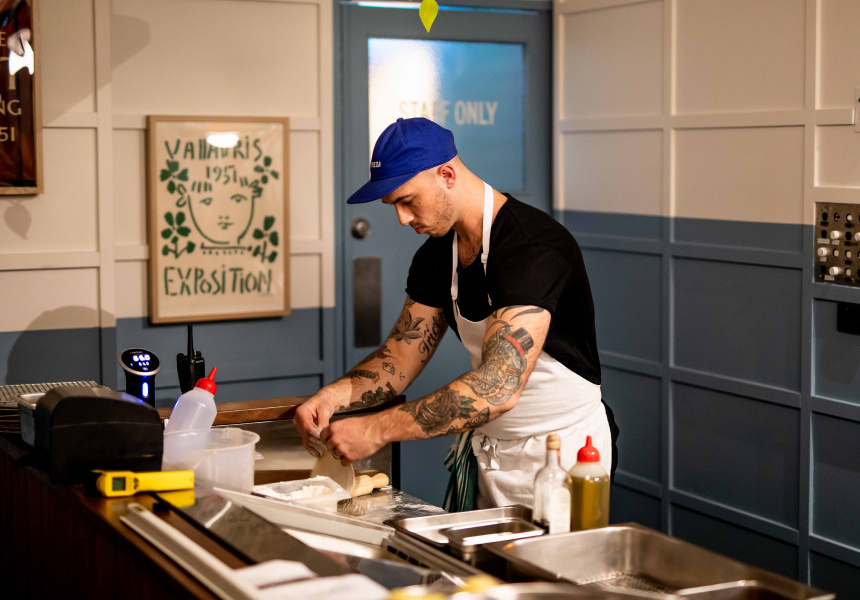 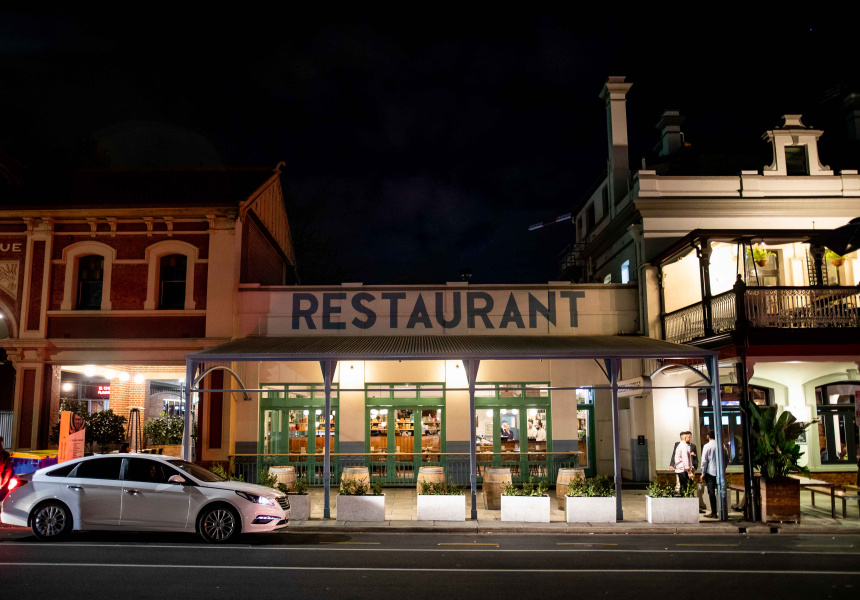 After six months as casual fine diner Charlick’s and an eight-week closure, the restaurant beside The Stag Public House has reopened as Yiasou George. The very red interior has received a cool lick of aqua-green, blue and white paint; the intricate precision of former chef Blake Drinkwater’s menu replaced with more approachable, Mediterranean-style cooking.

It’s not solely Greek, as the name might suggest; it draws on Italian, French and Middle Eastern influences too: crisp fried quail adorned with rose petals, say, or potato gratin (deceptively listed on the menu as “roast potato”) with comte cheese.

The new direction was spurred by Drinkwater’s departure and the arrival of new head chef Matt Eustis (who now works across both Yiasou George and The Stag). It’s more friendly neighbourhood diner than slick CBD restaurant, with taverna-style hospitality from warm, laid-back waitstaff who are likely to pour you a free shot of ouzo when the evening shifts into gear.

When Broadsheet visits, the first thing we notice is a shiny disco ball above our heads – a glimmering signal of the new era. Beneath it, shelves stacked with jars of olives and roasted peppers and tins of tomato, smoked mackerel and Ortiz anchovies hint at the new concept.

The Mediterranean menu was designed by Eustis and new executive chef Nathan Sasi, who oversees Brown’s portfolio of restaurants (Nola, Anchovy Bandit, The Stag and Yiasou George) and is gearing up to open Leigh Street Wine Room this winter.

“It’s good, clean, strong flavours,” says Eustis. “Food that’s been [around] for a long time, we’re just trying to do it in a contemporary way.”

The menu revolves around the newly installed woodfired oven, standing where the bar once was and firing at 400 degrees. Out of it comes fall-apart lamb shoulder, slow-roasted pork belly, king prawns, charred veggies, whole barramundi and soft, steamy pita. The latter is rolled to order, fired in the oven for just 15 seconds until it puffs up like a doughy orb and then brought to the table wrapped in linen. Tear apart and swipe through ramekins of taramasalata, hummus and baba ganoush.

“Across the board, everyone is raving about the pita,” says Eustis. “And the dips. They obviously go hand in hand. That promotes the style of service we’re trying to push as well – that sharing style.”

“The trick to [the bread] is it’s quite a yeast-heavy dough, so that’s how we get it so nice and proved and puffy and light and fluffy in the oven,” he adds.

Back to that quail; the double-coated ultra crisp bird throws down the gauntlet to Nola’s hugely popular fried chicken next door. The show-stopping quail is de-boned, butterflied, and brined for an hour (“to get some flavour into the quail and keep it nice and moist”) before a stay in the fridge overnight. It then gets a double coating of wet-flour batter and a dry-flour mix. “That’s how you get that real crispy, crunchy coating,” says Eustis.

Then it’s fried and slathered with a sweet and spicy butter sauce and tossed through roasted sesame seeds and rose petals, “to give it that aromatic nutty flavour”, says Eustis. It’s a must-get.

Dessert, if you make it there, might take the form of golden loukomades (deep-fried dough balls) with cinnamon and honey custard, white-coffee parfait with caramelised filo pastry, or a kitsch chocolate terrine with fig brandy and whipped-cream rosettes. There’s also a first-class wine list with minimal-intervention producers from here and interstate including Jauma, Ochota Barrels and WA’s Brave New Wine.

This article was published on May 21, 2019. Menu items may have changed since.