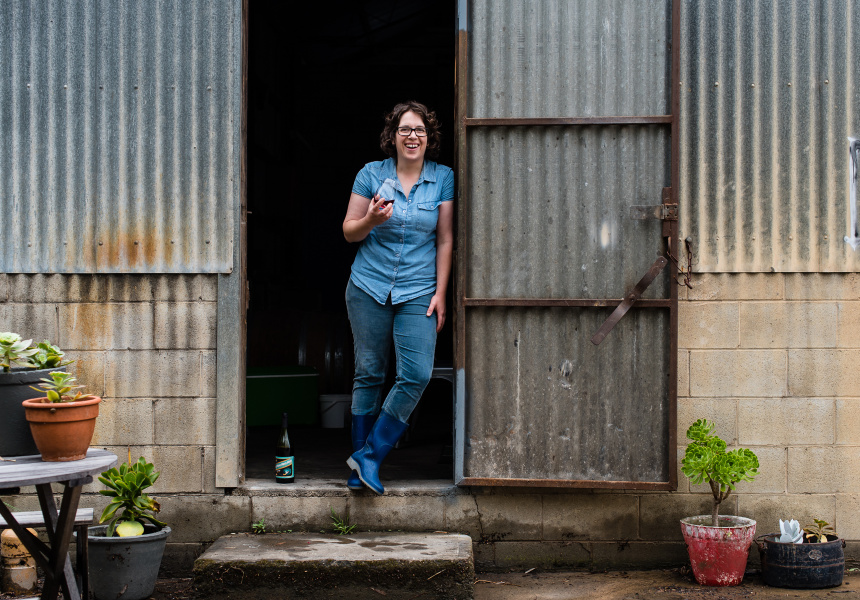 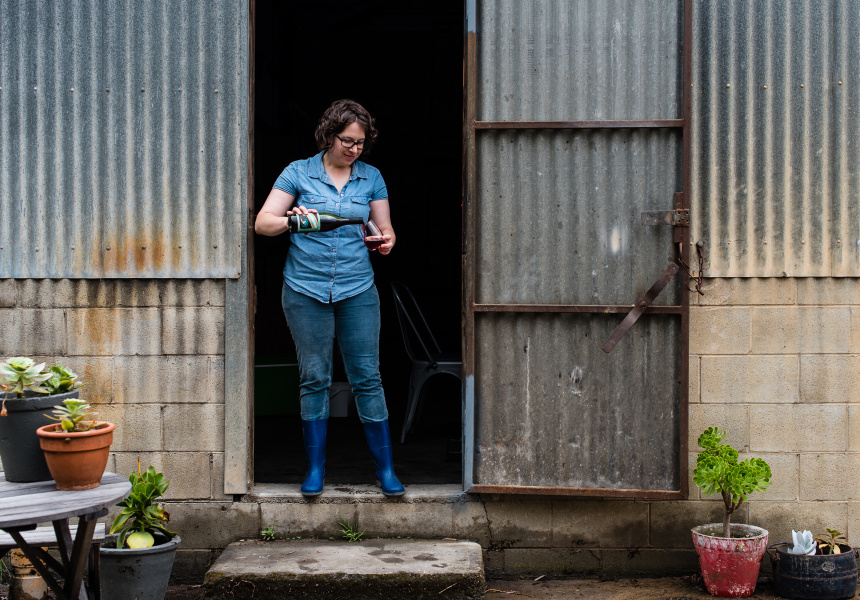 Behind a defunct timber yard at the edge of Nairne in the Adelaide Hills sits an inconspicuous iron shed. The modest setting, nestled between a disused meat factory and a quiet residential street, is home to some of the state’s most exciting wines.

Oak barrels of fermenting juice occupy the space. Standing among them is winemaker Vanessa Altmann. She’s still in the process of moving in when Broadsheet visits. It’s the final phase of a big year that saw the recent Young Gun of Wine finalist turn her attention to her own label – NASAA-certified Switch Organic Wine – full time, leaving behind a 15-year role at established Fleurieu winery Temple Bruer.

“I was seeking a bit of autonomy in the wines that I was making,” says Altmann. “When you work for a larger company you have to fit the mould of what they’re expecting, and what the customers are expecting of that brand. I wanted to do my own thing and make my own little batches.”

She’s less concerned with targeting specific varietals and regions (“I’ve just seen opportunity through the grapes that are around me and tried to make a delicious wine”) though preferences reds “… purely because I feel I can get a better result.” The current line-up includes tempranillo, shiraz, pinot noir and petit verdot, an often-neglected varietal that Altmann submitted for the Young Gun awards.

“I kind of have a thing for the block of grapes that has been forgotten a little bit,” she says. “I don’t really like wastage, so that always factors in.”

Altmann’s only pre-requisite is that the fruit is organic (meaning no herbicides, pesticides or fungicides are sprayed on the vines). “I suppose, growing up at Temple Bruer, that was always instilled in me, the organic ethos,” she says. “I started working there when I was 19, so I’m not sure if I would have gotten interested in organics anyway, or what came first. Either way, it’s a part of what makes a wine special to me.”

Soon all Switch wines will be preservative-free, too. But Altmann’s hesitant to lump them under the “natural” banner. “I try to distance myself from that,” she says. “I feel like it’s being overused at the moment. They are in fact natural wines, but I wouldn’t bang that home.”

She sources fruit from all over: Eden Valley, McLaren Vale (“There’s a lot of squeaky-clean, organic growers down there”) and Currency Creek in the Fleurieu. Her pinot noir is made with grapes from the former; a region not typically associated with the cool-climate varietal. “It’s quite a warm climate to be growing pinot,” says Altmann. “I’ve been working with that plot of grapes for six years now and the first ones that I made tasted like cabernet, not pinot. You can get a lot of tannin out of that region, so to bring it into [a lighter] pinot style is quite challenging.”

Her open-arms approach requires flexibility and creativity. Rather than reject the fruit, Altmann harnesses the juice through “carbonic maceration”. “[It’s] where you don’t crush the berries,” she explains. “You put them in a vessel, close it up and gas it out with carbon dioxide, so fermentation will start inside the berry, rather than crushing it and extracting the juice. So you get a lot less tannin and you get softer tannins … and a different flavour profile, too. It’ll taste a lot more confection-like – like a lolly-aisle situation.”

Getting “nitty-gritty with the wine again” is what pushed Altmann to start her own label. “When I was making wines in a large winery, it’s 30 times the size, so you can’t manipulate things as fast and react as fast to what’s going on,” she says.

Nowadays she tastes the fermenting wines three or four times a day to keep things in check. “I’ve learnt to trust my palate more, and to pay attention. Because it’s really easy not to pay attention to your palate, to go through on autopilot and just kind of read the numbers. I still have to catch myself, even now.”

The rest of us now have a chance to taste her wines, too. Altmann’s new workspace will double as a cellar door (by appointment only). You just have to find it first.