Where Top Adelaide Chefs Get Their Fish’n’Chips

Celebrate the warm weather with these expert recommendations for the best fish’n’chippers around Adelaide. 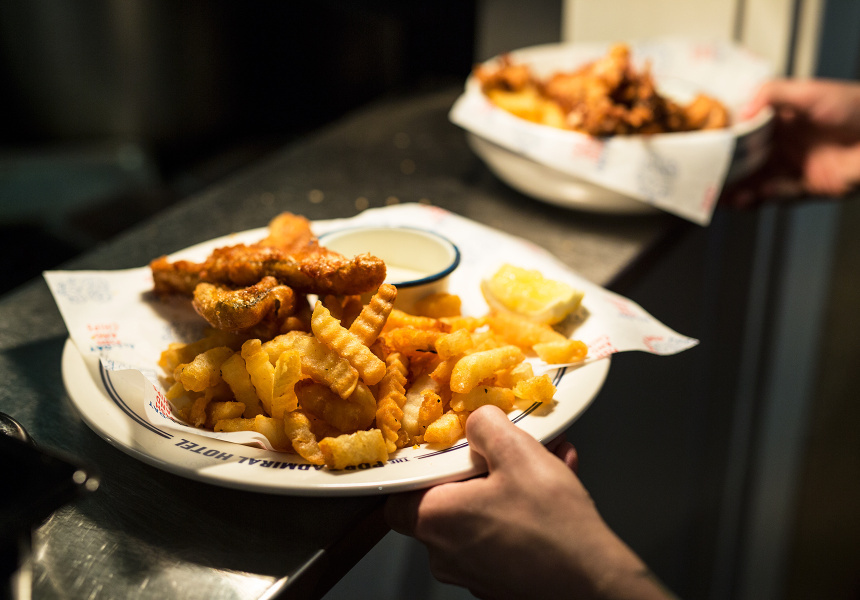 For many Australians, it’s simple: summer means fish’n’chips. And whether you prefer yours crumbed, grilled or battered, there are few pleasures that rival unwrapping a tightly wrapped parcel of golden fillets and perfectly fried chips that break with a satisfying crunch. Add a couple of lemon wedges, some tangy tartare sauce and a trademark Adelaide sunset and you’ve got the perfect summer evening.

From old school beachside joints to a pub front bar and a busy shopping precinct, here are some of the candidates for Adelaide’s best fish 'n' chips.

So it’s been nice to have some traditions that remain unchanged, like fish 'n' chips at Henley’s Stunned Mullet. “Living in Brompton, that’s my closest beach and whenever I have fish 'n' chips I have to eat it on the beach so I usually take the dogs down and have it on the foreshore.”

You won’t find mullet on the menu, but there are plenty of other options. “They generally work with eight different types of sustainable local fish and say when it's caught and where it’s from, which I really like.” Spiby describes the shop as “one of the forerunners in sustainable fish 'n' chips”. “It’s a husband and wife duo and they’ve been in the business for a long time now. It’s hard to keep to your morals and ethics in this industry and they’ve influenced what a lot of other people are doing. But they’re not trying to be super cool. I like that they’ve kept it as a traditional fish and chippery, it’s still family-friendly.”

Soto’s – Krish Dutt, Joe’s Kiosk and West Oak Hotel
Before he started a globetrotting career that had him cooking for Jordan’s royal family, Krish Dutt spent years as a chef in New Zealand.

“The way they serve fish 'n' chips there is quite rustic and I was reminded of that by way they wrap everything up at Soto’s,” he says. “I really liked that.” The multiple layers of butcher’s paper are in keeping with the low-key nature of this suburban icon – a place Dutt discovered entirely by accident.

“During the covid lockdown I was walking my dog through Semaphore and I saw a massive line of about 40 people. I asked what was going on and they said they were waiting for fish 'n' chips so I decided to get some.” Three quarters of an hour later, he was tucking into a fillet of gurnard with chips that had been cut that morning before being doused with a house-blended chicken salt. The verdict? “It was worth the wait.”

Port Admiral Hotel – Kane Pollard, Sol
At Topiary Kane Pollard made liberal use of the onsite garden and as head chef of SkyCity’s new rooftop restaurant Sol he now employs a full-time forager. So it’s no surprise that when he eats out, he wants to know where the food comes from.

“For me it’s all about sustainability. At a lot of fish 'n' chips shops, you don’t know where the fish has come from or what it is,” he says. That’s why his go-to is the Port Admiral, even though it’s a 45-minute drive from his home in Gumeracha.

“They put a lot of effort into sourcing local, sustainably caught fish and trying to use something a little different to everywhere else.” As a result, what’s on offer changes from day to day. “They had tommy ruff on when I was there last, which I hadn’t had in fish 'n' chips before. I don’t know why, because it was delicious!”

Served with thick-cut chips and house-made aoili, the fillets are encased in batter made with the signature Port Local beer. Unsurprisingly, Pollard likes to enjoy his with a freshly-poured schooner in the front bar.

Fish Out Of Water – Ragini Dey, Ragini’s Spice Kitchen
Ragini Dey is no stranger to experimentation, having introduced Adelaide to dishes like the “silly but delicious” naanchos at her Hutt Street eatery Naancho Naancho Man.

And when she gets fish 'n' chips, having plenty of options is more important than feeling the sand beneath her toes. It’s why she recommends Fish Out Of Water, tucked between the homewares stores and salons of King William Road.

Fish 'n' chips may never be a truly healthy dish, but this is as close as it gets. “I like that there’s a great choice of fresh, colourful salads,” she says. Other options such as chargrilled fillets and gluten-free batter cater to the Hyde Park crowd. The menu has some unusual options including barramundi and Atlantic salmon but Dey usually opts for something more local. “I always like to see if there are specials, something that’s South Australian and fresh.”

Coorong Cafe – Brendan Roach, Kuti Shack
Running the kitchen at Goolwa’s laidback seafood diner Kuti Shack means that Brendan Roach knows a thing or two about fresh, local seafood. And he’ll be serving plenty of fish 'n' chips from the restaurant’s newly opened kiosk this summer. But when it closes on Wednesdays he’s free to head down to Coorong Cafe at Sugars Beach on Hindmarsh Island.

“Like us, they only use fresh local produce and it’s just a little food van,” Roach says. But despite that, “They have a lot on offer: scallops, prawns and plenty of types of fish like Coorong mullet, mulloway, whiting and flathead.” Even better, everything they sell is from South Australia, down to the ice creams.

It’s one thing to ensure there’s local seafood on the menu; at this bright blue van opposite the Murray Mouth you can just about throw a line in and catch your own. Located right on the waterfront, there’s a great atmosphere with live music on Saturdays during summer and $5 drinks from 3pm to 5pm every day. “If it’s full you can even take your own chair over to hang-out and enjoy the view.”