Including a brew made from rye bread and a colour-changing beer. 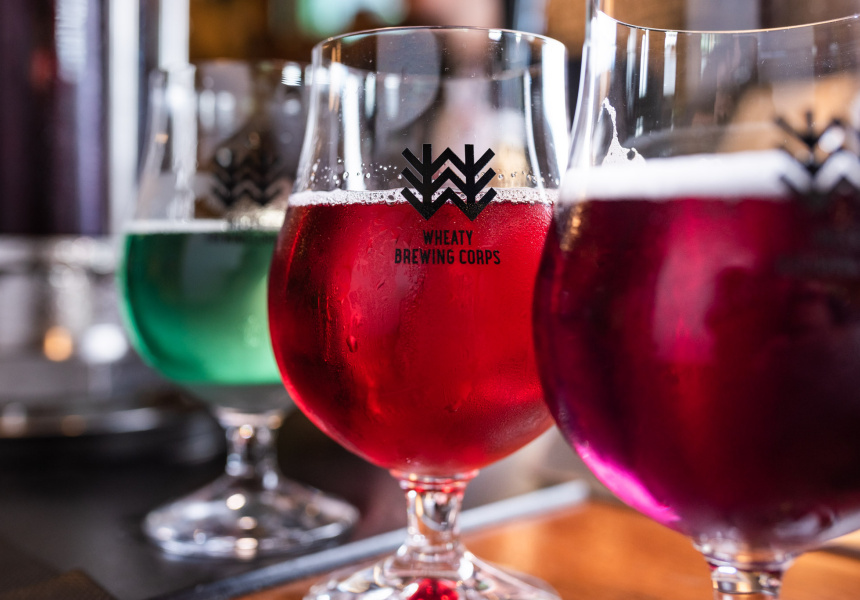 When Bavarian brewery Weihenstephan’s head brewer, Tobias Zollo, collaborated with Wheaty Brewing Corps in 2016, the two institutions had 978 years of brewing experience between them. Nine hundred and seventy-six of those years came from Weihenstephan, which is said to be the oldest continually operating brewery in the world. Looking back, Wheatsheaf Hotel publican Jade Flavell says, "I'm still quite amazed that he agreed to collaborate with us, this little shithole pub in the western suburbs of Adelaide.”

So why would one of the world’s most venerable breweries want to be associated with a two-year-old operation in Thebarton? When Flavell (along with the late Emily Trott and Liz O’Dea) took over the Wheatsheaf Hotel in 2003, she set about turning it into a venue that celebrated good beer in all its forms. Soon, it grew into one of Australia’s most respected craft beer venues while retaining the feel of an old-school pub with live music, darts and comfy couches by the fire.

And perhaps the most old-school idea of all is drinking beer in the shadow of the brewery where it’s made. So in 2014 Flavell opened a small brewery at the back of the tin shed “shanty town” that hosts gigs and functions. It has since grown to produce 100,000 litres a year, and “99 per cent” of that is sold at the Wheaty.

Doing everything in-house means Flavell and brewers Rose Bartholomeusz and Steph Cope are in control of every aspect of production, from brewing to pouring, giving customers the best cared for and freshest beer possible. Her sincere excitement at having her own keg-washing station is testament to how much she cares about beer, and it’s this dedication that brings brewers from all around Australia (and the world) to Thebarton.

For Flavell, “the whole point of having a brewery is to be able to play and experiment and have fun” and the brewers have certainly done that. Since launching, Wheaty Brewing Corps has made around 100 different beers of every imaginable type.

That means the occasional “silly beer”, such as the collaboration with Pint Of Science, Litmus. Brewed with butterfly pea, this hoppy American wheat beer changes colour at different pH levels. When poured, it has a “beautiful, deep indigo colour” but add lemon juice and it turns pink, and bicarb will turn it blue again.

Another upcoming project isn’t even beer. Kvass is an Eastern European beverage made by fermenting rye bread. Their version uses 60 kilograms of dark sourdough rye toast from Langhorne Creek’s Small World Bakery alongside a variety of malts and the resulting brew “tastes like sourdough rye: tart and doughy with a lot of spice and fruit.” It’ll be launched at the brewery’s fifth birthday on July 7 alongside two other collaborations: a mixed-culture quandong saison and a raspberry-chocolate brownie Russian imperial stout.

But while experimentation is encouraged, Flavell is firm that novelty value isn't enough. "We play silly buggers all the time, but the aim is always to produce a beer worth drinking. If I'm not happy to sit down and drink that beer then I won't do it, and I won't put shit in there just for the sake of it."