After a Two-Year Delay, Viet Next Door Is Finally Open in Pennington

When Ben and Linda Phan’s parents opened Vietnam Restaurant in 1984, the family lived in a shed out the back. Now, next door, the siblings have built on the Phan story with a modern, culture-clashing spin on Vietnamese food. 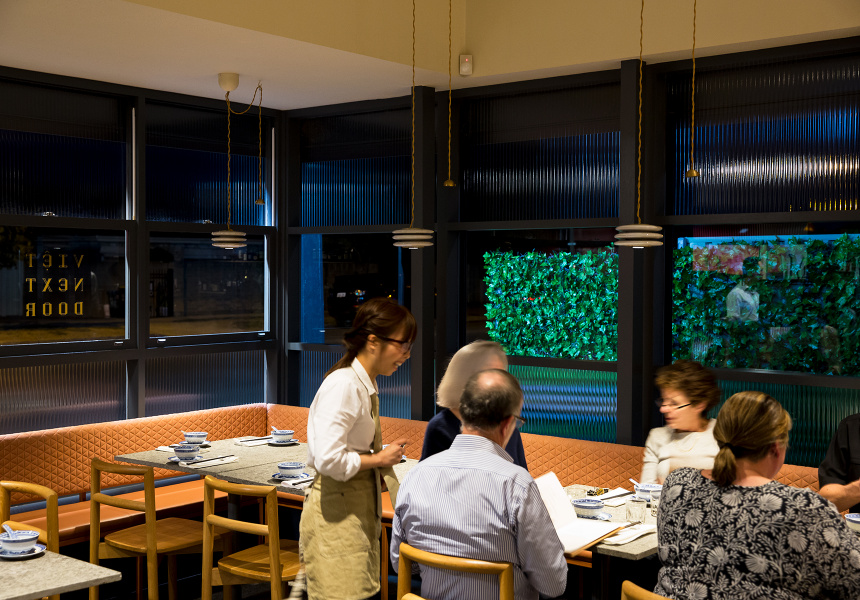 When Viet Next Door’s fit-out was completed in 2017, it won and was shortlisted for more than a few national design awards – before it was even open. But that was the last thing on the owners’ minds.

Ben and Linda Phan’s modern Vietnamese restaurant, next to the old-school Vietnam Restaurant in Pennington, which they run with parents Dinh Phan and Suong Ho, has only just opened – almost two years later.

When Dinh was diagnosed with cancer in early 2017 everything ground to a halt. “We nearly lost him three times,” says Linda. Now their 74-year-old patriarch is in remission, and still pops into the restaurant regularly. Ever the overseer, “He can probably see us on camera right now,” says Linda. We’re sitting around a booth in Viet Next Door. “When you leave he’s gonna ring and ask what we were doing.”

Vietnam Restaurant is an Adelaide institution, but that wasn’t always the case. When it opened in 1984, after Dinh and Suong came to Australia from Vietnam by boat, the going was tough. They lived in a shed out the back, raising three children, for more than a decade. But the tough got going, and never stopped. Ben and Linda glow with gratitude for their parents. From nothing, the family has built a humble empire in their little pocket of Adelaide’s north.

Yin and yang – that’s how Ben sees Viet Next Door and Vietnam Restaurant. The yin, designed by Genesin Studio (in collaboration with Ben, who studied architecture), is neutral toned, sheathed in granite, and not what you’d expect to find on Addison Road.

Each exquisite eggshell-mosaic table took months of tedious work. Salvaging eggshells from Vietnam Restaurant, Ben and his team meticulously removed both membranes and laid each tiny sliver out piece by piece. Use your coaster, please.

Like the fit-out, the menu – which was originally three times as big – has been lying in wait. After clocking off next door Ben would burn the midnight oil recipe testing. The lettuce-wrapped cheeseburger spring rolls come with a sauce Ben says is “bang-on”, and the chicken wings are done in an impossibly crisp batter he spent months perfecting.

This is modern Vietnamese that pays mind to Ben’s mum’s recipes. But where that clashes with other cultures, the menu gets interesting.

Bo kho is a hearty, spiced-up beef stew “every Vietnamese family grew up with”, Linda says. Instead of crusty bread or egg noodles, in it float pillowy gnocchi that are hand-rolled daily. Tomato fried rice, a Vietnamese staple, takes a slightly different form here – encasing mozzarella to form an arancini ball.

The Vietnam-branded, $33-a-bottle pinot grigio and shiraz are very wallet-friendly. But they’re “house price not house quality”, says Ben, who uses both – cleanskins from the Coonawarra’s Majella Wines – in the kitchen. Two taps pour Coopers Session Ale and Asahi Black, plus cocktails are shaken up with punchy flavours such as yuzu, tamarind and Asian celery. Try the bourbon-spiked “Negroni”.