Turn One of Your Coffees Into Food and Clothing

For one day this month your everyday coffee can benefit those in need. In partnership with CafeSmart, we find out how. 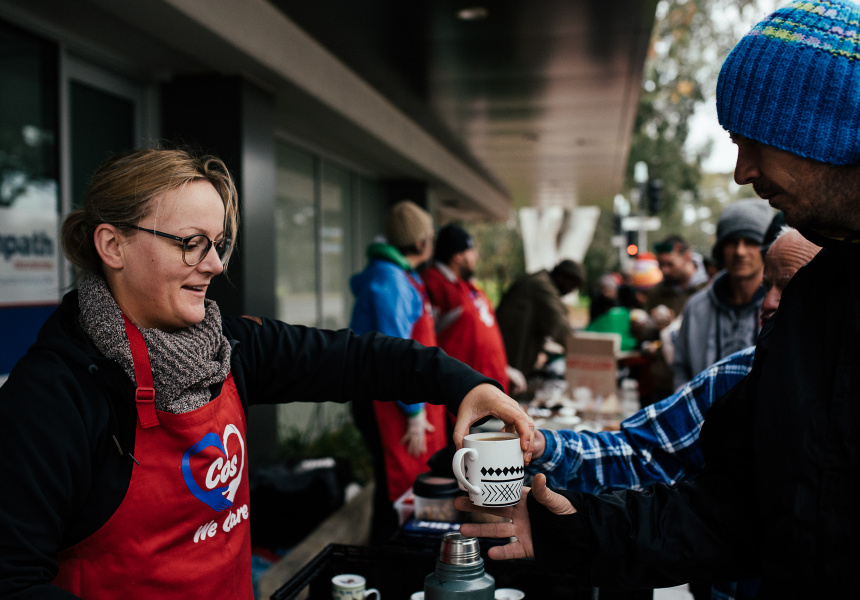 It all started with 78 bread rolls.

Ann Cooper and a friend were lending a hand to a food-parcel program for disadvantaged people in Adelaide, when they saw bags of rolls going unclaimed. So they took the rolls, broke out the jam and Vegemite, boiled some kettles, and headed into the city to distribute them by hand.

From that spontaneous DIY start three years ago, Cooper’s mission – now operating under the banner Cos We Care – was born. “We haven’t missed a Sunday since,” she says. The not-for-profit now owns a pair of refrigerated vans to distribute donations, and sets up shop at Fremont Park in the city’s north every Saturday morning, then on South Terrace in the CBD every Sunday morning. Up to 200 needy people are served each week. It doesn’t stop at food – donations handed out by Cos We Care range from blankets and clothing to shoes and toiletries.

“Everything’s donated,” says Cooper. “Nobody gets paid. It’s all volunteers.” That makes any outside assistance hugely beneficial.

One of the most essential sources of support comes from CafeSmart, an annual one-day fund-raising campaign run by StreetSmart Australia, which works to support people who are homeless or at risk in Australia. Returning again this year on August 3, CafeSmart asks cafes across Australia to donate $1 for every coffee sold to a local, grassroots organisation – like Cos We Care –that deal with issues related to homelessness. Some of this year’s participating cafes include Coffee Institute, Brick+Mortar Creative and First Order Coffee. (See this year’s participating cafes). Customers are encouraged to chip in as well.

Cos We Care can sing the schemes virtues. Using those grants, plus funds from local council and proceeds from regular barbeques at Bunnings, Cos We Care has been able to purchase large storage containers for dry goods, plus a walk-in coolroom and two roving vans to help those local community members in need.

Cos We Care’s recipients range from the perpetually homeless to those who might be struggling that week. “There was a guy [recently] I hadn’t seen for months,” says Cooper. “He said, ‘We just hit a bit of a rough patch and extra bills came in.’ There’s a lot of unemployment in [Adelaide’s] north, so people are finding that by the time they’ve paid their mortgage or rent and power, they’re struggling for food.”

That difference comes through loud and clear when Cooper cites people helped by Cos We Care, who now return the favour. Several regulars help set up and pack up each week, while another drove Cooper around in the van for food pick-ups following an ankle injury.

“One guy comes with his deck chair,” says Cooper. “He sits down and says, ‘This is my communication time. This is when I get to talk to people.’ That makes me feel like it’s all worthwhile when I’m getting out of bed at half past five in the morning to get it going.”

Cos We Care initially partnered with established resources such as Essentials for Women to gain traction, but now is able to supply most products itself. Help comes from all over: service stations donate end-of-day milk and bread, while fruit vendors and chains like Bakers Delight chip in too. Cooper recounts seeing a school girl spend her last three dollars buying three tins of beans to donate, only to “walk away saying how great that was.”

Every little bit – including your coffee – contributes. “A lot of people want to be able to donate, but they don’t know how,” says Cooper. Keep it in mind on Friday August 3 when the campaign returns. “They have just made it so simple for so many people,” she adds. “It really makes a difference.”

Cos We Care is just one of several local Adelaide organisations supported by CafeSmart, an initiative that unites the community over coffee to help fund local homelessness services. CafeSmart returns August 3. Find participating cafes here. Roasters can become partners here. Cafe owners can sign up to CafeSmart here.

Broadsheet is a proud media partner of StreetSmart.