After an unanticipated exit from their Kent Town digs, owners Sharon Mackay and Brad Bonar are sticking with the urban renewal theme, opening temporary digs in a former Beaurepaires. 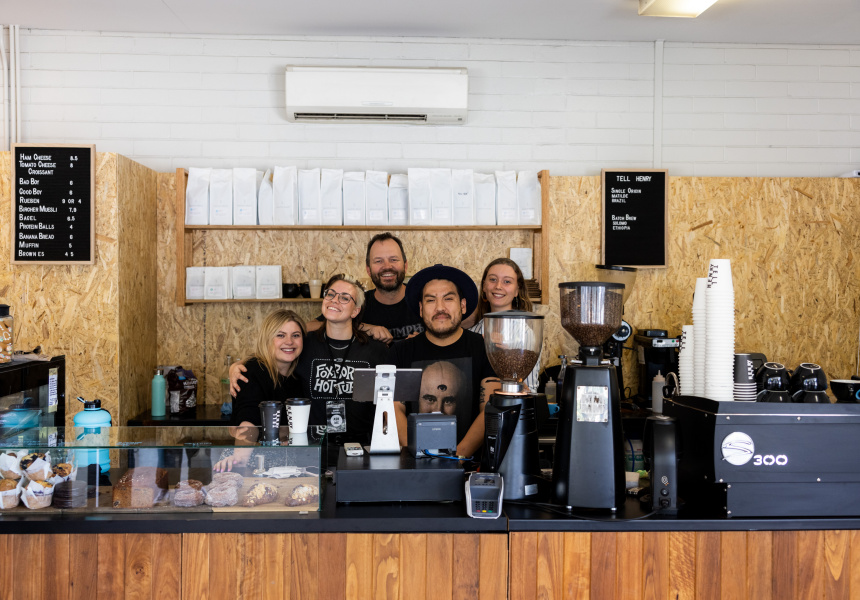 Sharon Mackay and Brad Bonar have a penchant for offbeat spaces. In 2015 they opened Tell Henry in a former mechanic’s garage in Kent Town. Now, after almost six years, they’ve moved into a temporary spot – 875 steps away, says Mackay – in a former Beaurepaires site on The Parade.

“We’ve become quite good at getting development approval for converting mechanics into cafes,” says Mackay with a smile. “Which is tricky – it’s not a standard process to go through. But council were really supportive of this move … I think they understand that this sort of place adds vibrancy to the street.”

As a landscape architect, it’s no wonder Mackay has a knack for urban design and renewal. “It’s a building that was ripe for reuse,” she says. “It’s a temporary spot, of course, but … we’ll never have this much space [again]. It’s really fun.”

In early February, the couple were given 30 days to vacate their original digs down the road. It was a blow, and one they don’t want to dwell on. Instead, they’re looking ahead. “We reluctantly moved out of there and it was really short notice,” says Mackay. “But we took a difficult situation and were lucky to be able to turn it around quickly.

“The Parade’s got such a good feeling. There’s a lot of people walking [past]. We’re still in the same area … we’re seeing all the same faces.”

Transforming the old tyre repair site into a coffee shop happened in a rapid five-day turnaround. The signature orange and blue colour scheme has been erased with a wash of white paint (apart from one pillar – “we left an homage to Beaurepaires,” says Mackay). When Broadsheet visits after opening weekend, Bonar is still peeling away painter’s tape. There’s no signage yet, and there’s still more seating, more lighting and more licks of paint to come.

“We got a fair way, and then we just opened,” says Mackay. “We thought, ‘We can come back and do the jobs we didn’t get done.’ And then we went, ‘Actually, we just need to sit down for a couple of days, and then we’ll get back into it and finish the job.’

“We just wanted to make sure our staff could keep working and that our customers had somewhere to keep meeting.”

The couple is subleasing from Beaurepaires for the next four months while they look for their “forever home”, says Mackay.

“We could not have done it without the help of our staff, who were amazing, and a large group of mates who came to help out,” says Bonar.

“We had customers lend us their moving truck,” adds Mackay. “Even leasing this space happened because of a Tell Henry supporter and customer.”

“Our builders are customers [too],” says Bonar.

The Kent Town residents hope their next site will keep Tell Henry in the inner east. “We’re looking,” says Mackay. “It’s not easy because we’re looking for something that has an exceptional feel about it, and they don’t come up very often … but we know what we want. We just have to be patient and wait for the right home.”

In the meantime, you can expect “exactly the same Tell Henry” experience on The Parade, with the same open and relaxed vibe, the same expert coffee from Melbourne’s Industry Beans, and the same tight menu of grab-and-go items, including the crowd-favourite Bad Boy (a petite bacon-and-egg roll) and its offsider, the Good Boy (a vegan version with falafel and hummus). “We get a lot of customers ordering one of each,” says Mackay.

One former garage is now home to a breakout space that’ll double as a meeting room for hire (complete with a converted table-tennis table to sit at). “What we found in Kent Town was there are so many small creative industries that might not have corporate offices, so they might only have one meeting room or not be setup for that type of [meeting],” says Mackay. “It’s a great way to support those local businesses, to have that available to them. There’s a lot of parenting groups, too.”

“We want to do what we did in Kent Town, which was more than just a building, right? We’re trying to provide a place,” Mackay continues. “I’ve already introduced a few people to each other today. It’s a place where people come and see their friends, and everyone knows each other’s name and their dog’s name. It’s about coffee, but it’s more about community.” 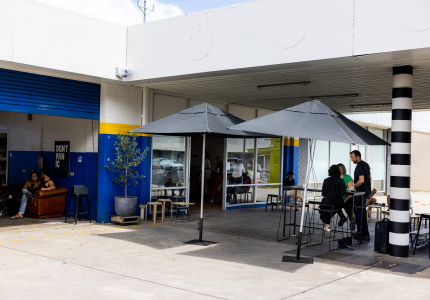