Under the management of Hugo Pedler, the Henley Beach icon has been reborn as a slick seaside destination. Expect soft-shell crab sliders, kingfish sashimi and Pina Coladas. A new deck, an ice-cream cart and guest DJs are on the way, too. 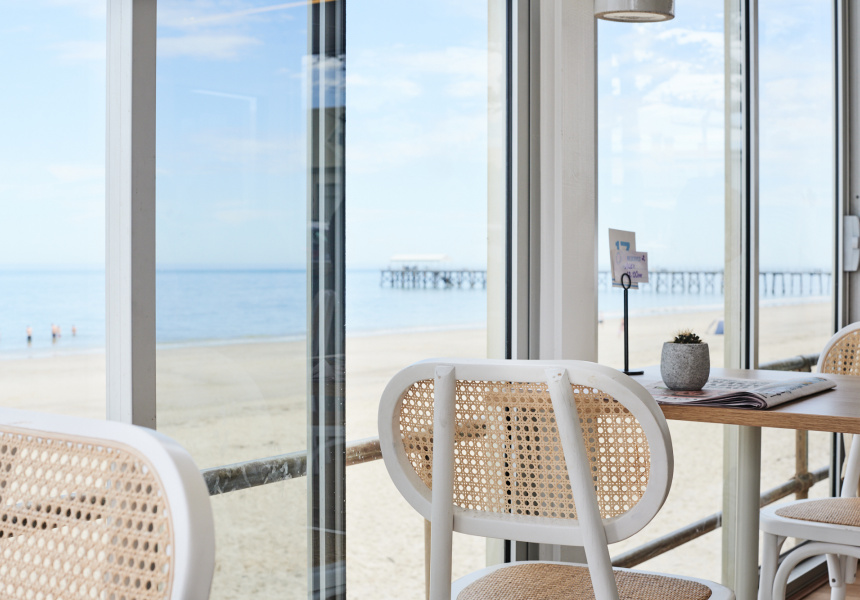 Striped beach umbrellas, a pastel-blue espresso machine and the smell of salt in the air: Joe’s Kiosk screams “seaside” louder than the waves crashing just metres away. A fixture of the Henley Beach foreshore for 25 years, the kiosk was purchased two years ago by Cibo Espresso founder Roberto Cardone and business partner Mark Balnaves. Hugo Pedler (West Oak Hotel, Lion Arts Factory) came on board as co-owner and manager in March.

“I’d been pestering Rob to get me involved in the project. Me and my family have been going there every weekend for two years,” Pedler tells Broadsheet.

Under his oversight, the site has undergone a complete redevelopment by builder Sam Weckert (who’s working with Studio-Gram on Anchovy Bandit’s new deli) and fit-out-specialists Remington Matters. There’s new furniture, a new floor, new concrete countertops, fresh blue tiles and a re-jigged service area. “It’s a dash of Noosa, a dash of the Hamptons, and a big dash of Kiosk,” says Pedler.

His aim is to keep the soul of the venue intact. “It’s a kiosk – that’s what it is at its heart. We’re not going in and trying to change everything about it,” he says. “We’re just matching the venue to the view.” His ambitions are clear – to attract a younger, trendier crowd and position the kiosk as a destination rather than a casual layover.

As part of this mission, Pedler’s enlisted chef Krish Dutt, who previously cooked for Jordan’s royal family and is now on the pans at West Oak Hotel.

Dutt’s expanded all-day menu is fit for purpose. There’s the Spider Slider (a soft-shell crab brioche burger with sriracha mayo); eggs Benedict; a brekky bun with chorizo; French toast; and other cafe staples. As the sun sets, the bar mixes Passionfruit Mojitos and Pina Coladas. Trays of nibbles – such as kingfish sashimi and salt-and-pepper squid – roll out from the kitchen.

And of course there’s fish’n’chips, made with locally caught fish. “Ninety-nine percent of everything we use is South Australian,” says Dutt. “Our oysters are all coming from Port Lincoln. Fresh kingfish gets delivered every Friday and we prep it up for the weekend.”

The changes are proving popular. Most weekends, the food sells out by 2pm. “We’re about to get an ice-cream and coffee cart for outside because we can’t keep up,” Pedler says. He's also extended the kiosk’s trading hours from sunrise to sunset. “As sunset gets later, we’ll trade later,” he says. The venue has also resumed daily trading, the team is working with council to build a new deck, and there’s a plan to host DJs once a month.