Take Refuge From 2020 on Refreshment Island

Fill your cup at a new series of food and wine parties on the Murlawirrapurka/Rymill Park island this summer. 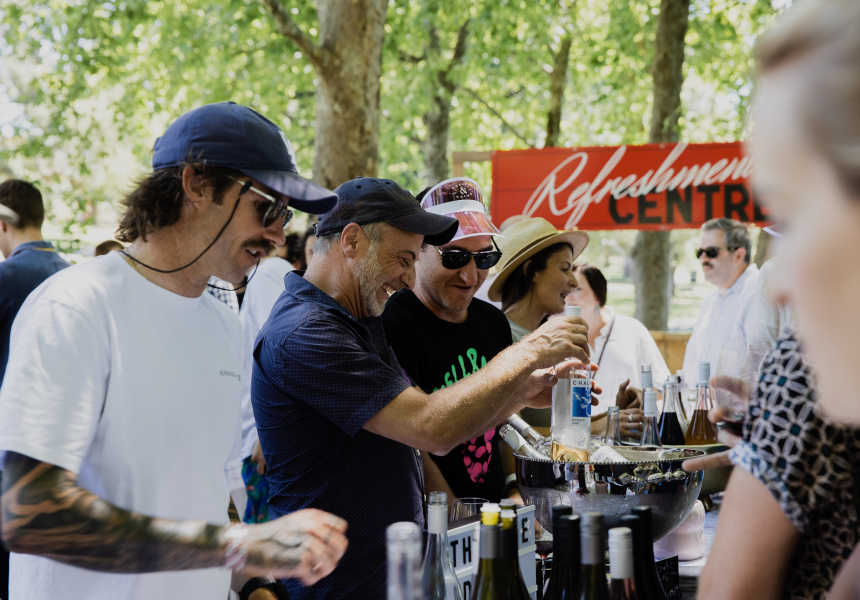 As one of Australia’s foremost wine critics, Nick Stock would usually be spending his year flying between wine regions around the globe. But when you-know-what grounded him in Adelaide, he got to work planning a series of wine events in his hometown.

He’s teamed up with one of Adelaide’s favourite party planners, Mark Kamleh, to launch Wine Country, a new events company that wants to remove the barriers to the wine world.

“We want to be a conduit for the regions to come to the city and be celebrated … and we want to take people who live in the city out to the regions,” says Stock, who’s also the beverage director at Tasting Australia.

“It’s a pretty ballsy idea to start an event and touring company in the middle of a pandemic. But it’s what we know how to do. We figure … it’s never going to be tested like it’s tested at the moment. It’s the best proving ground.”

The two have wanted to work together for several years, and Covid provided the perfect impetus. It was a “hard reset”, says Stock.

“We tipped all our skills and experiences into a heap on the table and said, ‘What does that look like?’”

The result is “an offering I don’t think anyone in Australia has done before”, he says. “We’ll sit down with you and go, ‘What do you want to do?’ and we’ll custom design it.

“We’re like the wedding planners of wine touring,” he says laughing.”

The experiences include transfers and lunch by Adelaide’s top chefs – but the idea is that they’re totally malleable.

The pair are keen to host any kind of event, from Friday office drinks and private customised wine tours to large-scale ticketed tasting parties. The latter includes a five-date “wine extravaganza” that’ll take place on the Murlawirrapurka/Rymill Park island this summer.

They’ve named it Refreshment Island to avoid being boxed into a wine-only event, says Stock. “The more we started doing it the more we realised it was wine – and, and, and ...

“It’s not a wine event – it’s an event with 30 great producers and tons of great wine. But whoever you are, whatever you feel like you’ll be able to get it there … Whatever flavours you like or taste you have, it’s gonna be there.

“We want to expand the realm of possibilities – when people think about coming to an event they can expect there to be a lot of different aspects to it.

“Johnny from Abbots and Kinney is doing a one-off doughnut for each event. And you can only order it through Eventbrite. And Kris Lloyd [of Woodside Cheese Wrights] is making us a Wine Country cheese.”

The first event is on December 5 (from 1pm till 6pm) and will – appropriately – focus on wines from islands (including Sicily, Sardenia, Majorca and Australia). A ticket will get you access to the island and a two-hour opportunity to taste wines and chat to the local winemakers backed by music from DJ Fantastic Black Plastic. There’ll also be food by Africola and Golden Boy, who will set up in the kiosk on the riverbank.

Each edition of Refreshment Island will centre around a different theme. The next, on December 19, will focus on fizz. The following one on January 9 will be dedicated to pink wine, and the last one, on January 23, will feature the "greatest hits".

“The island event is a ticketed thing … the kiosk is where the food happens but anybody can rock down [for that]. Families can rock down, go to the kiosk and sit in the park. Hopefully a lot of people will come to our event as well, but it’s a bigger play for us. We’re a part of the city, we want to contribute to the general life of the city.

“We want the island [to feel like] it’s our go-to holiday spot for a couple of months over summer.”

Tickets to the final event are available online.