Supermild: Where is it Now? 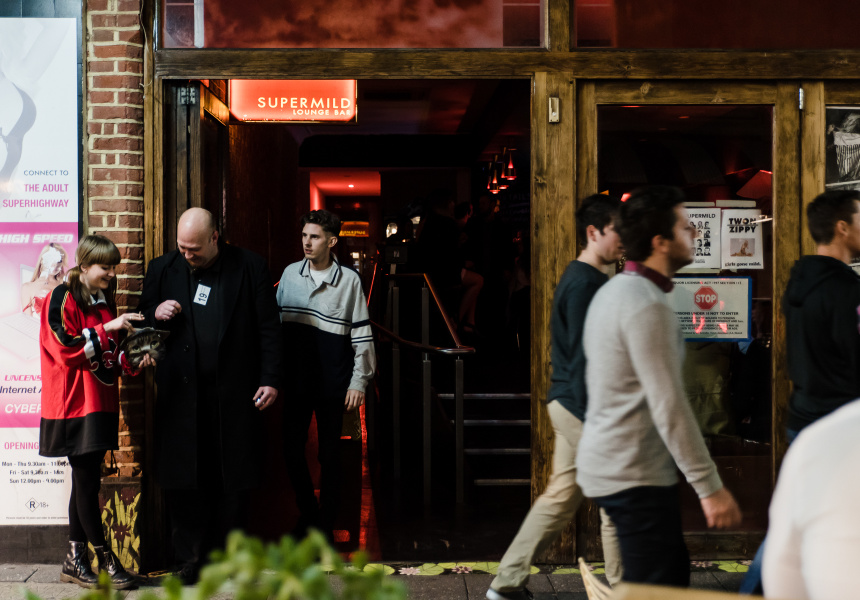 After an unwelcome departure from its home in Hindley Street’s west, beloved late-night spot Supermild has been re-born a little further east. The new digs at 73A sit in a lively part of the street, shielded from the muffled hum of crowds by four glass doors.

The new venue is peppered with pieces of the old place; the booths, lamps and fur wall remain intact. “The old booths fit in the new room with about two centimetres of space left, it’s like it was meant to be,” owner Sam Lisy says with a smile. “It’s like when mum and dad move house; all the stuff’s the same, just in a different place. And it’s still home.”

Bar manager Matt Baker, who has stuck by Lisy every step of the way, agrees. “I do feel the vibe is the same as the old place.” After all, the regulars are the scaffolding of the Supermild community.

“In the months we were closed I felt such an overwhelming amount of love,” Lisy says. “I had people messaging me who I’ve never met, offering to help any way they could.” There’s an emotional shake to her voice. “And Matt has put so much in to it, financially and mentally. He’s really like my life partner, but without the funny stuff!”

Venture downstairs to the lower level and be struck by memories of the Supermild of the past. Red light bulbs illuminate the room just enough to reveal a dance floor in the centre and accompanying DJ booth. There is simple seating along the edge of the wall and a booth in the corner. The crowd-favourite corner shelf that housed oddities such as a dolls head is still there.

“It’s kept very true to the look and feel; it’s like the same but different,” patron Jamie Schiacca says. He and friends Chelsea Zerna and Jess Lewis have been regulars at the nightspot for 10 years. “When we started going to Supers it was hard to find a place that was fun, relaxed and accepting,” Zerna says. “I want to go somewhere and have an intellectual conversation with someone but also not feel judged when I bust a move on the dance floor."

The pull for Schiacca and many others has always been the music. “On Thursdays they would play fun British tunes, Friday disco and Saturday dance music, which hasn’t changed.” The brief closure affected the friends so much they suddenly found themselves at home on weekends. “We just didn’t go out when it was shut,” laughs Lewis, “It’s like home here.”

“It’s really about the people,” Shiacca adds. “You come to hang out with everyone and see familiar faces and they’re all still here, just like the fur wall.”

The main difference for the new location is the liquor licensing, which is holding back Supermild’s signature late-night opening hours. At the moment the space must close at 2am, which is disheartening for Lisy and Baker. “It really only starts to get busy around midnight, then as soon as the place comes to life we have to start shooing people out,” Lisy says. “The worst part is it’s not even the council holding us back. It’s a private contractor who wants to change the building code, before allowing us to change the license.” It’s what has hurt the nightspot most financially.

Thankfully though, some progress has been made. Lisy is currently in talks to extend the bar’s opening hours to 5am. “It’s painful closing and not being able to take in extra funds to pay invoices or fix stuff,” she says. Financial pressure has also stalled plans for the upstairs beer garden, but Lisy promises work will begin once the licence extension comes into effect.

With Lisy and Baker’s fierce desire to push forward, Supermild is in safe hands. The furniture, lights and crowd are still all there, but maybe it’s not the stuff that makes it feel like home; maybe it’s the parents.