Alongside South Australia’s experimental wine industry is a budding local gin trade. We speak with the distillers putting SA gin on the map. 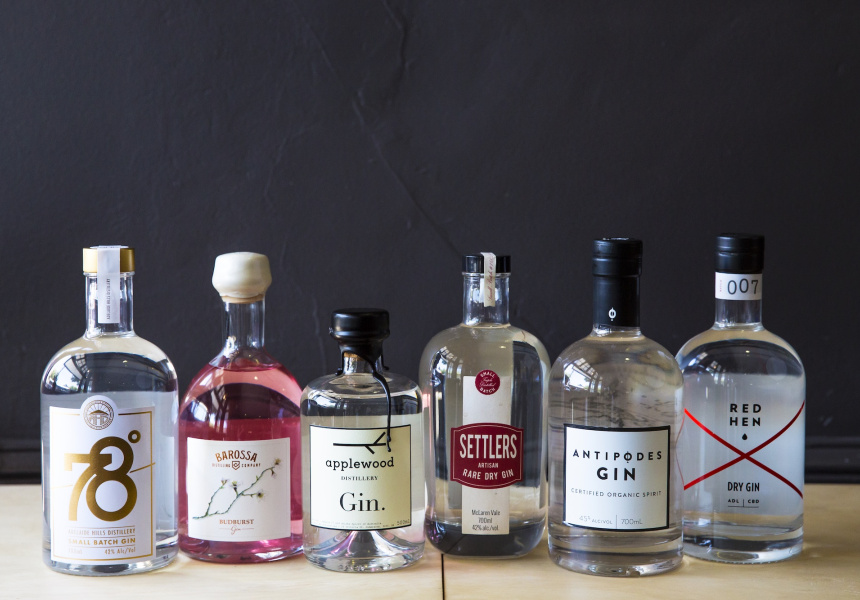 When Mick Krieg opened The Howling Owl in 2012, he stocked about 40 different varieties of gin. But there was only one local name on the menu. When it opened in 2006, Kangaroo Island Spirits was Australia’s first dedicated gin distillery, and for eight years it was the only one in South Australia.

A trip to the KI Spirits cellar door had been the inspiration for his gin-focussed bar, but Krieg never imagined demand for the spirit would grow as quickly as it has. Five years ago, he struggled to find stock of interesting products from overseas, and Australian options were few. That’s all changed. So many craft distilleries are launching that it’s a challenge to keep track of them. In the past six months alone, we’ve seen Fleurieu Distillery, Red Hen Gin and 23rd Street Distillery open.

The Howling Owl, which will soon be moving to larger premises, now stocks more than 20 local gins. According to manager Alana Hockley there’s room (and demand) for many more. “Once we have a new venue we’re ‘gonna go crazy.”

Perhaps the most visually distinctive is Barossa Distilling Company’s Budburst. The startling pink colour comes from native currants that are macerated in the spirit. In a nod to the Barossa Valley’s winemaking heritage, the resulting liquid is diluted down to bottling strength using white frontignac (muscat).

Managing director Neil Bullock believes this willingness to experiment is one of the keys to the success of local gin producers.

It’s a theory echoed by others in the industry, and it’s no coincidence many come from a winemaking background. For winemakers, each vintage is another test, a chance to experiment with new flavours and techniques. The search for the perfect blend is never-ending and many vintners have turned to new techniques and little-known varietals in this quixotic pursuit.

With few rules governing its production beyond the use of juniper berries and a minimum alcohol content, gin offers even greater scope for experimentation. It’s certainly one of the drawcards for Rowland Short of Settlers Spirits, who also runs Maximus Wines. “As a gin maker, the very exciting thing is that what you do is only limited by your imagination.”

One key tool in his arsenal is the use of native botanicals such as muntries and saltbush from the Coorong. Not all Australian distilleries use indigenous plants, but the vast majority do and it’s one of the things that sets them apart internationally. One couldn’t exactly call it terroir – these ingredients come from geographically disparate areas – but whatever it is certainly imparts a uniquely Australian character to the gin.

As is often the case in the gin world, KI Spirits led the way on this front, using ingredients such as the Kangaroo Island coastal daisy bush and native juniper. Now it’s common to find botanicals like lemon myrtle, finger lime, Tasmanian pepper berry and even macadamia nuts in South Australian gins.

The wide range of expression these flavours provide has been a gift for craft distillers, but as Rowland Short says, it’s always important to keep sight of the main reason for making gin. “It has to be refreshing. That’s why we drink gin, why we drink anything. And a lot of gins, especially of the local small-batch variety, are very refreshing.”

The Howling Owl is located at 13 Frome Street, Adelaide until the end of the Fringe Festival, when it will move to 10 Vaughan Place, Adelaide.