A brewery and taphouse from three south-coast natives. 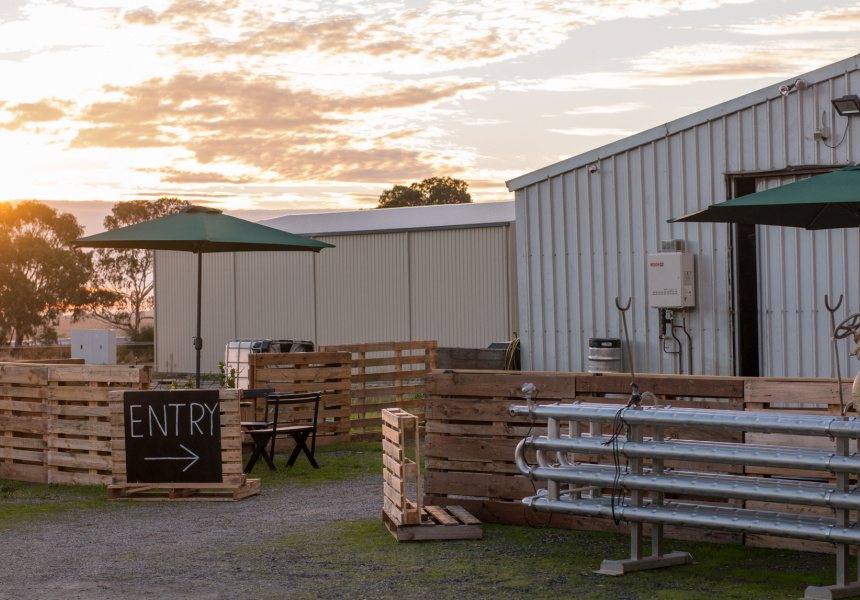 “Our red ale’s called ‘Maslin’s’ after Maslin [nude] Beach,” says Scott Zrna, head brewer at South Coast Brewing Co. “Make sure you take your sunscreen,” he adds. “’Cause the only thing you want to be red at Maslin’s is the beer!”

This quick-witted brewer is no stranger to the booze-making business. But for the past 25 years it’s been wine, not beer (most recently at McLaren Vale’s Fox Creek Wines, where he still works part-time). He got into all-grain home-brewing a few years ago.

On a ski trip with long-time mate Mark Sorrell, an engineer looking to escape the corporate life, “We had a silly idea that maybe we should start a brewery,” Zrna says. They enlisted another mate, Brett Doonan, who’s (conveniently) an alcohol sales rep.

Less than two years on, it’s no longer just a wishful pub conversation. You can find the trio’s new brewery in a converted shed nicely tucked away in one of Willunga’s industrial pockets.

All three guys have roots on the south coast – hence the name. In the brewery’s adjoining taphouse, an approachable bunch of core beers are on-pour: the sessionable “Southern” pale ale; a more-traditional pale ale, named “Porties” after Port Noarlunga; and Zrna’s cheeky “Maslin’s” red ale.

He’s also got a small-batch chocolate porter bubbling away and there’s a stout, IPA and winter bock (a strong German lager) to come. Lighter styles such as saisons and wheat beers will sub in over summer.

It’s a relatively small operation. “We’re not out to take over the world ... yet,” says Zrna, with a smirk. What you see behind the bar – the kettle and a few tanks – is the extent of it.

For now it’s about quality control. “Everything comes out of the shed; we don’t outsource anything,” he says. “That gives us total control over the whole process.” And room for experimentation: “We can do one single keg and see what it comes out like.”

The indoor-outdoor taphouse is a no-frills affair. “It reflects the kind of people we are: chilled. We enjoy a good beer and we built somewhere we’d actually like to sit and have one,” says Zrna.

The DIY fit-out took some expert scouring of auctions and Gumtree, and a lot of elbow grease. There’s furniture made from repurposed pallets, a set of worn-in red chesterfield couches and a crackling open fireplace. Catch a glimpse of the ocean from the beer garden.

Hand-bottled brews – perhaps best enjoyed on the stretch of coastline the brewery’s named after – will soon be available to go. But bottling by hand is an arduous process. The guys have launched a Pozible campaign to help bankroll a bottling line.

South Coast Brewing Co will be pouring at Adelaide Beer & BBQ Festival from July 6 to 8.