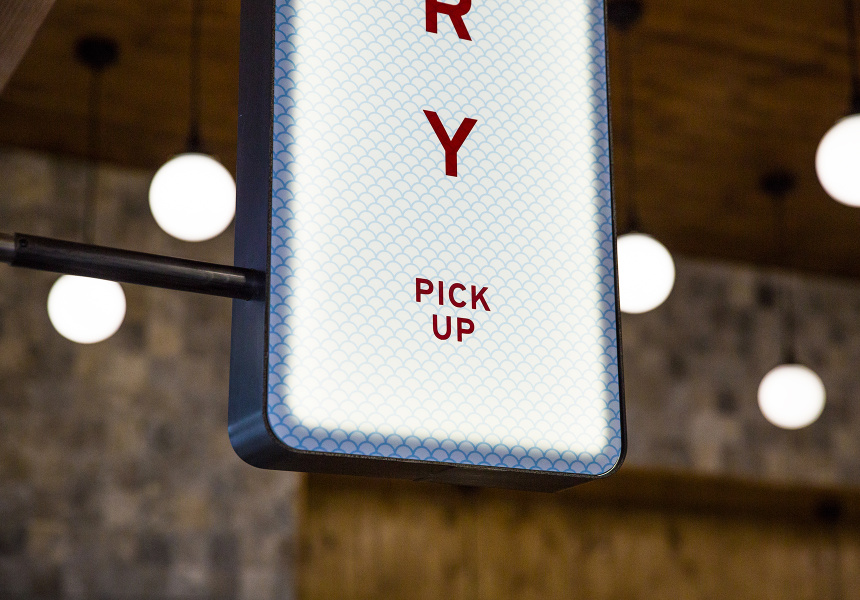 Smallfry Seafood is the local fish ‘n’ chip shop you loved as a kid, scrubbed up a bit. Gone are the soggy, sad newspaper-cocoons dripping with grease. This CBD newcomer feels more like a tapas or yakitori bar than a corner takeaway, and it’s serving fresh, simple seafood.

The Japanese dining influence runs through the venue – from Asahi on tap to the bottles of mirin, soy and Kewpie mayonnaise behind the bar, and the noren (a traditional Japanese door curtain) displaying the kenji letters for “seafood”. A traditional Aussie curtain (made from strips of transparent PVC) hangs in the entrance, for a touch of bogan-chic.

Japanese philosophy guides the menu, too. “They’re serious with their seafood,” says owner Jack Lim, who works the grill alongside business partner Nick Wang. “We wanted to be reminded of that mentality – to treat seafood that way.” Ingredients are delivered daily and handled delicately. “With fresh seafood, you really don’t do too much,” Lim says.

He looks for quality as well as freshness. He serves Coffin Bay oysters and Port Lincoln kingfish, but prefers scallops from Japan because they’re bigger than those farmed here.

Lim and Wang met studying accounting at university but traded their calculators and pocket protectors for a deep fryer and messy aprons shortly after graduation. The pair’s first venture was the shiny chrome food van, Papa’s Gourmet Hotdogs, which they operated together until 2014. The menu at Smallfry includes a throwback to the pair’s dawg-slinging days, in the form of a lobster roll that’s Lim’s favourite dish. “It’s perfect for something light,” he says.

The menu is familiar, but Lim and Wang have added their own twists and tweaks – such as the pickled-ginger coleslaw accompanying the karaage chicken burger. It’s cleaner and less creamy than expected, with good bite. There’s Long Island chowder, NYC Lobster with herb butter, sashimi, burgers and battered or grilled fish – served with chips or rice. The chefs have spent the past few weeks perfecting their (secret) batter recipe and finessing the homemade dipping sauces.

Aesthetically the bar is more urban than it is beachside. And there’s not a Chikko Roll poster in sight. “We wanted to create something warm,” Lim says. Sans-Arc’s Matiya Marović toned down the familiar blue and stainless steel combination of suburban fish ‘n’ chip shops, introducing timber cladding and oyster-shell tiles for a sense of the contemporary. The booth and central tables are fashioned from cool grey-blue cement, speckled with glass fragments. FRAME Creative delivered the graphics and branding.

Smallfry Seafood aims to entice lunchtime and after-work crowds. Situated on the strip of Waymouth Street near Thrift Shop, The Gallery and Proof, it’s well positioned for both.