There’s a long-awaited fine diner by Callum Hann, “untraditional” Mexican in a suburban brewery and new chapters for two of Adelaide’s best. Plus, permanent homes for two festival favourites. 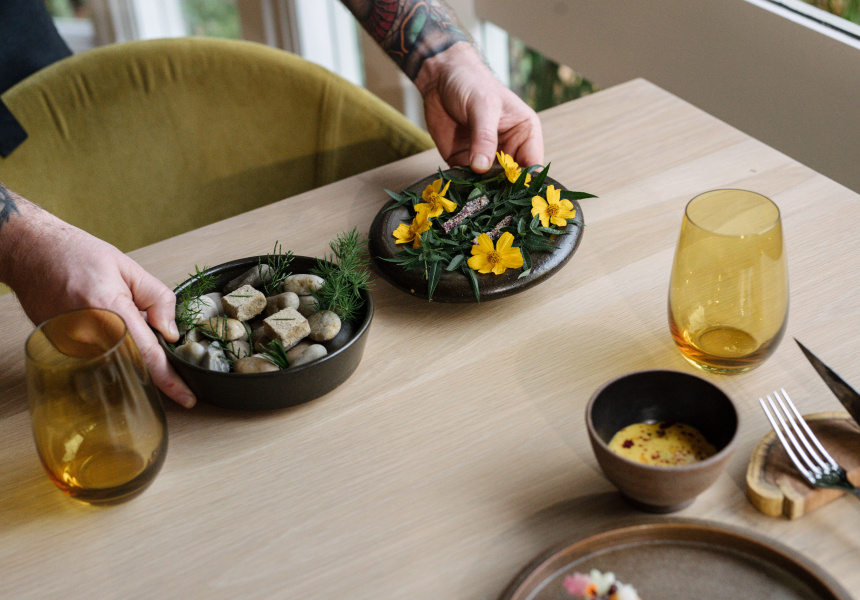 Under chef Paul Baker, Botanic Gardens Restaurant was one of Adelaide’s best dining experiences. But the dated interior of the former tearoom was out of step with the gorgeous grounds it calls home and the aspiring food on the plate. With the appointment of new executive chef Justin James (ex-Vue de Monde) earlier this year, the fine diner has embarked on a new chapter.

After an extensive renovation designed by WBL, the renamed Restaurant Botanic has a new open kitchen and hearth, a 12-seat chef's table and a freshened-up dining room. The open fire touches every dish in some way, from a smoked celeriac and apple tea that opens proceedings, to a closer of smoked milk sorbet with native basil.

Guests can choose from two menus – the short path or the long trail – which might feature marron with fermented chilli and lemon myrtle from the garden; locally grown mushrooms with a 30-day fermented vegetable paste; dry-aged Murray cod served with fermented and fresh truffles and a koji- and anise-myrtle sauce; and duck-fat scones with 30-day-cultured butter and “clam jam”.

Another addition is a new “temperance menu” – a selection of non-alcoholic drinks including kombucha, infused juices, garden blend teas, mocktails and more. If it’s booze you’re after, there’s an extensive list of new- and old-world wines, plus cocktails including a koji Old-Fashioned, wattleseed Espresso Martini and a Chef’s Negroni with mezcal, whisky and Campari.

After months of anticipation, extended delays and a snap lockdown, Soi 38 finally swung open the door at Pirie Street in June. Despite the new site there’s a strong sense of familiarity. The long, narrow room running alongside a laneway mirrors the Pulteney Street original. The staff is the same friendly, at-ease team. And chef Terry Intarakhamhaeng’s killer regional Thai cooking remains. But there’s a new level of sophistication and maturity that’s come from years of steady evolution.

The former Subway, on the corner of Pirie Street and Coromandel Place, has been transformed by architect firm Walter Brooke into a warm, inviting space enhanced by a striking barrel vault ceiling flanked by curtains inspired by Thai prayer flags. (Before his cheffing days Intarakhamhaeng was a Buddhist monk). A new open kitchen lets guests sit ringside and peer into the fire-fuelled theatre of Intarakhamhaeng and head chef Pui Kannika.

The food delves deeper into the regional cuisines of southern and western Thailand (and the country’s ethnic minority groups). There’s also a new grilled section, which draws from northern and north-eastern Thailand. The menu makes use of game meats such as venison (grilled and served with nam jim and tomato paste) and wild buffalo (served as tartare), plus native produce such as kangaroo tail (in a Penang red curry), marron (served with pork belly and vermicelli) and pipis (with chilli crab oil).

Another highlight is the spicy Chiang Mai-inspired chicken hotdog. “In northern Thailand, there are the massive, curled, spiced sausages (sai ua), which are made with lemongrass, kaffir lime, ginger and curry paste, and they’re served as a whole curl of the sausages by the kilo; they don’t sell it by the piece,” says owner-chef Terry Intarakhamhaeng. “So we adapted this by working with the producer (Nomad Farms) to create sausages that were the size we want, which are usually about 150 to 200 grams, then we put them in a hot dog bun with pickled slaw.”

Some classic Soi 38 dishes remain – you can still order green or massaman curries. The restaurant’s interior isn’t dramatically different from what it was when it was Soi 38, either, with designer Dave Lawson (from Design People) choosing to retain its pastel colour palette. New to the space are stickers playing on the fire theme, and matchbox-style lightboxes inspired by street signage in Thailand.

When Alex Marschall, Joshua Talbot, Matthew Orman and Oliver Brown wanted to open a brewery six years ago, they lacked the start-up capital to purchase the brewing equipment. So they opened craft beer bar Nola instead. But all the while their original concept was still brewing (figuratively) in the background. Bowden Brewing finally opened in July – at Plant 3 – bringing on board another business partner, Jake Phoenix.

The 14-tap bar pours a range of beer styles, including their core four: an approachable easy-drinking Bowden Draught; a hoppier, fruit-driven session ale; a big, bold, bitter West Coast IPA; and a fruit sour that’ll change with the seasons. The drinks are backed by food from executive chef Harry Bourne, who’s designed a menu of “untraditional” Mexican- and Central American-inspired cooking under a separate identity, Masa (named after the maize dough used for tortillas). Naturally, there’s a selection of tacos and tostadas – house-made corn tortillas topped with blood sausage with pickled red onion, say, or battered Port Lincoln flathead with green salsa.

You might also get barbequed Nomad Farms chicken and charred Ngeringa cauliflower off the wood-fired grill, plus snacks such as fried school prawns with popcorn and garlic mayo; pig’s head croquettes with refried beans; and chargrilled corn with black garlic butter and pecorino. The kitchen’s also introduced takeaway DIY taco kits.

Most chef’s tables have eight, 10 or even 12 settings. But the best seats in the house at Themis Chryssidis and Callum Hann’s latest venture are the 11 spots looking into the large open kitchen. Located inside a courtyard at 11 Waymouth Street, the restaurant is also called Eleven but, “I think our obsession with the number 11 stops about there,” laughs Hann. Together, the pair run Sprout Cooking School, Lou’s Place at Lou Miranda Estate and an open-air cafe and bar (also called Eleven) just outside the new restaurant.

And despite the name, the most important numbers are 13 and 17. That’s the number of dishes that hit the table for Eleven’s two degustations. Both start with a caramelised onion milk bun, chicken fat butter and chicken skin salt made from Nature’s Chicken’s robust, apple-fed chooks. The bread even has its own beverage pairing, a 2017 sauternes from premier cru Chateau Rieussec. Somm Geoffrey Hunt’s wine list includes an impressive selection of French options from champagne to chablis alongside more parochial South Australian matches.

After several years on the move as pop-up and roving vendors, Adelaide Wine Markets duo Dale Wostikow and Josh Voigt and Caroclub’s Tim Attiwill, Kyle McLean and Kain Slotegraaf are finally staying put. Together the two teams have launched a permanent bottle shop, eatery and wine bar – Bowden Cellars – in the new Plant 3 development. The design by Echelon Studio draws on the precinct’s industrial architecture with polished concrete floors and a lofty, open-plan space.

While Voigt and Wostikow focus on the drinks, they’ve enlisted Caro Club to run the kitchen. The popular food truck was founded in 2017 by Attiwill and McLean (who both appeared in season eight of My Kitchen Rules) and their long-time friend (and head chef) Slotegraaf, who's done time at Shobosho, Bread & Bone and Orana, as well as a stint with Noma in Denmark and Mexico in 2014.

He’s assembled a tight menu of American-style burgers and fried chicken backed by house-made sauces, charred corn slaw and an Oreo cheesecake. New to the Caro Club menu is a crisp fried shimeji mushroom burger with all the trimmings and a spicy Memphis barbeque sauce and fiery versions of their fried chicken burger and cheeseburger with peri peri sauce.