A Single-Dish Restaurant, Serving Only Hainanese Chicken Rice, Is Coming to Waymouth Street

Out with Smallfry Seafood, in with a sure-fire Asian classic. Grab a lobster roll while you still can. Waymouth Street’s scrubbed-up, Japanese-inspired fish and chipper – Smallfry Seafood – is closing on November 2.

After a two-week renovation owners Jack Lim and Nick Wang will relaunch the site as a single-dish restaurant, Uncle, serving only Hainanese chicken rice. It will lean on a recipe handed down from Lim’s late uncle, who was a popular hawker in Penang. “Before my uncle passed away he always wanted me to do this – carry on his legacy in Adelaide,” Lim tells Broadsheet.

It isn’t that the pair can no longer maintain Smallfry, he says. “And we don’t want to blame anything like the [Waymouth Street] roadworks or the council.”

Smallfry’s seafood-dominant, cooked-to-order menu works at dinner but has struggled to stick with the strip’s mainly corporate lunchtime crowd. “People tend to want a quick lunch,” says Lim, “and it’s quite hard to carry out at speed.” Chicken rice flows better from day to night and can be churned out at lightning-fast pace.

He also sees chicken rice as a more sustainable food concept that “better shows our [Malaysian] heritage”. “The mission statement of this is stronger than continuing Smallfry,” he says.

Despite the “single-dish” billing there’ll still be a few choices to make: top the rice with either traditional slow-poached or roasted chicken. Add clear chicken or laksa broth, or a side of Asian greens.

Sans-Arc Studio’s blue-hued design earned Smallfry a spot on the shortlist for Best Restaurant Design at the 2017 Eat Drink Design Awards. Aside from new branding, “There won’t be a lot of changes [to the fit-out],” Lim says. “The current design is too nice to pull apart.”

Smallfry Seafood closes on November 2. It will relaunch after a two-week renovation. 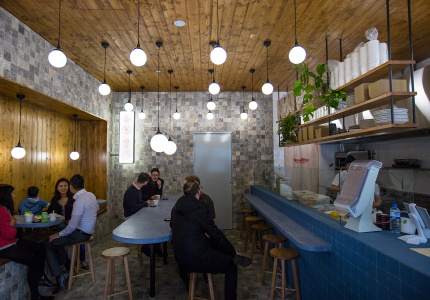