We chat to graphic designer and master pickler Robbie Mather to kick off our Side Hustle series about balancing life, family and passion projects. Robbie Mather was at home in Adelaide, face-timing his wife Lucy in New York, when he dreamed up his side hustle, Nice Pickles.

“[Lucy] was in New York for work,” says Mather. “She was in a pickle place and … eating all these pickles – pickled celery and pineapple and cool stuff. I got talking to the guys in the shop … and I was asking how they do it.”

It was a light-bulb moment for the video game developer turned graphic designer. “I was like, ‘That’s what I want to do’,” he says.

By day, Mather is the graphic designer at State Theatre Company. But he’s got a serious passion for food and cookery. “I wanted to design something of my own from scratch,” he says. He combined the two worlds last year for a collaboration beer between State Theatre and Little Bang Brewing. Mather had worked with Little Bang brewers Ryan Davidson and Filip Kemp when he was a video game developer.

When the Australian video game industry collapsed leaving scores of tech workers out of a job, Mather, like Davidson and Kemp, had to find new work.

He moved to Amsterdam for a year and worked as a web designer before returning to Australia to develop apps. “I’d been working from screens and I really needed a release from that, to try and push my creativity into something else,” he says.

Mather found his outlet in food, a visceral kind of creativity that became a welcome relief from the nine-to-five office grind. He visited Japan and experimented with miso before landing on pickling, including, most notably, his signature Jerk beans. “The vegetables are the vessel for everything else you put in the jar,” he says. “They’re like the carrier for really interesting flavours.”

The sweet and spicy green beans are prepped, washed, and packed into sterilised jars before being doused in boiling-hot brine – apple cider vinegar, white vinegar, habanero, all-spice, pepper, garlic and sugar. Last year he collaborated with indigenous produce specialist Something Wild on kimchi made with native karkalla.

“When I started getting to a point where I could sell in shops, I had to hire kitchens. I was struggling to find a kitchen I could use consistently,” he says. Earlier this year a kitchen became available in the basement of the Lion Arts Centre. It had been right under his nose – directly beneath the State Theatre office, were he’s worked for six years.

“I saw that Renew Adelaide had the kitchen available, so I went downstairs and had a look,” he says. There he found Sunny’s Pizza chef Andy Nowell looking at the space too. “I only needed it a few days a week [and] we had good synergy.”

The pair pitched a joint lease, where they’d work collaboratively on products and potentially sell them from the courtyard. They cleaned the place up, gave it a fresh lick of paint, and moved in last month.

Nice Pickles’ products are available in-store and on the menu at Africola, Lucia’s, Goodwood Cellars and more. They’re also available at 1888 Certified in Sydney and MoVida in Melbourne.

Mather is currently working on seasonal pickle-related products, including an exciting new beverage. It’s under wraps for now, but will be entered into the Drink Easy Awards, which is presented by Broadsheet.

Managing a side hustle like Nice Pickles takes planning – especially with competing demands of work and family. “It works, but it’s hard,” he says. “It is really difficult, but the importance of doing something that you love outweighs the difficulties.”

He sometimes ends up working in the evenings and on weekends, although his children – Kitty, six and Lewis, 11 – are always first priority. “It’s a privilege being able to teach my kids that through hard work they can create their own products,” he says.

Naturally, it requires being organised. “Google calendar is great,” he says. “And a tolerant wife is great.” Mather’s wife, Lucy Guster, works at the State Library of South Australia, and takes care of the Nice Pickles bookkeeping. Mather designs the labels, website and all marketing material himself.

“I’ve never gotten into it thinking that I’d make money,” he says. “It’s amazing to see it grow, and I’m just rolling with that at the moment. I never anticipated that it would actually get this far.”

He urges anybody considering a passion project to go for it. “Do it. Do it quickly. Make sure it’s something you love,” he says. “Identify a gap in the market, follow it through with something you love, and it’ll build itself – if you’re lucky.” 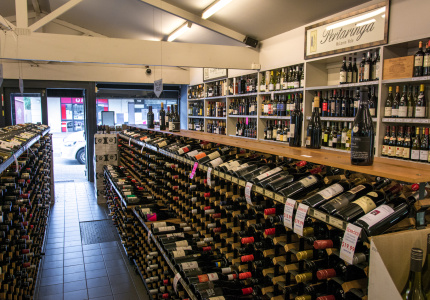