A New App for Adelaide Diners

The Adelaide-born start-up aims to build a more cohesive relationship between customers and venues. 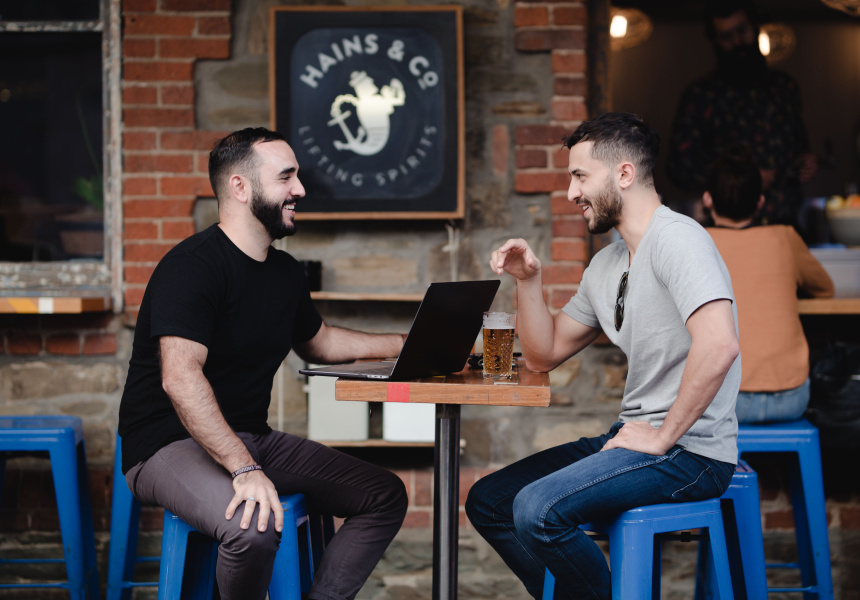 Mitchell Stapleton-Coory isn’t a fan of the current climate of promotions platforms.

As co-founder of Shoutback, he and long-time friend Matthew Giorgio are hoping their new app will give diners, and the bars, pubs and restaurants they go to, a more intuitive, cohesive and autonomous experience.

“It’s not some shitty groupon thing you bought and forgot about months ago that you’re trying to claim in a venue where the staff don’t even know about it,” he tells Broadsheet. “It’s relevant, fresh and engaging.”

The Adelaide start-up will connect customers to venues with deals or promotions to spruik.

“Whenever you open up the app you will be immediately located on a live map,” explains Stapleton-Coory. “It’s like Uber; you’ll just be on the map surrounded by a bunch of pins which represent venues, and what we call ‘shouts’.”

A shout is a promotion or alert a venue can post at any time and will last from anywhere between one and 24 hours. It might be a parmy and pint deal, a promotion for new-season produce or VIP entry to a gig. All users have to do is buy the shout and redeem it. No cash, no emails: it all happens within the app. The shouts will appear and disappear in real time on the map.

“We’re not trying to be a bargain hunter platform,” says Stapleton-Coory. “This is also a powerful tool for venues to communicate directly with their patrons. Maybe it’s a venue promoting it has live music from 5pm.”

Venues are welcome to post “universal shouts” for free as often as they like, says Giorgio. “These are shouts that do not require purchasing through the platform. They’re basically similar to a Facebook post, only within a dedicated hospitality network where they can reach their followers with push notifications, rather than being buried in the Facebook feed.”

Both Stapleton-Coory and Giorgio have hospitality backgrounds and are acutely aware of the need to fill seats in an increasingly competitive marketplace.

“We know that bars are always dead more often than you’d like … so you’re constantly trying to drive foot traffic into the venue,” says Stapleton-Coory. “But all of the third-party alternatives don’t seem to be working and just aren’t good for venues.”

He says some venues are being forced to discount so much they’re actually losing money through special promotions. And it’s not a strategy that works for everyone.

“Every venue is different, so these businesses need a customisable platform that lets them reach their customers on their terms. That’s why we leave price point up to the venue to decide.”

When a venue wants to post an “exclusive shout” or an offer that requires a purchase, they set the cost themselves and app users buy them. Shoutback retains a small clip of each sale.

“We are trying to be as friendly for the venues as possible and this is as cheap as we can feasibly make it and still be viable as a business,” says Giorgio.

The pair has locked in a number of venues across Adelaide and Sydney, with more to come nationwide. BRKLYN, Hains & Co, Bar Torino, 2KW, Electra House, The William Bligh, Cantina Sociale and Fat Controller have already signed on locally.

For now, they’re offering Adelaide venues a lifetime free membership as an incentive to join. Once they expand further afield, they’ll look to charge a small yearly membership fee.

Shoutback is available on iOS. An Android version will soon follow. 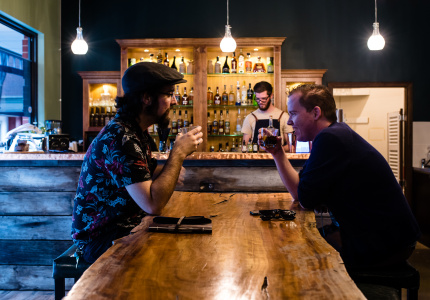