This Is Shiraz Gin, But Not As You Know It

Most on the market use fresh grapes, but this McLaren Vale drop starts with a “rich, robust” shiraz. And the result is meant to be savoured, not smashed. 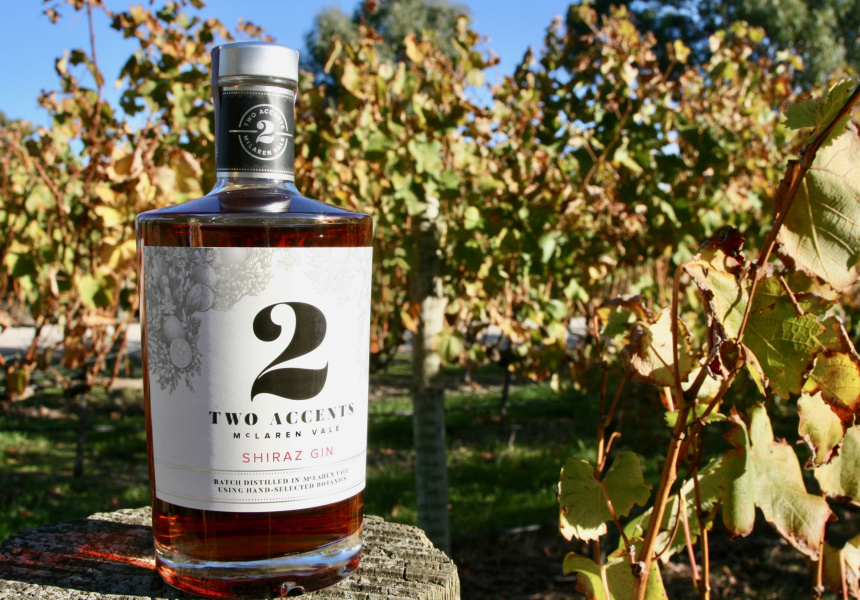 Growing up on Guernsey, an island off the coast of Normandy, Laurie Bilby and her family learned to do most things themselves. Located between France and England, the second largest of the Channel Islands is just 15 kilometres from end to end and “there isn’t much to do except play sport, work and go to restaurants”.

Moving to Adelaide’s southern suburbs in 2010, she met her partner Adam Jacobs, the winemaker at McLaren Vale’s Doc Adams. Marrying their two passions, Bilby launched Two Accents Gin last year to make a Shiraz Gin. Just don’t expect it to taste like The Other Shiraz Gin on the market.

When Bilby says “their gin is made differently to mine” she’s not kidding. While Victoria’s Four Pillars (and locals Barossa Valley Distilling and Seppeltsfield Road Distillers) use fresh grapes, Bilby’s starting point was the 2015 vintage of Doc Adams’ 1838 First Vines shiraz, a “rich, robust” red the colour of ink with smoky liquorice and berry flavours.

Finding botanicals that made sense in gin and could complement those flavours took some time. For the distillation process, Bilby enlisted the help of McLaren Vale Distillery’s John Rochfort and settled on just four. “Heaps and heaps” of oranges and caraway sit alongside the juniper, with apple to add a little crispness.

Each 1000-litre batch has about 30 bottles of the premium shiraz added to it, and the resulting spirit is a rich, plum-coloured liquid that opens up like a red wine when swirled in the glass. There’s a hint of sweetness, too. “Adam makes very fruit-driven reds – then you get the tannins, you get all those berry flavours coming through on the wine and then obviously juniper.”

The result is more complex than other shiraz gins, and is meant to be savoured rather than smashed. With three batches almost sold out, Bilby is getting ready to release a fourth soon and will have to craft a new base gin because she’ll be switching to the 2016 vintage shiraz.

Two Accents also makes two other gins: the easy-drinking Dry Gin “deliberately hasn’t got a shopping list of botanicals” – just Riverland lemon, roasted coriander and cardamom alongside the juniper. And a richer Barrel-Aged Shiraz Gin aged for nine weeks in an American Oak cask that used to hold 1838 First Vines shiraz. Traditionally barrels used to age spirits get individual names and when it came time to christen hers, there was only one name Bilby considered – “it’s called Gladys, because that’s my gran’s name.”