“Traditional Mexican has been mixed up with Tex-Mex food. It’s not the same. There is Tex-Mex food that’s very good. But it’s not Mexican.”

Adelaide may have come leaps and bounds in its understanding and appreciation of Mexican cuisine – thanks largely to places such as La Popular Taqueria, Revolución Mexicana and Taco Quetzalcoatl – but there’s still a way to go.

Guevara says diners still walk in to her restaurant expecting hard-shell Old El Paso tacos. “Those are a no-no,” she says emphatically. “They don’t exist in Mexico.”

We’re standing in Oddio’s courtyard, where Guevara will cook a six-course dinner on Thursday November 21 . Syrian Mobile Disco will follow on Friday December 6.

The pop-up dinner is part of Guevara’s daily mission to educate Adelaide diners on the intricacies of Mexican cuisine – from proper taco-eating etiquette to correct use of condiments (tip: don’t mix and match).

“If people at the restaurant ask to have salsa with their mole (a rich, reddish brown sauce made with cacao) I’ll say no,” she says. “I’ll say we can bring it to you but we recommend you don’t put it on. There are salsas that go with some tacos but they don’t go with other ones. We are very strict with that.”

For this reason, you won’t find bottled salsas on the table at her taqueria. “If you put five bottles on the table [diners] will put five sauces on the tacos,” adds partner and co-owner Kor-jent van Dijk.

The pair host semi-regular dinners at their Port Adelaide restaurant – with a menu that extends beyond their daily taco offering – to introduce diners to the diversity of Mexican food. “When we do dinners, it’s more like an experience rather than just [being about] the food,” says Guevara. “We like to chat to people and explain the dishes.”

There’s often a clear-cut distinction between the cuisines people are willing to fork out for and those they’re not. Take a look at most cheap eats lists and you’ll find Asian, Mexican and Middle Eastern food is over-represented compared to European cuisines such as French and Italian. Guevara has noticed this division and wants to educate people on the subtleties of Mexican cooking.

“Mexican food is very complicated,” she explains. “It’s not an easy thing to cook, so it bothers me a lot when you see Mexican food being very cheap, because … it’s not, if you do it right. The mole sauce takes hours to make.”

The sauce – made from chillies, spices, nuts, sugar, tomatillos and cacao, roasted and ground into a paste – is traditionally eaten at celebratory events, Guevara explains. “For weddings, women get together and prepare the sauce … there’s a whole process, and because it’s a long process it’s more like an offering.

“It’s a very nice combination of flavours – savoury, salty and sweet – and we normally eat it with chicken.”

That’s one of the dishes Guevara will be cooking on November 21, along with ceviche; grilled corn smothered in cheese and chilli; sope (thick tortillas piled high with refried beans, potato, chorizo and lettuce); dried chilli stuffed with goat’s cheese and refried beans; and dulce de leche (three-milk cake) for dessert.

While we speak, Syrian Mobile Disco’s Mark Kamleh is charring cauliflower on a nearby grill. He’ll be serving it, and barbequed chicken, alongside hummus, mutabal (eggplant dip), pickles, salad and pita at Oddio’s Syrian feast on December 6. He’ll also serve kibbeh nayyeh (raw lamb minced nearly to a paste and mixed with cracked wheat). “Kibbeh can come fried or baked, but this is straight up raw lamb. It’s my favourite dish.”

Kamleh is perhaps better known as one-third of Skin Contact DJs (hence the “mobile disco” concept), and for his previous food stalls, Tiger Mountain and Hummus Where the Heart Is. Impressive pun-game aside, he attributes the inspiration to his dad, Michael. “The whole thing started from dad’s recipes. All the marinades, all the dressings, the hummus – all the important things are dad’s.”

Michael ran a Lebanese restaurant in the ’80s called Beirut at Night (in the current Falafel House digs on Hindley Street). “Lebanese food and Syrian food are almost identical because Lebanon and Syria used to be one country,” he explains.

The place was regularly packed – due to the food, of course, but the scarcity of late-night venues back then certainly helped. “Back in the early ’80s nothing was open after six o’clock except Hindley Street. It was the only place you could go out at night in Adelaide. Petrol stations used to shut at six o’clock.”

These days Michael is out of the hospitality game – but he works the grill alongside Mark as a key member of Syrian Mobile Disco. At the Oddio dinner, his “dynamite” baklava will be served for dessert. “It’s less syrupy than the Greek one,” says Mark. “Everywhere you go, baklava normally has one nut as the stuffing,” adds Michael. “The baklava I make has about nine different nuts, in different ratios. The majority is pistachio.”

It’ll be a full-family affair: Mark’s mum (a professional singer when she lived in Syria) will perform during the evening.

Like Guevara and Van Dijk, Mark and Michael hope the dinner can introduce Adelaide diners to the breadth of their cuisine. “How it’s been represented in Adelaide is that yiros-shoppy, ‘Go get a kebab’ kind of vibe,” says Mark. “There are other dishes.” 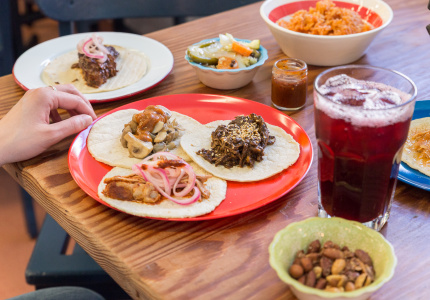