Passata day is a sacred ritual for Italian-Australian families. It always falls in the first months of the year, when tomatoes are at their prime. We stopped into Pizzateca to see how the Mitolos do it, and scooped the rewards. 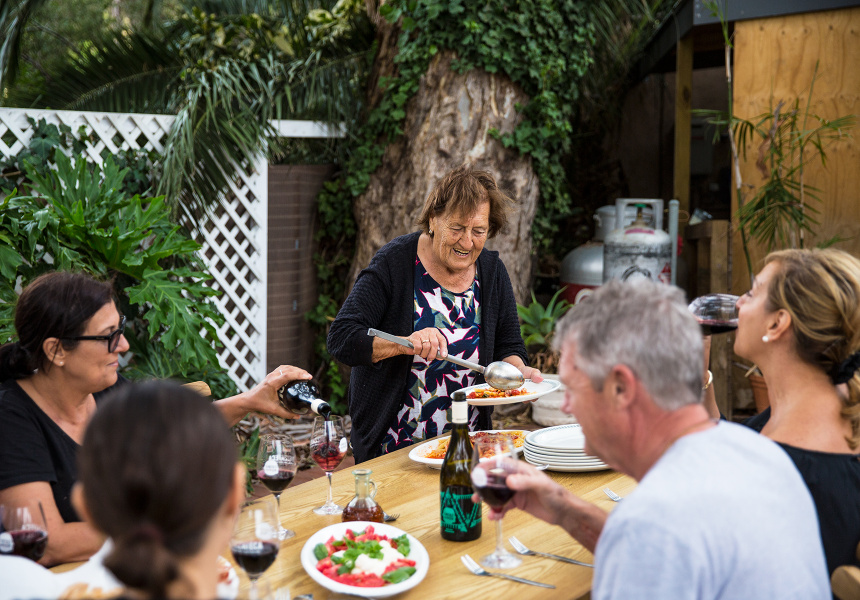 If Pizzateca’s chief pizzaiolo, Tony Mitolo, had a dollar for every time he fielded that question, he’d be on a fast track to retirement.

So let’s get one thing clear: sugo, or passata, is essentially tomato puree without skin or seeds. It’s the first thing to hit the uncooked, stretched-out dough of any red-sauce pizza.

Bottles of the sweet stuff – which you can buy at the McLaren Vale restaurant – are plastered with a crystal-clear, all-capitalised message: “SUGO MEANS SAUCE”. Simple. 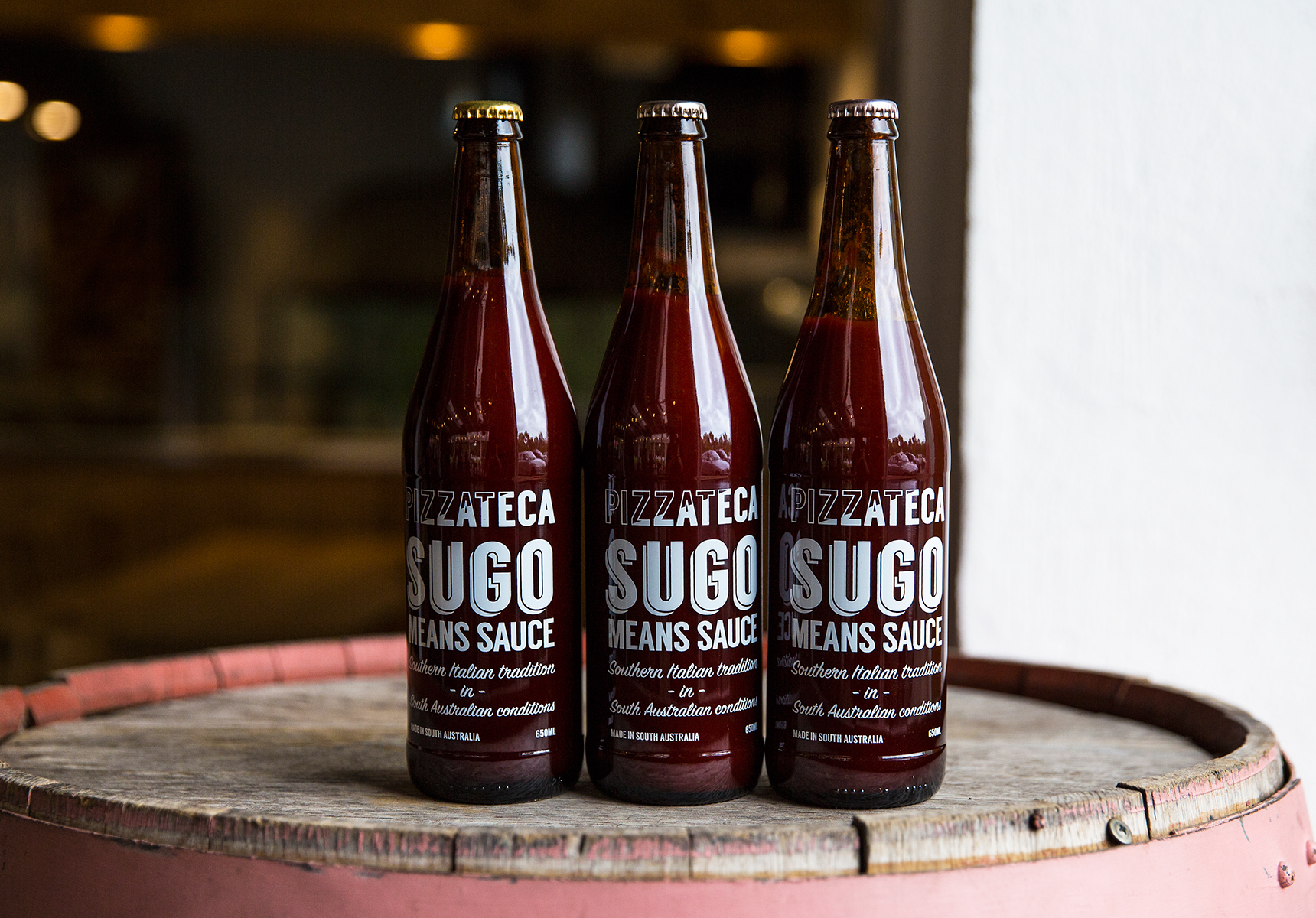 Like any event that revolves around food, sauce day is a sacred ritual for Italian-Australian families. It always falls in the first months of the year when tomatoes are at their prime. As the name suggests, most families set aside a day, or a weekend. But it’s more like Groundhog Day for the Mitolos, who do it a few days a week for around three months.

When Broadsheet stops in at Pizzateca in mid February they’re doing a batch under the veranda. Tony’s dad, Vito, says they’re just over halfway through this year’s haul of tomatoes. And “haul” isn’t an overstatement.

Last year they churned through 14 tonnes of Virginia-grown roma tomatoes. This year they’ve more than doubled that to a mammoth 30 tonnes, though Tony says “They’re not as watery this year”. Nonetheless, a small car weighs a single tonne – you do the math. 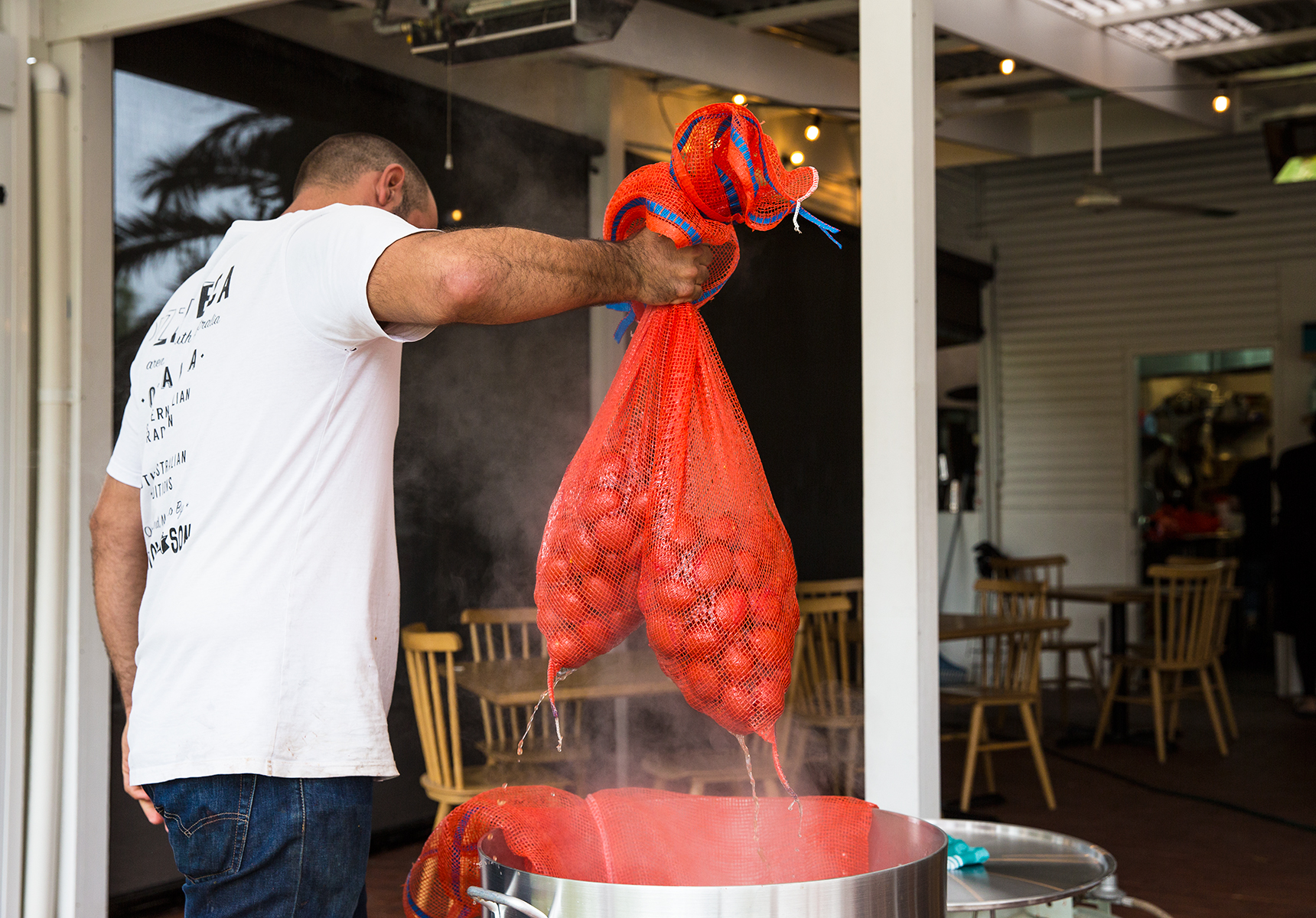 When Tony says “#allhandsnocans” he means it. You won’t find a supermarket-bought can of tomatoes here.

“It’s relentless,” says Tony’s aunty, Annarita. But with an often-booked-out restaurant and seemingly countless pop-ups across the state, it makes sense to up the ante.

Every Italian family has (at least) one overseer, whose job is particularly pertinent when sauce day rolls around. Here it’s Vito. “He has a spreadsheet he updates every week,” says Tony. “Vito’s the stats man!” Annarita pipes up. Everyone – Vito included – has a station on the production line.

Running on macchinetta coffee and pannettone, they start by quickly sorting through the day’s tomatoes. The chosen ones are blanched whole – but not cooked – in boiling water, “To break the skin so it just rips apart,” says Vito. 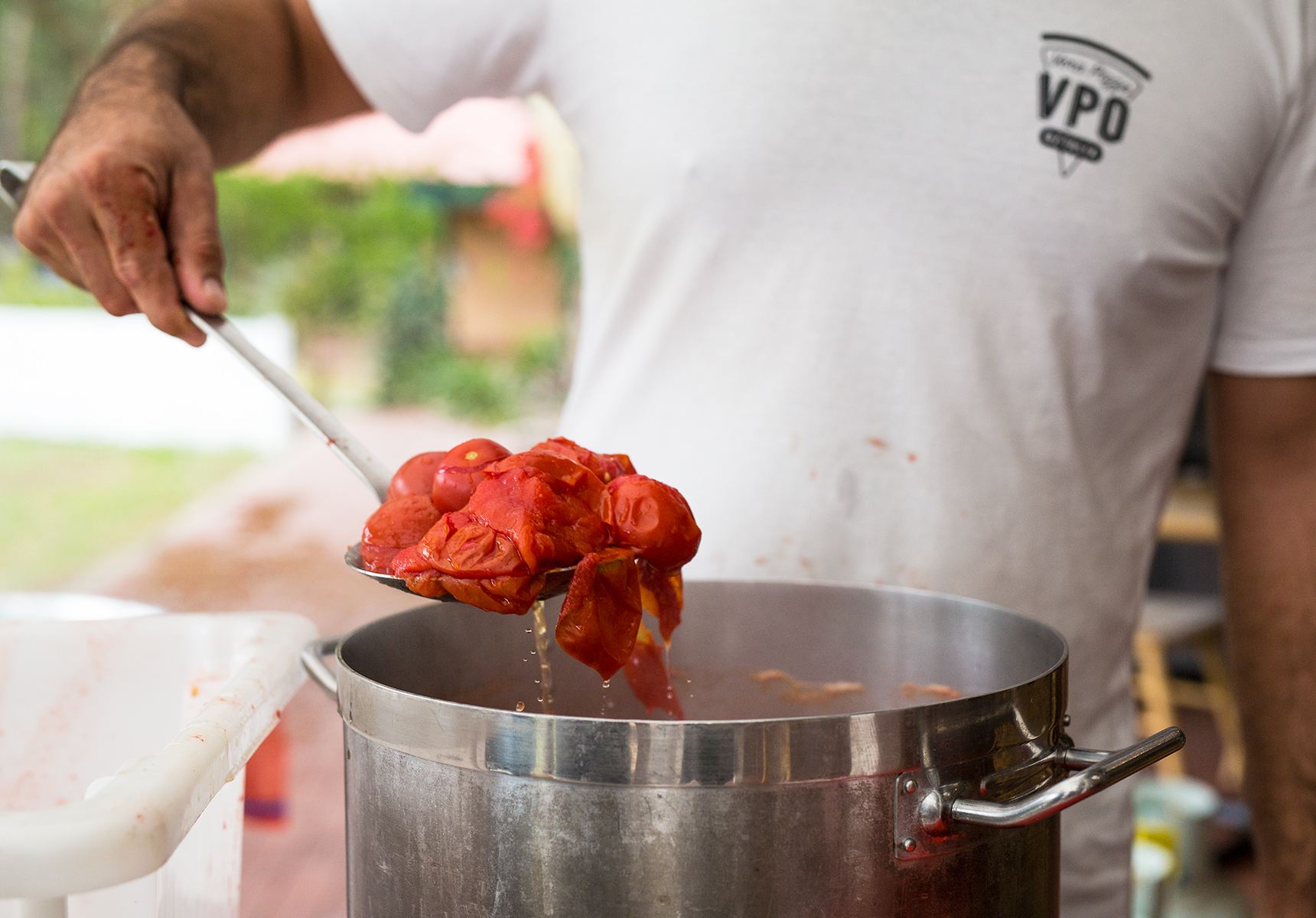 Sauce making is a nuanced process that no two families do exactly the same way. Mine, for example, skips the blanching stage and goes straight to pulping the tomatoes raw, or crudo.

That process is more or less the same for everyone. It involves passing the tomatoes through a pulping machine, which removes the skin and seeds, leaving a bucket-full of bright-red sauce.

It’s sloshed from bucket to tub, then poured into bottles. “Is that a bit too full?” Tony’s fiancé Suzanne shouts, holding a bottle in mid air, from behind a sauce-filled tub. “They need a pour line.” Each bottle is cap-sealed before being boiled for half an hour. 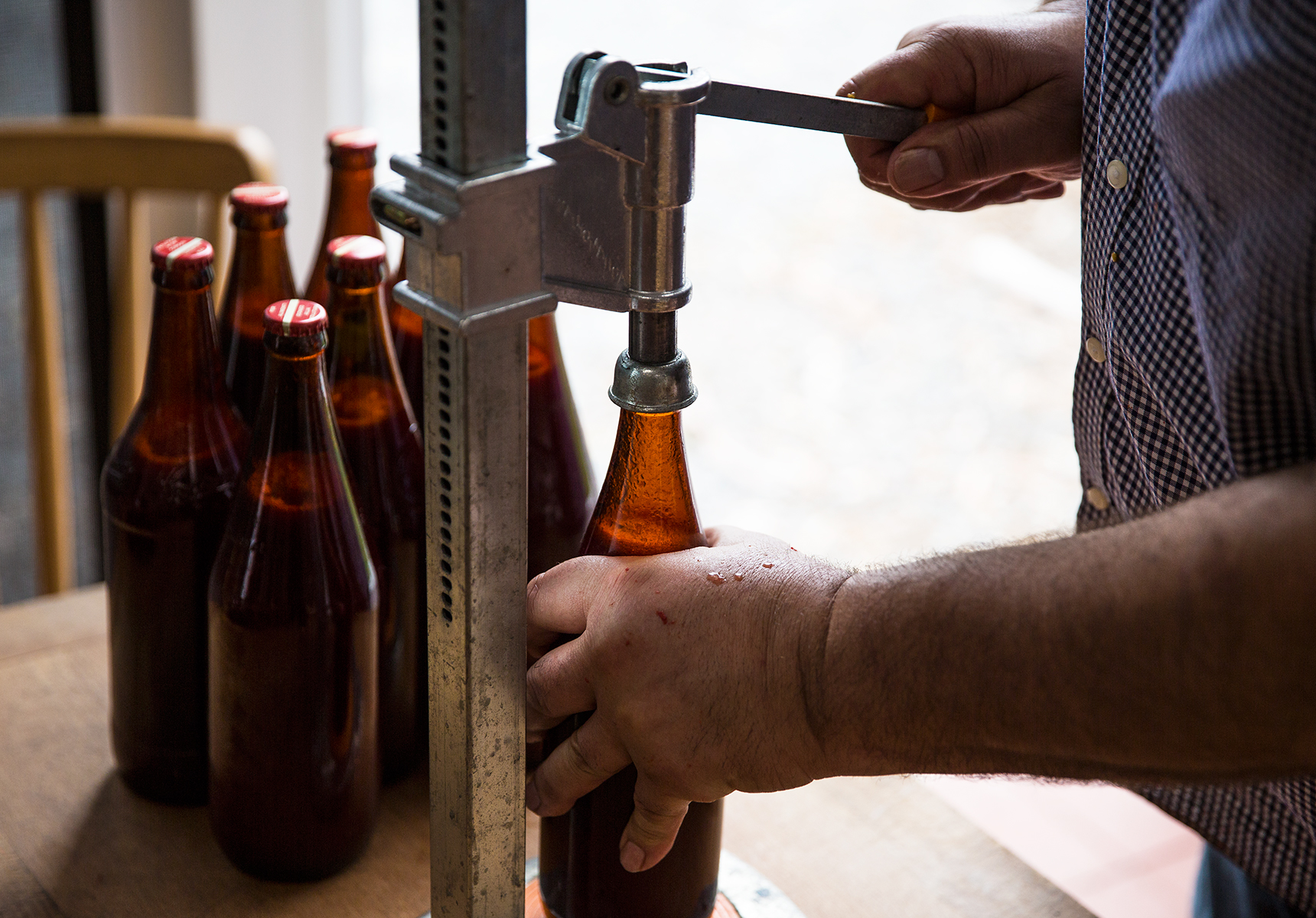 Yes, sugo is age old. But it never occurred to me this wasn’t always the way it was done. Most Italians who grew up during wartime and then immigrated to Australia, like Tony’s nonna and mine, could barely feed themselves.

“A few years ago I said to Mum, ‘You had no money in Italy – how did you do the sauce? If you couldn’t afford food how did you buy the bottles and lids?’” Vito says.

“They never did it like this when she was a kid,” he explains. “They didn’t bottle the sauce – they laid it out, dried it and made it into a paste. If you look it up you can find pictures of whole villages full of boards with sauce drying into paste. They’d mix oil and water with it when they wanted to make a sauce.”

Anyone who’s dabbled in sauce day – not least the Mitolos – knows it’s a marathon not a sprint. And while you might cross the finish line looking like someone at La Tomatina, there’s almost always the promise of a bowl of pasta crowned with the day’s sweet, sweet labours. 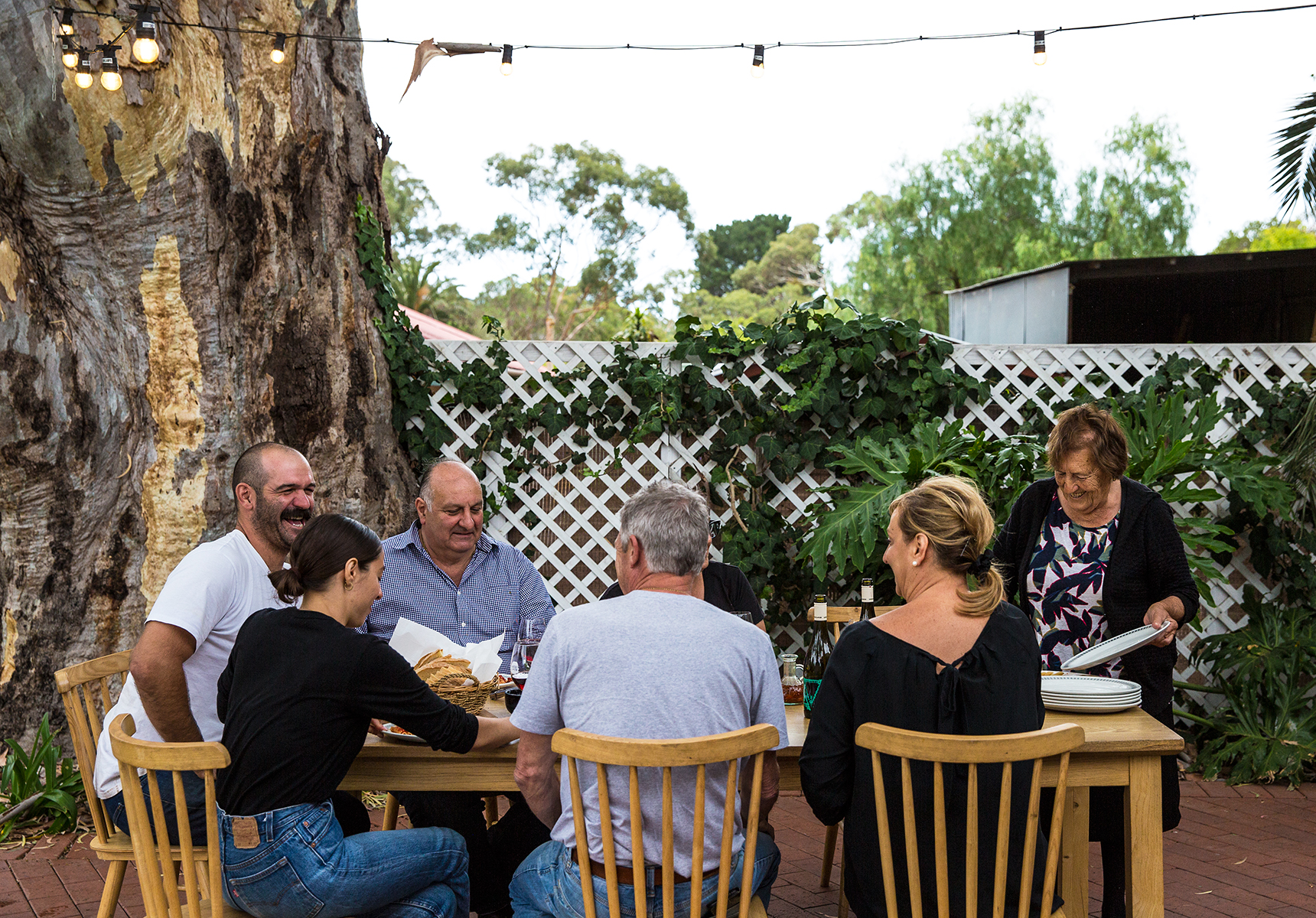 “It’s all about the pasta, you know that,” says Alba, another of Tony’s aunties. Do I ever. While everyone else mans their respective stations, Tony’s nearly-90-year-old nonna is quartering fresh tomatoes – to add to the passata – for a pasta sauce.

The restaurant kitchen is her domain today. She mutters in Italian about the stove not being hot enough. Alba turns to me and asks, quietly, “Have you watched that Jamie Oliver show where all the nonnas tell him off? ... They’re all the same.” But nonna knows best. When she pops out to check on production, Vito quips, “The boss is here”.

Aprons fly off for lunch and our photographer and I join the Mitolos for a bowl of pasta, then another, before a third is packed into a takeaway container. Nonna knocks off with a glass of wine, as does everyone else. Tony swipes at the last piece of penne on his plate: “Sugo ... more like su-gone.”

You can buy bottles of Pizzateca’s sugo at the restaurant.