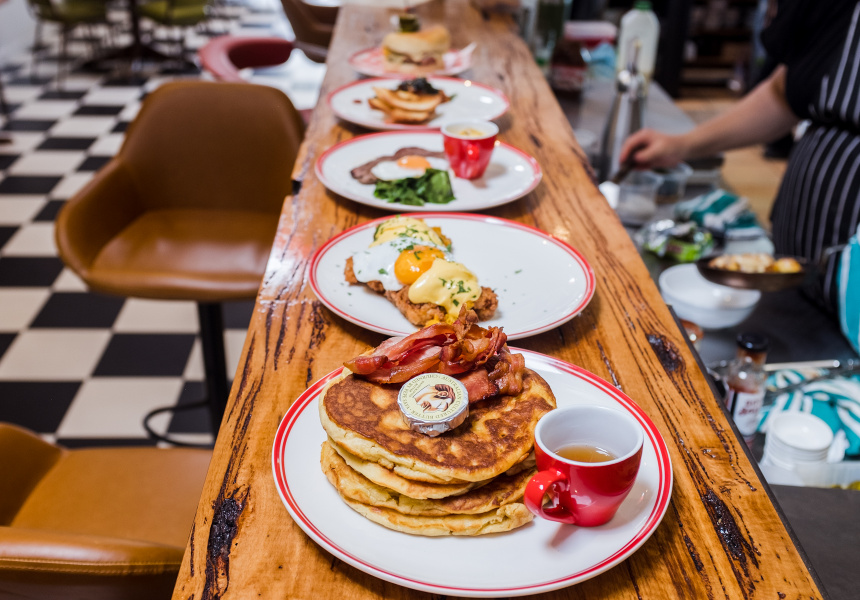 If you want to eat a burger at 7am, Dirty Doris is the place to do it.

“You can come and get a cheeseburger or a rump steak at 7am, no worries, no judgement,” says chef-owner Denny Bradden. “You can have cake for breakfast too, no problem.” (Hello, croissant-and-butter pudding.)

Bradden’s diner opened on Aldgate’s main strip earlier this month. The menu says: “Welcome to Doris’ world.” (The name Doris is a tribute to Bradden’s grandmother, who influenced her cooking.) That world is a love letter to the North American diner, complete with loud '70s and '80s music, vinyl chairs, retro tables and alcoholic milkshakes. As Bradden says, “it’s a bit of a party”.

The all-day menu features corned-beef hash, a sausage and egg “McDirty”, Reuben sandwiches, calzones, fried chicken and breakfast ramen – available from 7am. There’s also a children’s menu with scrambled eggs, a few pastas and a chocolate sundae. Bradden talks up the pancake stacks, which are doused in maple syrup and served with Pepe Saya cultured butter. You can get it with bacon and a fried egg, too.

“I wanted to open somewhere you could get something out of the ordinary for breakfast,” Bradden says. “We are offering bacon and eggs, but there’s no smashed avo on our menu. But we do have vegan chilli fries, so it’s that kind of vibe – something casual and different than a lot of options. It’s basically a cocktail bar where you can get breakfast all day.”

Speaking of cocktails, you’ll find plenty, including a Negroni float, a gin slushy, Espresso Martini and a strawberry grapefruit Mimosa.

For Bradden, opening at 6 Strathalbyn Road is like coming home. At 18, she worked in the Aldgate Cafe, which operated in the space for 30 years. After starting her cooking career making pizzas and pasta there, she spent her 20s in the UK where she cooked across the country. When she returned to Adelaide, she worked in a string of venues including Jolley’s Boathouse, The Lane, Low & Slow American BBQ and Patch Kitchen and Garden. It was working at Patch that she met Dirty Doris’ house manager, Andrew Moncrieff.

Moncrieff, previously at Hills favourite Lost in the Forest, has brought his wide knowledge of wines to the venue. He’s populated the list with local drops including Worlds Apart Wines, Ochota Barrels and Murdoch Hill.

The fit-out is all Bradden’s vision: chequerboard flooring, retro furniture and a polished timber bar top overlooking the kitchen. “I really like the open-style feeling you get at places like Shobosho or Good Gilbert,” she says. “I wanted somewhere fun and somewhere you could have a good time and really designed the interior around the central bar, where you can sit up and watch your food being cooked and have bottomless batch-brew coffee.”

The latter is courtesy of Adelaide roaster Monastery. Bradden has plans to sell house-made sauces and pasties from the front of the diner soon, as well as plans for dinner trade, which begins this Friday.

Bradden, whose family own the Aldgate Chip Shop, says Dirty Doris also signals a change in the area. “Next door to us there is a Japanese restaurant, which is doing a really good job and it’s really signalling something,” she says. “Aldgate has had a lot of the same things for a long time and it’s now starting to change.”