Poké Me Opens in the CBD

The Hawaiian dish is turning Japanese. 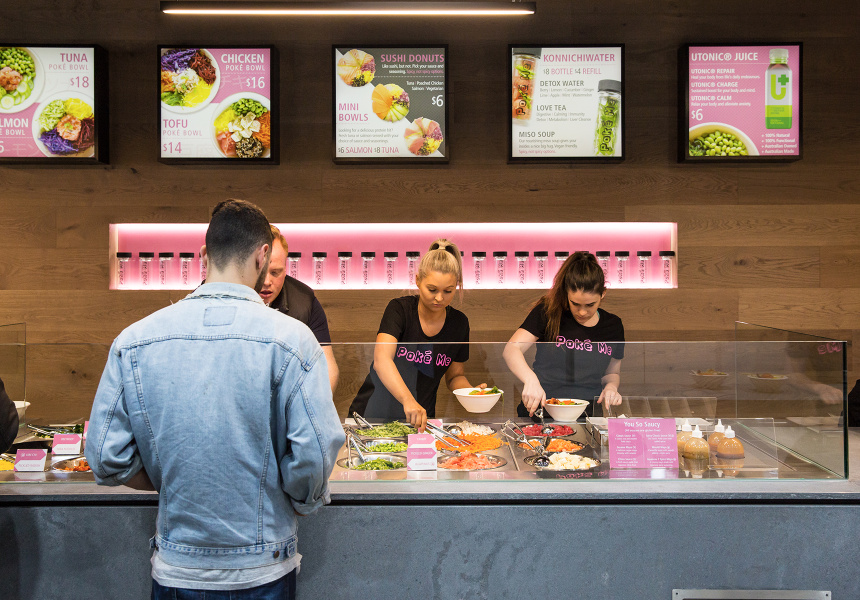 Poke is trending. Pronounced poh-keh, the Hawaiian diced-fish dish is on the front foot in Australia. And like any trend, it’s up for interpretation.

Poké Me launched in Melbourne late last year, but on the back of a successful Royal Croquet Club pop-up, opened its first flagship store in Adelaide in August. It’s just the beginning, though. Co-founders Leigh Morgan, Christian Robertson and Toby Yap are striking while the iron’s hot, with plans to roll out 20 stores Australia-wide in the next year.

“Poke has innovated a space [in the market] that hadn’t really been touched before,” says Robertson. “So we thought, ‘let’s innovate poke’.” Taking the bare bones of the Hawaiian dish, Poké Me hones in on a “Japanese flavour spectrum”.

Essentially, it’s a deconstructed sushi bowl: you start with a set-price protein (tuna, salmon, chicken or tofu); choose a rice, soba noodle or “green” base; then add toppings, sauces and seasonings. For once, avocado isn’t extra.

“Poke in the US is very sweet [because of] all their dressings,” says Morgan, “and they use canned corn and pineapple”. His version relies on punchier, fresh flavours from sauces developed in-house. Ingredients include yuzu (a Japanese citrus fruit), togarashi (chilli-sesame powder) and wasabi.

Sushi "doughnuts" are a snack-size alternative. The entire menu is available on UberEATS.

“It’s built for allergies,” says Robertson. Everything is gluten-free and vegan, bar the obvious fish and chicken, and two mayonnaises (which will soon be made vegan-friendly).

“We’ve invested a lot of time [making] the whole process as efficient as possible,” Morgan says. “You walk through as your bowl’s being built. Being a health-food-based business, people want to know exactly what’s going in their body.”

The fast-paced, in-and-out concept lends itself to Gawler Place’s corporate crowd. “To stand here at lunchtime and see five or six thousand people walk past … we needed something here,” says Morgan.

The interior, like the menu, bears Japanese influence: dark features and wooden furnishings, with a splash of colour from a pink feature wall. The concrete Caesarstone benchtop houses a purpose-built fridge that will become standard in all stores.