Pirate Life’s Newest Beer Is a “Boilermaker in a Bottle” 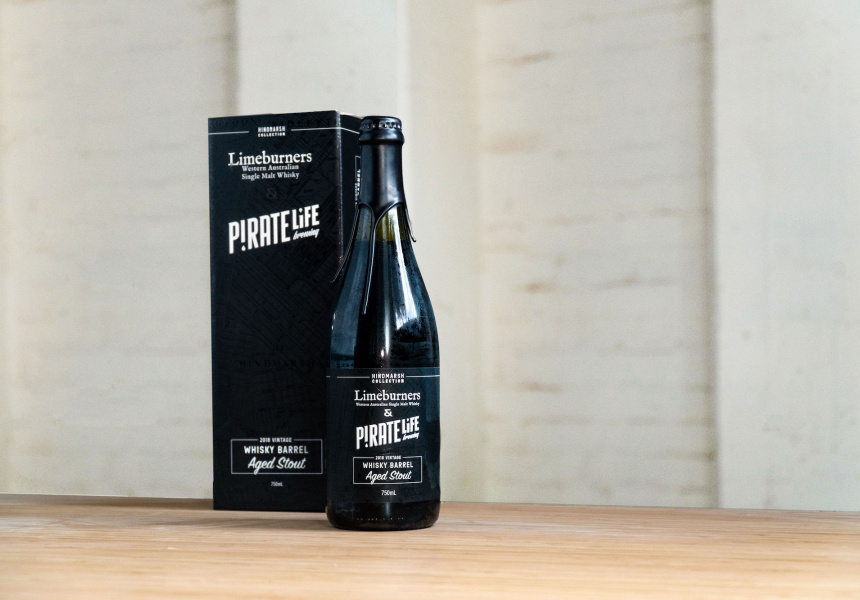 From upstart local brewery to national award-winning beers and a multi-million dollar buyout by the world’s largest brewing company, Pirate Life’s journey since its founding in 2015 has been short but eventful. Now, as the company prepares to move into its $15 million brewhouse in Port Adelaide, there are more developments on the horizon.

Co-founder Mick Cameron tells Broadsheet they are planning to brew a staggering 41 new beers this year at the existing Hindmarsh digs, which is now a testing ground for new products. The brand’s big sellers – lager, pale ale and IPA – will be brewed at the Port.

Ten of the new releases will be available at Pirate Life’s fourth anniversary party in March. The first, Whisky Barrel Aged Stout, launched last Thursday. It’s been in the works since 2016, when WA’s Great Southern Distilling Company founder Cameron Syme stopped into Pirate Life’s Hindmarsh site with a few bottles of his Limeburners whisky and proposed a collaboration. Now, almost three years later, the beer that Cameron calls a “boilermaker in a bottle” is finally ready to drink.

The first shipment of single malt whisky American oak barrels made the journey across the Nullarbor in late 2016, and after some quick repairs at a cooperage in the Barossa were filled with stout – a variation of Pirate Life’s standard stout, but a bit mellower and less bitter. The final product is a blend of that batch with 12- and six-month aged stouts. The sweetness of the newer brews is offset by the drier, more savoury character from the older ones, while the whisky barrels impart hints of vanilla and spice. It’s smooth and surprisingly easy to drink, despite an alcohol content of 8.6 per cent.

Just nine kegs were produced; the rest went into 4,862 750 millilitre bottles. It’s the brewery’s second bottled release (after the tempranillo barrel-aged Cerveza Negra – a collaboration with TomFoolery Wines). Cameron acknowledges that “nobody [who’s] four years old creates traditions,” but he hopes this will be the start of one.

The whisky-barrel-aged stout is the first of a series of annual, limited-edition releases. But before they begin working on next year’s product, the Pirate Life crew have an obligation to fulfill – they’re heading to Great Southern’s Albany base later in the year to have a go at making their own whisky, as part of the second stage of the Pirate Life x Limeburners collaboration.