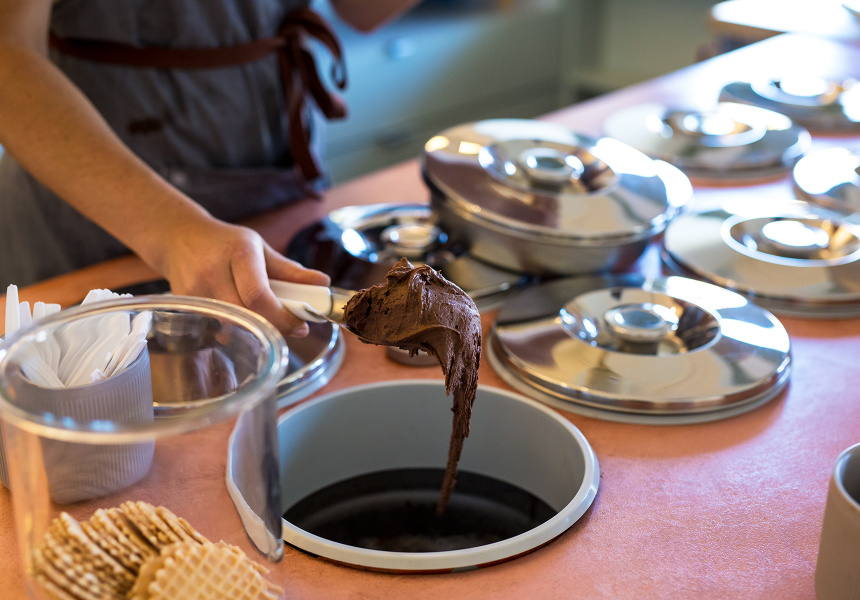 “We have a saying – noi lo facciamo davanti a tutti – which means, ‘We do it in front of everyone’… The gelati, I mean.”

That’s Adriano Macri, owner of Bottega Gelateria, a newly opened gelati store in Henley Beach that’s like a “journey back in time”.

In the kitchen it’s a one-man show, and you’re invited. Behind a huge pane of glass Macri makes everything – including labour-intensive nut pastes and caramel – from scratch, by hand and in small batches.

He considers it a “lost art”. So does Italian organisation Slow Food, which has declared, he says, “fewer than five per cent of gelati stores worldwide make gelati from scratch.”

Everything he does is on display – except the actual gelati. It’s hidden under lids in deep steel canisters called pozzetti, where it’s protected from light, air and moisture – “gelati’s worst enemies”, Macri says. “I took a big risk with that, but there’s a rule of thumb in Italy – though it doesn’t apply everywhere – to go to places where you can’t see the gelati.”

Macri, who was born in Adelaide, lived in Italy for almost a decade. While working as a flight attendant he scoured the boot-shaped country’s gelaterias from top to toe, and even studied at Carpigiani Gelato University near Bologna. He also worked under internationally renowned “gelati king” James Coleridge in Vancouver.

A concept for his own gelateria has been bubbling away since then. It was years in the making, but Macri has converted a former real estate agency – just down from Henley Square – into a pastel-coloured snapshot of Italian summer.

Gelati churns in a Cattabriga machine right next to the pozzetti, which incorporates less air than commercial operations to make for a denser product. It’s all done by feel; “there’s no computer beeping to tell you it’s ready,” Macri says.

I start sampling with modest intentions, but end up with a fistful of spoons. It’s no wonder he scooped through around 250 kilograms on opening weekend.

Hazelnut is the jewel in the crown, and with good reason. Macri imports the world’s “queen” of hazelnuts from Italy’s Piedmont region. The result is intensely roasty, at the same time delicate, and without the bitter aftertaste of homegrown hazelnuts.

Want to go all-out? Have the inside of your cone coated by an undulating chocolate fountain. Or there’s the stracciatella strewn with perfectly hardened shards of it – Cottee’s Ice Magic style.

Of a dozen-or-so flavours, some – such as hazelnut, pistachio, salted caramel, chocolate and vanilla – will stay. Seasonality will govern the others.

The strawberry sorbet is a game changer. It’s not normally my poison but here its texture – seeds included – better evokes the actual fruit than any silky-smooth version I’ve had. The organic lemon is zingy and not sickly-sweet. At the moment it’s made with fruit from Macri’s uncle’s tree, “So I can call it ‘organic’ ‘cause I know for sure they are,” he says.

I leave riding a sugar high, and suspect you will too. Particularly should you involve the chocolate fountain.