Paloma, a Mediterranean-Inspired Cocktail Bar Is Coming to Peel Street

A new bar from the team behind 2KW will specialise in agave-based spirits and sherry, with tinned anchovies, terrines, charcuterie and cheese to eat in or take home. 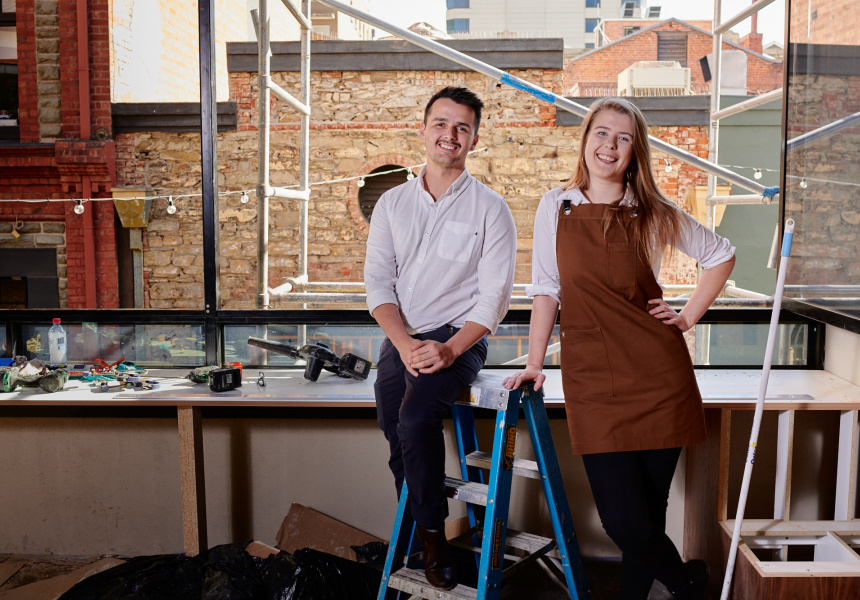 The concept for incoming Peel Street bar Paloma started with a painting. Owner Marty Palmer (of Palmer Hospitality Group, which also operates 2KW) saw Picasso’s La Cruche fleurie (Jug of Flowers) in San Francisco’s Museum of Modern Art and inspiration struck. “The colour, the whole palette, we’ve really drawn from that,” he says of the bar’s design. “That’s kind of where it started. And it evolved from there.”

The two-level venue, which will open in the former Chihuahua Bar site at the end of the month, was almost named after the cubist painter before the team settled on Paloma – which means “pigeon” in Spanish, says manager Luke Fleming. “Dove, I think we like to say,” Palmer interjects, with a smile.

It's also the name of one of Fleming’s favourite cocktails (a tequila-based drink popular throughout Mexico). “I’m a very big agave-spirit nut,” he says. “Peel Street has you covered for whiskies – Clever Little Tailor and Malt & Juniper are excellent – I don’t want to compete with that. I’d like to push my love of agave spirits. I can talk your ear off about the ageing process of agave and mezcal for hours.”

Expect clean, fresh drinks made with house-made preserves, including a twist on the classic Aperol spritz (featuring Aperol, fino and mandarin) and, naturally, the Paloma (tequila blanco, gin, grapefruit and soda).

The wine list is by 2KW’s head sommelier Dan McEvoy, who’ll hone in on southern-European varietals from local and international producers including albariño, piquepoul and nebbiolo. There’ll also be a focus on sherry, such as fino and oloroso. “I’ll keep building the list and ... by summer we’ll hopefully be rock-and-rolling with a sherry program so we can introduce more people to not-just-your-nana’s old cabinet,” says Fleming.

The Mediterranean vibe is mirrored in the menu, which will feature tinned sardines and anchovies, terrines, pates, charcuterie and cheese. Pickled, fermented and preserved goods will be jarred and displayed in the Paloma pantry, and available to eat in or take home. With no kitchen, the team had to get creative: they’re planning to bring “more love and attention to detail on how we plate food”, says Fleming. “It’s not just something to snack on. If you’ve forgotten to make plans for dinner or if you can’t get a booking at a restaurant, we can feed you.” The menu was designed by 2KW’s executive chef, Trent Lymn.

While the majority of talent has been pulled from the King William Street bar, including 2IC Vanessa Rech, Palmer is quick to stress the difference between the two venues. “2KW is its own brand … In my mind, that doesn’t fit into the idea of Peel Street or even ‘small bar’,” he says. “The decision to go into Peel Street is really one of community. Paloma is not going to be a standalone destination – Peel Street is the destination. So we’re very tuned in to the fact that we’re a part of the whole.

“At the same time, we saw an opportunity to do something slightly different there … we’re hoping to inject some new energy and life into it … to give the street another string to its bow.”

The team has enlisted interior designer Claire Kneebone (who worked on 2KW) and Mo Hardy from Nest Design for fit-out and graphics. Palmer cites the Mediterranean and the old bars of Nice as inspiration, along with the southern coast of Spain, Cuba and South America. Expect soft colours – terracotta, biscuit, ecru and greys – with accents of rattan, brass and black. Tying it all together is a commissioned work by local artist Neil Thwaite.

Fleming says to expect an “air of sophistication”. “But we don’t want to feel like an exclusive place. This is a beautiful space to share with everyone.”

Paloma will open at the end of the month.