A South Aussie icon, dressed up and matched with some of the state’s best drops. It’s not hyperbole to call the pie floater a local icon.

The signature South Aussie dish (a meat pie “floating” in pea soup, topped with a squirt of tomato sauce, for the uninitiated) was recognised as a state heritage icon by the National Trust in 2003. For decades it was an after-hours go-to among city revellers. Its popularity may have waned over the years (Adelaide’s last remaining pie cart closed in 2007), but a handful of local loyalists are bringing it into the modern-day.

One of them, the staunchly South Aussie Kings Head Hotel (it serves SA-booze only), has a modern interpretation on the menu. Its dressed-up version comes with Murraylands brisket and winter vegetables in green pea soup, topped with Beerenberg chutney. There’s also a vegetarian alternative.

This month, the pub will expand its regular offering with four new floaters, paired with Alpha Box & Dice wines. From November 20 to 25, choose between a snapper and chili pie in confit fennel and roast garlic puree; a leek, mushroom and ricotta pie in cauliflower puree; a hoisin duck pie in plum puree; and a beef shin pie in roast celeriac puree. They’ll be matched with AB&D’s Uncle sauvignon blanc, newly released Pink Matter rosé, Tarot grenache, and Lazarus NV ripasso respectively. Each pie and wine combo is an attractive $20.

Pick up an iced coffee and frog cake on your way home and earn your SA credentials for life.

Alpha Box & Pies runs from November 20 to 25 at the Kings Head, during lunch and dinner service. AB&D wines are on pour all month at the pub and its attached bottle shop, Sturt Street Cellars. 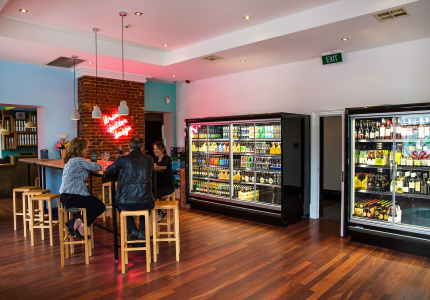