Out of the Ashes: A New Era for One of Adelaide’s Favourite Vego Joints

They lost their home and Central Market site in the same month, but that’s not enough to slow Let Them Eat owners Tanya Agius and Danielle Frankish. 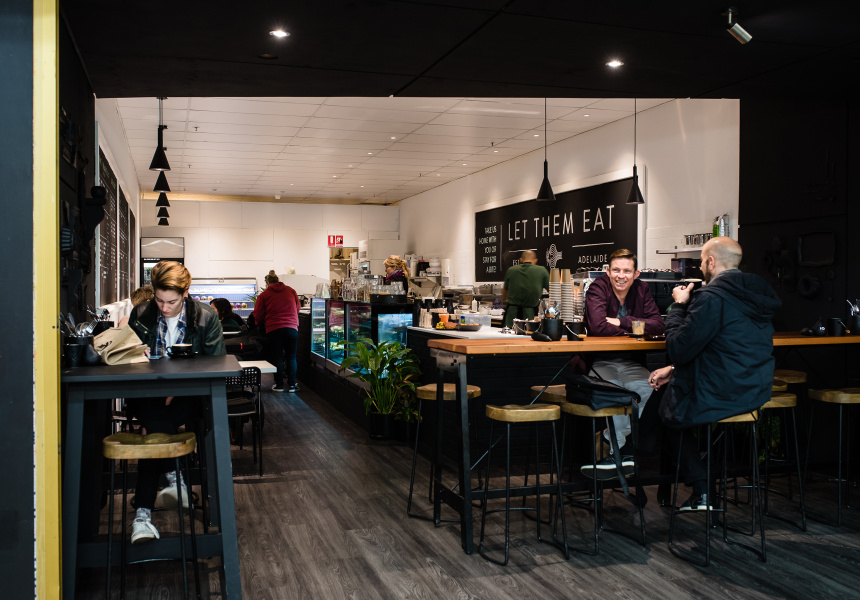 When Tanya Agius and Danielle Frankish were told to find a new site for their Central Market store earlier this year, they never thought they’d be looking for a new home at the same time.

Two weeks later their house in Skye burnt down due to an electrical fault, taking with it all of their possessions except for the clothes on their back. The couple was out at the time with their three-year-old daughter, Vida.

It happened just three weeks before Agius gave birth to their second child.

It's the kind of life-altering blow that would immobilise many. For Agius and Frankish, it only spurred them on.

“You have to keep going,” says Frankish. “What’s the point in dwelling on it? I think it shows you who and what is important.”

Let Them Eat began trading from its new location in late August. The vegetarian and wholefoods bar now sits in a larger, 34-seat space in Central Market Arcade (formerly the short-lived Adelaide Soup Kitchen and Toastie) just a few steps from its original site.

Much to the delight of regulars, there’s now a coffee machine. The shiny La San Marco machine pulls Segafredo’s organic and fairtrade dark roast blend, Tik Tak. In a departure from the proliferation of lighter roasts around town, it’s a smooth, full-bodied, Italian-style brew.

With the addition of coffee and extra seating, dining in is now a much more enticing option. If you need further convincing, there’s now a cooked breakfast menu featuring Egyptian eggs with sweet corn and feta fritters; a mushroom and haloumi burger; and sweet-spiced apple hotcakes plus a larger range of sweets.

But vegetables and pulses are the heroes here. Choose from the sweet potato and kimchi fritters; arancini with parsnip, sage and mascarpone; and pumpkin and red lentil lasagne then take home a tub of the house-made hommus.

The plant-based menu features plenty of vegan-friendly and dairy- and gluten- free options. But it’s not about ticking boxes, says Frankish. “The things we do that are gluten-free and vegan are so because that’s how they turn out … that’s how they’re best served,” she says. “We’re not forcing [the food] to be something it’s not.”

Amid moving home and business and settling in with a newborn, the pair completed the fit-out themselves, with help from Frankish’s dad and LTE team member Angelique Joy.

It’s clear there’s no slowing them. From its beginnings as a wholesale business nine years ago, the brand has evolved into two stores, a pop-up, regular market stalls and catering gigs.

“We’ve been doing this for a while, it makes you resilient,” says Frankish. “We started this from nothing ... and you learn to fight and you keep going because you have to and you want to. We’ve spoken to other people who had their house burn down and they’re either broken or more determined than ever. We want to be in the second category.”