This One Time, at Fringe Club 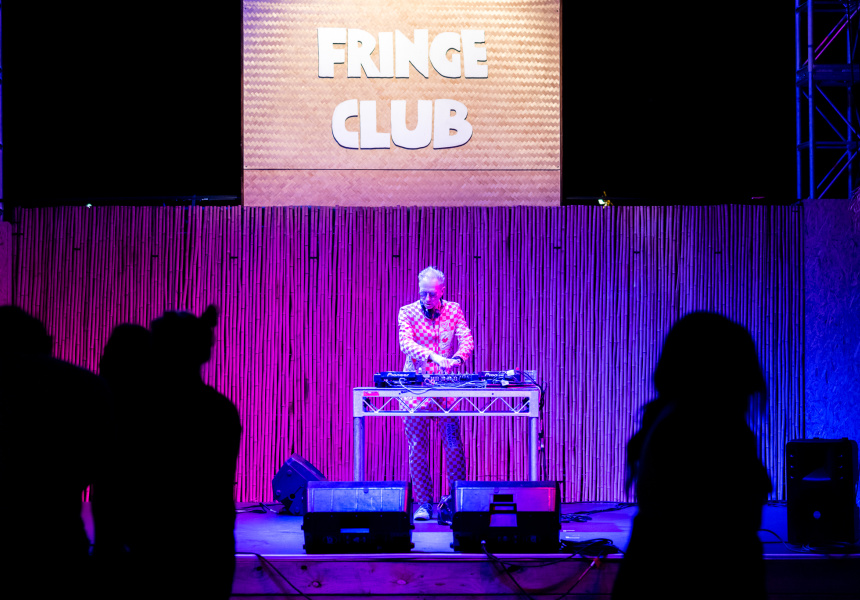 When a bunch of performers converge on an artists’ bar to blow off steam it’s absolute mayhem. Welcome to Fringe Club, home to some of the best parties in town.

“I remember a couple of years ago, sitting here and watching a guy climb through the barbed wire,” says Fringe Club manager Zillah Morrow. “Security caught him and walked him straight out. Fifteen minutes later he was coming through the same spot.”

Yes, a barbed-wire-topped fence keeps the rabble out and artists in. You can’t just waltz into the secluded Rymill Park bar. It’s for Adelaide Fringe performers, staff, media and invited guests only. Which is why we thought you might want to know what goes on. Broadsheet ventured behind closed doors on a Saturday night to watch Morrow’s shift unfold.

“When you can’t get in somewhere you wonder why,” she says. “That’s part of what makes Fringe Club so great. It’s somewhere artists can chill out.”

By night, well, we’ve even spotted security throwing shapes on the dance floor.

Melbourne-based Morrow jets in to Adelaide months in advance to prepare for the onslaught. The hours are long – she regularly gets home at 5am – but the memories are worth the fatigue.

“I have so many, but a lot I can’t share,” she says. Many involve Fez Faanana, creative director of The Briefs Factory, which puts on shows, club nights and events. Faanana helps curate the line-up of performers who hit the Fringe Club main stage each night. One moment you’re watching a semi-naked fire breather, the next a hyperactive comedian. You might catch Hot Brown Honey’s DJ-set, or see Rhino Room go up against Tuxedo Cat in the annual Beyonce dance-off.

There’s glitter everywhere – on bare chests, smeared across faces and scattered where the sun don’t shine.

“I went to the toilet once and about 30 grams of glitter fell out of my undies,” says a musician as she whizzes past on roller skates. “It freaked me out. Later I realised someone must have poured it down my pants.”

Weird stuff happens when creative folk get together.

“There was a time I made out with a bearded man who was wearing a mankini and sequins,” says a photographer. “It was to the strains of Tina Turner's Simply the Best.”

Then there’s the time actor Jason Momoa, aka Khal Drogo in Game of Thrones, turned up and attempted to dirty dance with a lucky local lass.

Love is in the air, everywhere you look around.

Comedians wiggle it, just a little bit, and on stage, a journalist (me) and a cabaret performer go head-to-head in a peanut butter eating competition. No one is sure why, not even us.

“One year [backstage] we had a bunch of beanbags that became known as The Cuddle Puddle,” she says. “Basically, everyone who worked in the Fringe Club and the performers who were on the stage would end up holding each other and touching each other in these beanbags.” She grins. “We shared so much love. Beautiful moments like that stand out.”

We don’t all get to caress famous folk backstage but when the clock strikes three a.m., and the music stops and dance floor dalliances end, it feels like we’ve experienced something special.

We have glitter in strange places, unexplained bruises and will smell like peanut butter for days but you can’t wipe the smiles from euphoric dials.

For a moment, in a world of stress, violence, liquor laws and lockouts, we found our happy place.

Fringe Performers get Mondays off so Sunday night is particularly eventful. See you on the D-floor.

Adelaide Fringe runs until March 14. Fringe Club is located in Rymill Park. If you can’t blag a plus one, we recommend late-night shows Massaoke (The Garden of Unearthly Delights), comedy at Rhino Room and The Producers and Tuxedo Cat shindigs.