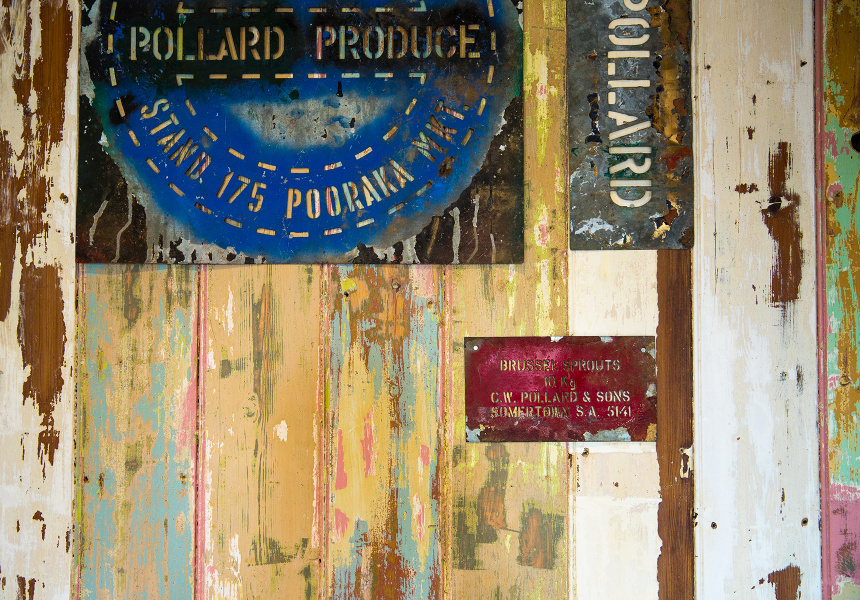 It’s not every day you get to (legally) urinate in a beer keg. But that’s the kind of quirky touch you’ll find at the newly renovated Uraidla Hotel. It’s a nod to the venue’s history as a “man’s pub”, and one of the few you’ll find, as the historic building is now a busy, market garden-inspired Adelaide Hills haunt.

“I really wanted to showcase this area,” says creative director and designer Julie Peter, who owns the pub with husband Ed. “Unfortunately the market gardening up here in Piccadilly, Uraidla and the Summerton area died a bit over the last 15 years.”

Other talking points include rusty windmill light features, barbed wire wall hangings, and table bases and bathroom taps made from garden pipes. Vintage lamps attached to a table (suspended upside down from the ceiling) are a head-spinner, too.

Julie designed them all, and every piece has a story. “The windmill came from a girlfriend of mine who lives north of South Australia, on a station,” she says. “She brought it across in a horse float.”

The Uraidla, which officially re-opened on August 19, was a big project for the Stirling-based couple who already had the transformation of The Stirling and The Crafers hotels behind them. “It’s about keeping these beautiful old pubs alive,” Julie says. “Australian towns are centered around their pubs, so when the pub closes it’s sad for everybody.”

The recent opening of Lost in a Forest wine and pizza lounge also put the spotlight on Uraidla.

“Hopefully it will really become a destination for people,” Julie says. “I’ve had locals on Facebook tell me they were thinking of selling up and they’ve changed their mind now.”

On the plate it’s all about hearty pub food made with produce from surrounding areas. Starters (“early crop”) include a ploughman’s plate, smoky barbeque ale beef ribs, and beetroot and quinoa fritters. The “main crop” boasts a buffalo burger, SA market fish and chips, classic or parmi schnitties, roasted baby butternut, Berkshire rolled pork belly, and grass fed 300g sirloin. The wine list is long and the majority of drops are local. There’s an impressive dessert and kid’s menu, too.

Head chef Anna Kittell is a Hills girl and was inherited when the Peters purchased The Crafers Hotel. “She took a break then decided she really loved the concept of what we’re doing here,” Julie says. “One of our big focuses is on employing locals and she’d love to train young people in the kitchen and help them make a career out of it.”

Phase two of the renovation includes a function room at the rear of the pub, upstairs lounge areas, and a big glasshouse looking out over the town’s oval.

Pending council approval, the couple also has big plans for the space adjacent to the hotel. “We’ll have a brewery, a distillery, a bakery, and a cafe.”