From its sleek and minimal fit-out to the compact menu – including pork-neck skewers, special fried rice and Taipei-style cold noodles – the intimate new wine nook is a lesson in restraint. In Japanese, yuiitsu muni means “one and only”. It’s a fitting description for Muni, a sleek new natural-wine bar and restaurant that opened in Willunga in October, 2021. Situated on the historic High Street, surrounded by a pub, a general store, a butcher shop and a bakery, it’s like nothing else in the township. But the same sense of community and regional hospitality you’ll find in nearby venues is alive and well here.

When Broadsheet visits during a trial run ahead of its public unveiling, the room is packed with winemakers. It’s testament to the relationships co-owners and chefs Mug Chen, Chia Wu and Violette Flint have developed with the local wine community. “They’ve all been very welcoming and supportive – sharing their stories and their knowledge with us,” says Chen.

That same sense of community is evident in the food menu, which is shaped around local produce, much of it from the Willunga Farmers Market or nearby suppliers. The wine-friendly share plates feature Taiwanese influences, courtesy of ex-pats Chen and Wu, who moved to South Australia after collectively clocking up time in Melbourne, Paris and Bangkok kitchens. There’s marinated cucumber with Jauma Farm vinegar, Sichuan pepper and shrimp chilli oil; wood ear mushrooms with house-made soy sauce, garlic vinegar and basil from the farmers’ market; and seasonal market greens cooked on the hibachi grill.

The emerging crowd favourite after opening weekend is the Taipei-style cold noodles dressed in sesame sauce. “I think that one’s our most popular dish – a lot of tables ordered one, and then ordered it again,” says Chen. “It looks plain but then you have it and I think it blows a lot of people’s minds because they’re not expecting that much flavour. But it’s still really light.”

There’s also Matsusaka pork-neck skewers (Chen: “That cut is really popular back in Taiwan … it brings me back to my memories of the night markets”) served with golden kimchi, which is made with fresh rather than fermented Chinese cabbage and coloured with pumpkin. “I think the freshness really goes so well with our wine, because our wine is very delicate,” says Wu. “We make a lot of adjustments to [traditional] recipes to go with the wines.”

The Japanese-style special fried rice replaces long-grain rice with sushi rice, which gives it a chewier texture, says Chen. “It takes some time to process. I have to cook the rice two days ahead, then dry it in the fridge so it’s almost dehydrated rice. Then it’s added to the [wok] and becomes soft but still textural … And we cook every order [separately] in front of customers so it’s kind of like a show for the people [sitting] at the bar.”

On Saturday nights, there's a set menu degustation of finer dishes that includes amuse-bouche, an entrée, main and dessert with wine pairings.

The venue’s minimalist Sans-Arc Studio fit-out is inspired by the Japanese concept of wabi-sabi, which finds beauty in imperfection and incompleteness. Or more specifically, simplicity, modesty and intimacy. The space is all timber, concrete and steel, with a beautiful archway, a wall of wines, and little else in the way of design accents. The small site has 32 seats in total, 13 of them at an L-shaped bar for diners and imbibers to sit and observe the action in the kitchen.

This article was originally published on October 20. Menu items may have changes since. 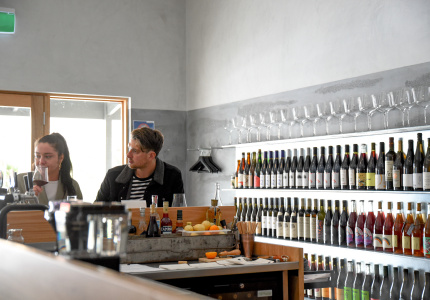