After three years running his “nuggeteria” as a food truck, Chet O’Brien-Tilbrook shifts gears with his first bricks-and-mortar site. Dine-in for loaded nuggets, sandwiches and cocktails. Or roll through at lunch for coffee and sangas to-go. After three years on the move with his shipping container pop-up Motherlode Nuggeteria, Chet O’Brien-Tilbrook has put down roots on Hindley Street – in a 50-seat restaurant and bar in the former Mr Kim’s site.

Behind the faux-shopfront – inspired by New York bodegas with shelves lined with beer cans, soy sauce bottles, milk cartons and packets of mi goreng – the chef has been perfecting his opening week offering.

“I asked for feedback on almost everything – food, staff, decor, drinks – and everyone has been overwhelmingly positive about what we’re doing,” he tells Broadsheet.

It’s testament to the man’s dedication to elevating the humble chicken nugget, which come marinated at Motherlode in either buttermilk (with or without parmesan), laksa (with coconut panko crumb and pickled chilli), coconut (with pickled pineapple salsa) and jalapeño honey butter glaze and paired with either pink mayonnaise, house mayo, a laksa one or kewpie. You can also sub in fried cauliflower and vegan sriracha mayo.

“The most popular are our laksa nuggets, which I sort of knew would happen,” says O’Brien-Tilbrook. They were a hit at Motherlode’s food van, which has been a popular presence at festival hubs such as Royal Croquet Club and Garden of Unearthly Delights. The crisp, succulent nugs are marinated in coconut and laksa and crumbed in a coconut and panko crumb, then garnished with fresh coriander and pickled chilli.

Lunch is a pared-down affair – a chicken nugget sanga on a dusty sourdough roll with pickled onions and lettuce or vegan cauliflower option, plus filter and nitro coffee and other drinks – available to eat-in or take away from a service window at the left of the shop.

“For lunch, it’s very relaxed and then dinner is all about making sure, when people come in, they are being looked after,” says O’Brien-Tilbrook. “It’s essentially comfort food they are eating, so the aim of the staff is to make everyone feel as comfortable as possible.”

To drink, there’s Young Blood lager and Little Bang Green Apple on tap; “winemaker of the month” Konpira Maru by the bottle or glass; and cocktails, including hard cherry cola and hard lemonade. Plus no-booze options.

O’Brien-Tilbrook and business partner Paul Glen (who also owns Rocket and Electric Circus in the same building) have designed the space themselves. Chicken-shaped neon signs and bright yellow counters bring a splash of colour to the cement-toned walls and tiled surfaces. A set of booths run along the right side of the room, with bar seating overlooking the kitchen and the street-facing window. Communal tables fill the back of the restaurant.

“I want people to be able to walk in and get whatever they want, be it a drink, a beer, a sandwich, or even set up their laptop to do some work,” says O’Brien-Tilbrook. “That’s the vibe I’m going for.” 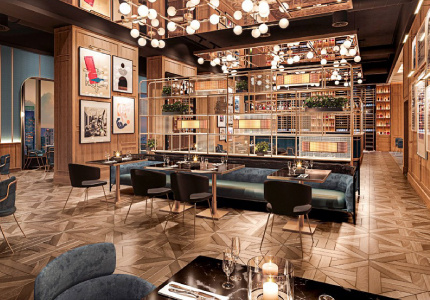